Global VC funding for the solar sector was totaled $889 million during the 9-month period of 2018, a 10% decrease compared to previous year 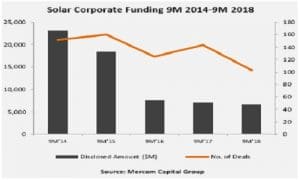 Global corporate funding, including venture capital (VC) funding, public market and debt financing, for the solar sector declined by around 5.6% to $6.7 billion in the first nine months of 2018. The overall funding raised during the same period in 2017 was $7.1 billion, according to Mercom Capital Group – a global communications and consulting company, focused on clean energy and financial communications.

There were 103 deals in the period January-September 2018 as compared to 143 deals in during the same period last year, as per the data compiled by Mercom Capital Group.

Citing the reason for decline in funding, Raj Prabhu, CEO, Mercom Capital Group, said, “Decline in solar demand around the globe has had a strong effect on corporate financing activity in solar especially with most solar company stocks in the negative territory at the end of the third quarter.”

“M&A activity, on the other hand, has remained robust especially project acquisitions,” he added.

Global VC funding, including venture capital, corporate venture capital and private equity, for the solar sector was totaled $889 million during the 9-month period this year, a 10% decrease compared to $985 million raised in the same period last year.

In the third quarter of 2018, VC funding for the solar sector was constant with $359 million raised in 12 deals compared to $370 million raised in 15 deals in the previous quarter. In Q3, a total of 25 VC investors took part in solar funding.

In Q3 of 2018, the top VC deal was of $200 million raised Cypress Creek Renewables, followed by Nexamp’s $54 million, Cleantech Solar’s $50 million, Arcadia Power’s $25 million and $10 million by Pegasus Solar, as per the Mercom’s data.

However, solar public market funding saw an increase in the 9-month period, with $1.8 billion raised in 14 deals as compared to $1 billion in 23 deals in the previous year.

In the first nine months of 2018, debt financing activity declined by around 21% to $4 billion in 40 deals from $5.1 billion raised in 51 deals in the previous year.

The solar funds in announced residential and commercial project totaled $1 billion during January-September 2018, compared to the $2.2 billion during the same period in the previous year.

M&A transactions were up