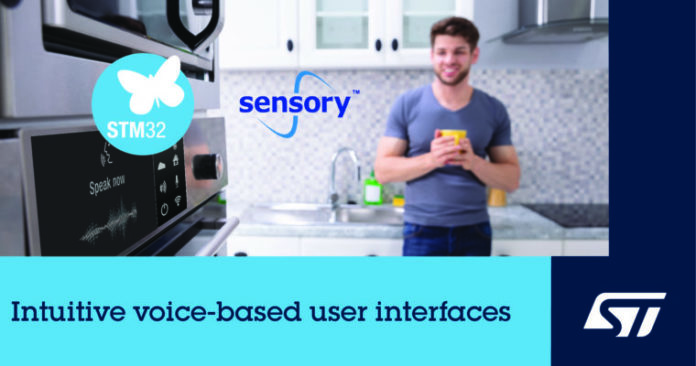 STMicroelectronics and Sensory Inc., have announced a collaboration that will enable the STM32 microcontroller (MCU) user community to develop and prototype intuitive voice-based user interfaces for a wide range of smart embedded products.

The solution is based on an STM32Cube software extension package and runs on a high-performance STM32H7 MCU, taking advantage of its architecture, internal Flash, SRAM, and high CPU speed. This combination plays a key role in increasing voice-control accuracy and minimizing command-recognition time. Hosting the voice application and speech models in the generous on-chip memory of the high-performance STM32 MCUs further boosts the system integration and ease of use, as well as lowers cost of ownership.

“This collaboration sets to jump-start the development of embedded-voice user interfaces, adding friction-free command control and custom wake word to any device, from wearables to smart-home appliances,” said Ricardo De Sa Earp, Executive Vice President, General-Purpose Microcontroller Sub-Group Vice President, STMicroelectronics. “The unique combination of ST and Sensory technologies will enable the STM32 user community to deploy ‘Voice AI on the edge’ without any programming, data-science, or machine-learning expertise, for free in prototypes and with favorable licensing terms in production.”

“Sensory designed our VoiceHub so developers could quickly and painlessly create custom speech-recognition models. However, after creating a custom model, integrating the model onto hardware, and moving to licensing terms were the next hurdles that needed to be cleared,” said Todd Mozer, CEO, Sensory. “This world-class collaboration with ST creates a complete software, hardware, and licensing package for embedded speech recognition across the STM32 family and makes adding Voice UIs, simple.”

STMicroelectronics Recognized With ‘A’ score for Transparency on Water Security

Smartphone Price Observations for 2021 and Outlook for 2022