Union Budget 2014: Top 10 announcements for electronics, solar and IT industries 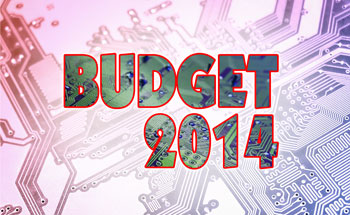 Friday, July 11, 2014: As anticipated, the Narendra Modi led government is poised to pay a lot of stress of towards the development of electronics and IT sector in the country. Here are the key announcements that Finance Minister Arun Jaitley made while presenting the budget before the parliament today:

The demand for electronics is growing very fast. To boost domestic production and reduce our dependence on imports, I intend to take the following steps:

• Impose basic customs duty at 10 percent on specified telecommunication products that are outside the purview of the Information Technology Agreement;

• Exempt all inputs/components used in the manufacture of personal computers from 4 percent special additional duty (SAD);

• Exempt 4 per cent SAD on PVC sheet and ribbon used for the manufacture of smart cards.

The debate whether to introduce a Goods and Services Tax (GST) must now come to an end. We have discussed the issue for the past many years. Some states have been apprehensive about surrendering their taxation jurisdiction; others want to be adequately compensated. I have discussed the matter with the States both individually and collectively. I do hope we are able to find a solution in the course of this year and approve the legislative scheme which enables the introduction of GST. This will streamline the tax administration, avoid harassment of the business and result in higher revenue collection both for the Centre and the States. I assure all States that government will be more than fair in dealing with them.

India today is the largest buyer of Defence equipment in the world. Our domestic manufacturing capacities are still at a nascent stage. We are buying substantial part of our Defence requirements directly from foreign players. Companies controlled by foreign governments and foreign private sector are supplying our Defence requirements to us at a considerable outflow of foreign exchange. Currently we permit 26 per cent FDI in Defence manufacturing. The composite cap of foreign exchange is being raised to 49 per cent with full Indian management and control through the FIPB route.

To encourage development of Smart Cities, which will also provide habitation for the neo-middle class, requirement of the built up area and capital conditions for FDI is being reduced from 50,000 square metres to 20,000 square metres and from USD 10 million to USD 5 million respectively with a three year post completion lock in.

To further encourage this, projects which commit at least 30 per cent of the total project cost for low cost affordable housing will be exempted from minimum built up area and capitalisation requirements, with the condition of three year lock-in.

As the fruits of development reach an increasingly large number of people, the pace of migration from the rural areas to the cities is increasing. A neo middle class is emerging which has the aspiration of better living standards. Unless, new cities are developed to accommodate the burgeoning number of people, the existing cities would soon become unlivable. The Prime Minister has a vision of developing ‘one hundred Smart Cities’, as satellite towns of larger cities and by modernizing the existing mid-sized cities. To provide the necessary focus to this critical activity, I have provided a sum of Rs 7,0600 million in the current fiscal.

FDI in the manufacturing sector is today on the automatic route. The manufacturing units will be allowed to sell its products through retail including E-commerce platforms without any additional approval.

Tourism is one of the larger job creators globally. Many economies world over are supported by tourism. In order to give a major boost to tourism in India, the facility of Electronic Travel Authorization (e-Visa) would be introduced in a phased manner at nine airports in India where necessary infrastructure would be put in place within the next six months. The countries to which the Electronic Travel authorisation facility would be extended would be identified in a phased manner. This would further facilitate the visa on arrival facility.

There is an imminent need to further bridge the divide between digital “haves” and “have-nots”. For this it is proposed to launch a pan India programme “Digital India”. This would ensure Broad band connectivity at village level, improved access to services through IT enabled platforms, greater transparency in Government processes and increased indigenous production of IT hardware and software for exports and improved domestic availability. Special focus would be on supporting software product startups. A National Rural Internet and Technology Mission for services in villages and schools, training in IT skills and E-Kranti for government service delivery and governance scheme is also proposed. I have provided a sum of Rs 5000 million for this purpose.

* SMEs form the backbone of our economy. They account for a large portion of our industrial output and employment. The bulk of service sector enterprises are also SMEs. Most of these SMEs are Own Account Enterprises. Most importantly a majority of these enterprises are owned or run by SCs, STs and OBCs. Financing to this sector is of critical importance, particularly as it benefits the weakest sections. There is need to examine the financial architecture for this sector. I propose to appoint a committee with representatives from the Finance Ministry, Ministry of MSME, RBI to give concrete suggestions in three months.

* Promotion of entrepreneurship and start-up Companies remains a challenge. While there have been some efforts to encourage, one principal limitation has been availability of start-up capital by way of equity to be brought in by the promoters. In order to create a conducive eco-system for the venture capital in the MSME sector it is proposed to establish a Rs 100,000 crore fund to act as a catalyst to attract private Capital by way of providing equity, quasi equity, soft loans and other risk capital for start-up companies.

* To establish technology centre network to promote innovation, entrepreneurship and agro-industry, I propose to set up a fund with a corpus of Rs 2000 million.

* The definition of MSME will be reviewed to provide for a higher capital ceiling. A programme to facilitate forward and backward linkages with multiple value chain of manufacturing and service delivery will also be put in place.

* Entrepreneur friendly legal bankruptcy framework will also be developed for SMEs to enable easy exit. A nationwide “District level Incubation and Accelerator Programme” would be taken up for incubation of new ideas and providing necessary support for accelerating entrepreneurship.

New and Renewable energy deserves a very high priority. It is proposed to take up Ultra Mega Solar Power Projects in Rajasthan, Gujarat, Tamil Nadu, and Laddakh in J&K. I have set aside a sum of Rs 5000 million for this. We are launching a scheme for solar power driven agricultural pump sets and water pumping stations for energizing one lakh pumps. I propose to allocate a sum of Rs 4000 million for this purpose. An additional Rs 1000 million crore is set aside for the development of 1 MW Solar Parks on the banks of canals. Implementation of the Green Energy Corridor Project will be accelerated in this financial year to facilitate evacuation of renewable energy across the country.