Home Buzz Is the sun shining bright on the Indian solar industry? 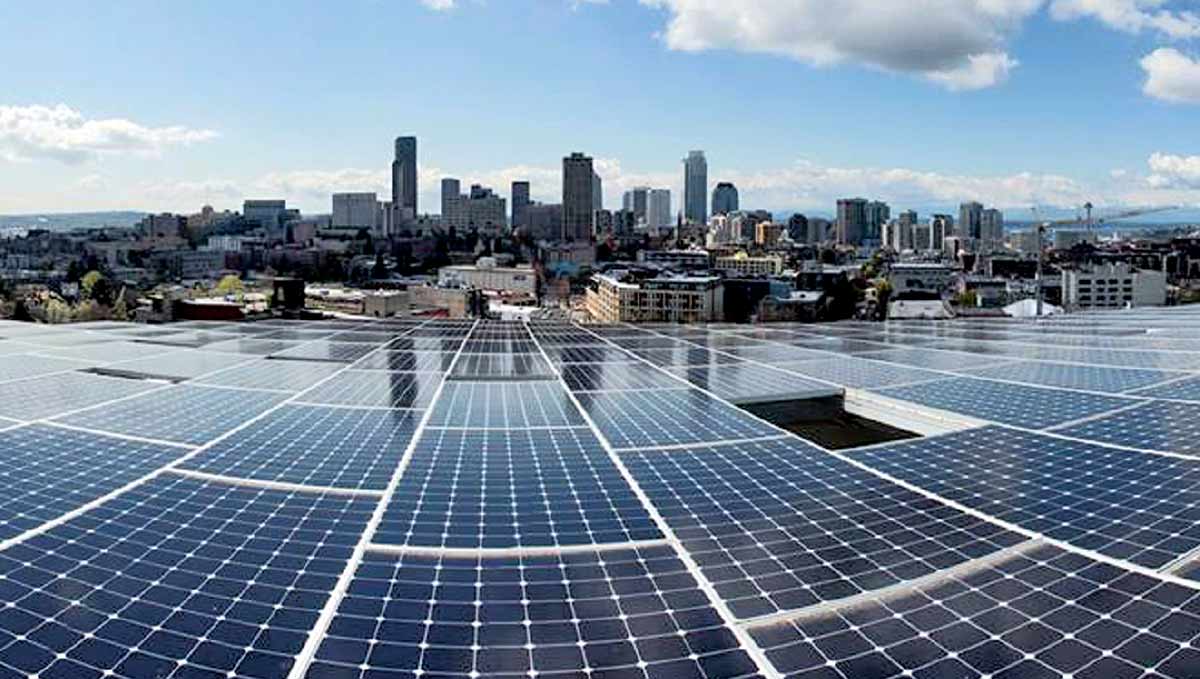 Forty-five per cent of Indian households do not have access to electricity, especially in the rural areas. Thankfully, the solar energy industry has witnessed rapid growth in the last few years and is expected to grow further in the coming years. India is blessed with ample solar radiation, and most parts of the country receive bright sunlight throughout the year. India’s geographical location, large population and support from the government are assisting it in becoming one of the fastest-growing solar energy markets in the world.

In recent years, India has witnessed a tremendous upsurge in the demand for solar products and this is expected to grow further. Gradually, India is becoming a favourable investment destination for both domestic and global solar power players. The government is playing an active role in promoting the adoption of renewable energy resources by offering various incentives, such as generation-based incentives (GBIs), capital and interest subsidies, viability gap funding, concessional finance, fiscal incentives, etc. In order to boost the solar industry, states like Rajasthan and Gujarat have also formulated a regulatory framework.

India added around 2.25GW of solar capacity in Q3 (July to September 2017), which meant a 15.4 per cent growth compared to the 1.95GW added in Q2. According to a recent survey by Mercom Capital, with the addition of 2.25GW in Q3, the cumulative installed capacity between January-September 2017 stood at 7.15GW. The increase in solar capacity in Q3 happened in spite of multiple challenges such as a 14 per cent increase in Chinese module prices pending an anti-dumping case, PPA re-negotiations in many states, lack of suitable infrastructure, customs duty at various ports and lack of clarity on the GST.

Large-scale solar projects accounted for the bulk of installations in 2017, adding up to about 90 per cent (8.63GW) of the total, with the remaining 10 per cent (995MW) coming from rooftop solar installations, Mercom Capital reported. Approximately 10.6GW of large-scale solar projects were under construction, with another 4.3GW of tenders pending auction as of December 31, 2017.

In 2017, Karnataka and Telangana installed the highest amounts of utility-scale solar capacity, adding roughly 2.1GW each. Together, they accounted for approximately 50 per cent of the total capacity added in India in 2017, Mercom researchers found (Figure 1). Andhra Pradesh was ranked third with 1.22GW of solar capacity installed. During Q4 2017, Karnataka led the pack in terms of new solar installations with 948MW of additional capacity, followed by Telangana, which installed 695MW. Most other states recorded less than 200MW of installations during the period. The report found that, in terms of cumulative installations, Telangana became the first Indian state to surpass the 3GW mark in 2017, while Tamil Nadu had the most projects in the pipeline, with an expected capacity of over 2GW.

A recommendation to impose a 70 per cent safeguard duty on solar cells and modules imported from China, Taiwan, and Malaysia has been issued by the Directorate General of Safeguards, Customs and Central Excise. The development has caused major headaches for solar project developers, since project costs will spike if access to cheaper components is cut off.

The Mercom report also notes that even though the Madras High Court has placed a temporary stay on the safeguard duty, the unexpected and aggressive recommendation has brought the industry to a standstill. Developers are afraid to start projects and suppliers are hesitant to ship panels until they know just when or how the duty will be imposed.

Despite the challenges, solar power overtook coal in 2017 to become the top source of new power generation additions in India for the first time ever, according to the Mercom report. The shift came after the price of developing new solar projects fell below the cost of adding coal-fired capacity. Solar accounted for the largest portion of new capacity additions, at 45 per cent, compared to coal’s 19 per cent (Figure 2).

The report noted that distribution companies (discoms) are very willing to procure solar at the current tariff levels of under
₹ 3.00 (~US$0.047) per kWh, as it is cheaper than coal at this price point. But the imposition of any additional duties would make solar far more expensive and discourage new procurement by financially strapped discoms.

Safeguard duty – A bane or a boon?
The Indian solar sector is heavily dependent on imported solar modules, with around 89 per cent of these modules coming from outside India (85 per cent come from China). This poses a serious threat to domestic manufacturers.

On December 5, 2017, five domestic manufacturers—the Adani Enterprises-backed Mundra Solar PV Ltd, Indosolar Ltd, Jupiter Solar Power Ltd, Websol Energy Systems Ltd and Helios Photovoltaic Ltd, filed an application seeking a duty on imported solar cells, whether or not assembled in modules or panels. Acting on this, the Directorate General of Safeguards, Customs and Central Excise proposed imposing a 70 per cent safeguard duty on cells and modules being shipped from China and Malaysia. It recommended the levy remain in effect for 200 days.

However, the All India Solar Industries Association (AISIA) has said that the proposed safeguard duty on imported solar panels and cells will adversely impact solar manufacturers operating out of Special Economic Zones (SEZ) across India. AISIA has opposed the proposed safeguard duty on all imported solar panels and cells, and asked for specific anti-dumping duty only on low quality Chinese solar modules that are flooding the Indian market. In India, the SEZ units are treated on par with foreign manufacturers, and hence, any safeguard duty would be detrimental to the Indian solar industry as a whole, the AISIA felt.
However, there are many others in the Indian solar industry who believe that anti-dumping duties will threaten the Indian solar market, by making solar projects costlier at a time when the government has made its intention to boost the solar energy sector, very clear.

Projections for the ongoing year and beyond
Despite the strong growth in earlier months, the Indian solar sector witnessed a steep fall in October and November 2017 as it was battling flat power demand and rising solar panel costs. However, a change in scenario was noticed in December 2017, when around 3GW worth of projects were auctioned and tendered by the SECI (Solar Energy Corporation of India Ltd) and various state governments, including 1.3GW by Maharashtra, 860MW by Karnataka and 750MW by SECI.

After months of a dry pipeline, the Indian solar power sector is off to a good start in 2018 as the industry now has over 4GW of projects that can be executed across the country. This year, the first week in January saw SECI tendering out over 1.2GW of projects, including 750MW in Andhra Pradesh, 200MW in Karnataka, and 275MW in Uttar Pradesh.

In order to commission the targeted 60GW of grid connected solar power projects by 2022, in November 2017, the Ministry of New and Renewable Energy (MNRE) promised to open bidding for 3GW of solar projects in January 2018, 5GW in February and 6GW in March 2018. However, in the recently released report, Mercom forecasts that total installations will fall by 22 per cent year-over-year to approximately 7.5GW in 2018.

Various policy measures have been initiated and special steps taken, in addition to providing financial support to many schemes being implemented by MNRE, to achieve the targeted 175GW of renewable energy by 2022. In order to get to this goal, major programmes and schemes like the implementation of solar parks, solar rooftop schemes, solar defence schemes, solar PV power plants on canal banks and canal tops, solar pumps, etc, have been launched during the last two years (According to the Year End Review 2017 –MNRE by Press
Information Bureau). With all the initiatives and plans in place, India’s solar future seems to be brighter than ever!