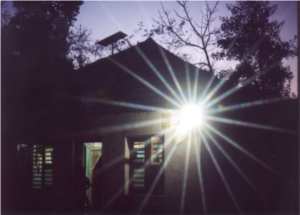 At a time when globally concerns have been voiced about the need to develop renewable sources of energy to meet the world’s growing power demands, given the earth’s depleting power sources like coal, a little known Vijaywada-based company has stumbled upon a fix that, if developed well, could change the pattern of mainstream power usage of at least the solar sector.

Jyothi Solar Power Projects recently laid claim to have developed a technology that instantly converts solar energy into electricity. The technology, say company officials, makes use of two existing technologies by using photo-volatic panel systems that can convert as much as 91 per cent of the sun’s energy into directly usable power.

According to P Lakhsminarayana, director-technical, at Jyothi Solar Power Projects, the company is currently in the process of getting patent clearances post which, it will look at a mainstream application of the technology.

The system, says Lakhsminarayana, is inclusive of ‘Twintin’, a mechanism that works backed by sensors which are capable of synchronizing PV panels in line with the movement of the sun. This ensures maximum utlilisation of the sun’s heat. The process works in tandem with a Multi-Junctional Device (MJD) and Nano technology, which then can immediately convert solar energy into electrical power.

The discovery, incidentally comes at a juncture when the country is facing major power crisis with states like Tamil Nadu, Rajasthan and Bihar being the worst affected for want of electricity-back up.

The company claims that the product itself should hit the market within a few months, because that is the expected time that it will take for the necessary approvals to come through. “We have already got patent approvals by the Indian Research Association,” says Lakhsminarayana. Besides this, the central government is expected to give royalty to the company over the next 20 years for the first international research patent.