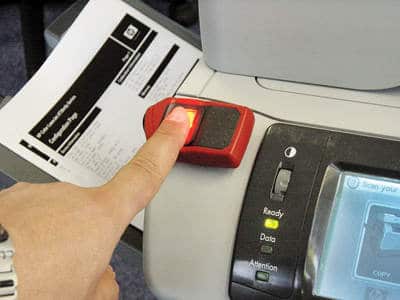 With government projects like e-passports, national ID projects, employee benefit schemes and the UIDAI project in full swing, biometrics is poised to grow at a CAGR of 42.4 per cent by 2014. As Deepa Doraiswamy, industry manager, electronics and security practice, Frost & Sullivan, South Asia and Middle East, puts it, “The size of the biometric readers market was US$ 50 million in 2011, and is further expected to grow at a 48 per cent CAGR to touch US$ 359 million by 2016.” And the impetus to this scorching growth has mainly been provided by the increasing security concerns within India.

Biometrics is gradually gaining ground and pushing out conventional methods of identification and security checking like being physically frisked, photo IDs, tokens and passwords. This emerging technology is growing fast as it is being rapidly adopted not only in the private sector but in various government projects as well.

The application of biometrics technology is increasing day by day. Today, it is very useful in enterprises and manufacturing facilities where it is used for recording employee attendance and work timings. Manufacturing units are manpower intensive, so biometric devices help control access at the door or facility level.

“The most prominent biometric implementation in India, both in volume and value terms, is the UIDAI project worth US$ 3.33 billion. Technology acceptance and ease of usage is favouring the market adoption for biometrics,” says Doraiswamy. After a major scam in pension distribution, the government is now distributing biometic cards for the pension holders in every state. This scheme will provide good business opportunity as all districts, taluks and villages will be covered under this scheme.

Another factor that is slowly increasing biometric reader adoption is the reduced cost of the devices and equipment. Earlier, an iris scan camera used to cost a few lakhs, but now one can buy it for Rs 25,000.

Biometric devices are also being increasingly used in rural areas where identification is a problem and one individual has more than one ration card. Banks like the State Bank of India are making efforts to introduce biometrics technology in the rural sector.

Due to India’s large population, individual identification is a major obstacle, especially in rural areas; hence, biometric devices can sell well here. Moreover, as this technology can record the time and attendance of employees, it has gained better acceptance across verticals.

However, although the UID project has made fingerprint and iris scanning mandatory for all enrolments, there are only a few types of iris scanners available in India. These products are all imported, and hence, are very costly. This has significantly increased the cost of the UID project. But this issue is slowly getting resolved as domestic players are taking interest in manufacturing. For example, BioEnable, a leading supplier of biometric products in India, has launched its first iris scanner, which has been developed and manufactured in India. BioEnable Iris One is a computer based USB plug and play device that captures high resolution iris images as per international standards. So there are plenty of opportunities for channel partners and manufacturers in this domain.

“Considering the importance of iris recognition to the UID Aadhaar project and the high cost of iris scanners available from a few international manufacturers, we decided to develop our own iris scanner. We will soon send it for certification prior to its use in various government projects,” says Pradeep Bhatia, managing director, BioEnable.

Despite the market’s potential, biometrics technology has to go a long way to be accepted by all and to inspire manufacturers in India. Lack of a unified standard for biometric readers, inadequate expertise, limited investments, and poor awareness are holding back the market from meeting its potential. India has not yet started manufacturing biometric devices locally (BioEnable Iris One is the first domestic product) because the sensors have to be imported. And due to the low cost of imported products, the market is flooded with low quality and cheap devices. It is high time that players stop importing and start manufacturing these devices.