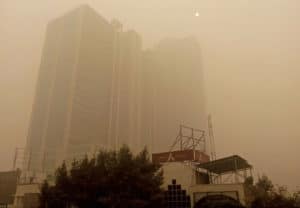 With the quality of air in most big cities deteriorating due to a host of reasons, air purifiers will soon become as essential as water purifiers in homes and offices. Fortunately, there is a lot of research and development happening in this space.

Today, most people suffering from chronic respiratory ailments like asthma, especially
in the cities, have air pollution to blame. According to the third edition of ‘The State of Global Air 2019’ report, brought out by the non-profit Health Effects Institute (HEI) and posted on its website, the situation is only getting worse. Air pollution is the fifth leading risk factor for mortality. Worldwide, it reduced life expectancy by one year and eight months, on an average, in 2017. Apart from air pollutants in vehicular emissions, human health is also adversely impacted by the exhaust from industries, agricultural activities, and so on. This is pushing every sector to not only switch from unsustainable methods of growth to renewable energy based solutions, but also to develop sustainable remedies to deal with the existing problem.

Air purification can combat the adverse effects of pollution when properly implemented. The Air Quality Index (AQI) is based on pollutionrelated parameters such as PM2.5 and PM10 (which are units describing the particulate matter in the air), and others that accurately measure the level of gases like sulphur dioxide, carbon monoxide and ozone present. These measurements help in deciding whether or not air purification is needed in a particular area.

Air purification should be done in such a manner that there is no further harm to the environment during the process. To serve a large population, we need inexpensive yet highly efficient air purification systems that can cover a large area effectively, such as bus stands, traffic signals and hospitals. In China, for instance, a solar based air purification tower approximately a hundred metres high was built to reduce smog levels at Xian in Shaanxi province as an experiment, a few years ago. Greenhouses at the base of the tower trap the polluted air where it gets heated up by the sun’s rays, in a manner similar to that seen in the solar updraft tower for power generation. The hot air thus produced rises through the tower and passes through multiple layers of cleaning filters.

Growing awareness has made companies realise the importance of small-scale air purifiers for use in homes, cars, offices and other commercial areas too. These air purifiers perform the same function as huge air purification towers, that is, they can be used to get rid of dust particles, dust mites, smoke particles, vehicle emissions, and gaseous pollutants, among others, but the area covered is small. 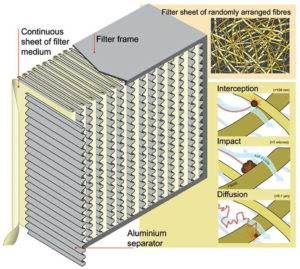 The way air purifiers work Air purifiers rely on multiple or compound filters to clean air by removing suspended particulates through mechanical separation. The clean air delivery
rate (CADR) is the unit that measures how many cubic feet of air a purifier can filter in a minute. The higher the CADR, the better the filtration. Fans suck the unclean air from the environment and send clean air outside. The placement of the purifiers is also important.

They should be given enough room to allow proper circulation of air. Besides cleaning the air, air purifier-humidifier combinations increase humidity levels in indoor environments to relieve dry skin and eyes, reduce allergy and asthma symptoms, and the like. The popularity of smart air purifiers is also growing as they can be conveniently controlled via Wi-Fi and Bluetooth, remotely.

Care must be taken to ensure that there are no hazardous by-products. For example, using an ozone air purifier is not advisable. It can be dangerous for human health because the electromagnetically charged particles generate ozone in the process of purification, which can cause breathing issues, the US’ Environmental Protection Agency (EPA) reports.

Solar-powered air purifiers
The demand for eco-friendly, economical and energy-saving purifiers has led to the development of solar purifiers. These are usually powered through the electrical mains but use solar energy when the mains are off, which can be highly beneficial in remote households that are off the electrical grid. This also ensures lower electricity consumption and operational costs.

Solar-powered air purifiers are popular in the United States, China, South Korea, and the Netherlands. Portable solar purifiers for cars are the most common as of now. In terms of the technology used, high-efficiency particulate air (HEPA) filters are the preferred choice due to their advanced purifying process. These air purifiers usually have nano activated carbon to absorb car odour and HEPA filters to purify miniature dust particles. Manufacturers of such air purifiers include Xuyi Suyuan Technology Co. Ltd, Shenzen Nanbai Technology Co. Ltd, Olansi Healthcare Co. Ltd, among others. But the alternative charging efficiency of solar purifiers is not that high yet.

The future
In developing countries like India, despite high levels of pollution, the purifier market is still in its nascent stages due to the high initial costs and the additional recurring costs of replacing filters every few months. However, sales are expected to surpass that of developed countries in the coming years, according to a recent report from Research and Markets. Indian companies such as Ananya Solar Technologies and GRS India provide solar air purifying solutions.

Using solar power is not the only sustainable option when it comes to purifying air. Students at Lovely Professional University and researchers at the Indian Institute of Science Education and Research (IISER) in Mohali in Punjab have developed an algae-based air purifier that increases the amount of oxygen in the air through photosynthesis, aside from neutralising the air pollutants. This process also produces biomass as the by-product which can be used for energy generation.

Biotech startup Artveoli from California’s Silicon Valley has also built an air purifying device to convert carbon dioxide into oxygen inside homes and offices. It employs the photosynthesis process of the algae inside microfluidic plastic chips. Microfluidics is a field of research that deals with the study of fluids at the microscale to optimise their use in different applications, in order to increase the overall capacity to purify a larger volume of air—in this case, by controlling the growth of algae. Instead of filters, the biodegradable cartridges need to be replaced for this product.