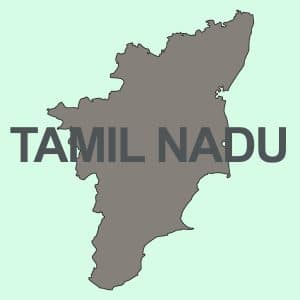 As India geared up to become a major manufacturing hub and investment destination, individual states like Karnataka, Delhi and Maharashtra took the initial lead. Now, other states are also moving up in the rankings and attracting large businesses. Tamil Nadu, the southernmost state of the country, is one such shining example.

Located in the south of India, Tamil Nadu is surrounded by the Bay of Bengal in the east, the Indian Ocean in the south, and the Western Ghats and the Arabian Sea in the west. Due to its strategic location, the state’s capital, Chennai, has become the centre of commercial activity. Its climate is conducive to year-round port operations, which is a major point in its favour. It has a good network of banks and financial institutions. In addition, it has a modern telecommunications infrastructure. There are three modern ports and 16 small ports; two of these—Chennai and Thoothukudi (Tuticorin)—have container handling facilities.

Tamil Nadu has the third largest economy among the Indian states. Currently, the state’s official gross domestic product (GDP) exceeds US$ 23 billion. According to the purchasing power parity (PPP) model, this translates to approximately an economy that has a GDP of US$ 100 billion. Over the years, the average economic growth rate in Tamil Nadu has remained around 6-7 per cent, which is much higher than the average growth rate of Indian states.

In the 2018 NCAER (National Council of Applied Economic Research)-State Investment Potential Index Overall Rankings report, Tamil Nadu has moved up four ranks from the previous year, and is now ranked the second most attractive state in India for investments. Tamil Nadu has become a popular investment destination on the basis of its unique economic structure. The state is home to more than 100 industrial parks, including developed land, for those who want to start a new business. Unlike many other states in India, where all economic resources are concentrated in one or two regions, Tamil Nadu’s economic resources are well distributed across the state.

The state has a large number of windmills that it relies on to generate electricity. It is one of the few states in India that sells electricity to others. Tamil Nadu generates more than half of India’s wind energy. The state government operates many large public sector companies in diverse fields like watch-making and paper mills. In short, Tamil Nadu has developed good infrastructure for businesses.

Doing business in Tamil Nadu
Tamil Nadu has a high per capita income, and is one of the most stable and urbanised regions in the country. It is India’s second largest software exporter, in terms of value. The state has the potential to become a preferred international destination for investments and manufacturing. Through a combination of talent, technology and incentives, the state has all the ingredients to achieve its global ambitions of delivering world class products and services. Therefore, a city like Chennai has the opportunity to grow into a global hub.
Tamil Nadu’s growth is driven by the automotive, textile, manufacturing, biotechnology, health, energy, pharmaceutical, animation and the visual effects industries, as well as other areas of IT.

Physical infrastructure
Tamil Nadu is among India’s fastest-growing states primarily because of its strong infrastructure. Its industrial, social as well as physical infrastructure is well developed. The state has a wide network of roadways and railways. There has also been a tremendous rise in the passenger-carrying capacity of the ports.

Financial infrastructure
Chennai is one of the financial hubs of south India. All domestic and international banks have offices in the state and are committed to promoting industrial investments. In terms of bank credit flows, too, Tamil Nadu is among the top 25 per cent of Indian states.

Sustainability factor
Tamil Nadu is one of the most urbanised states in India. In fact, the state’s urbanisation rate rose from 34 per cent in 2001 to 48 per cent in 2011. This has had a negative impact on the environment due to the increased production of hazardous and biomedical waste, higher vehicle and air pollution, and burgeoning energy demand. Tamil Nadu has the opportunity to become a role model for other Indian states through its State Action Plan on Climate Change (SAPCC).

SEZs and ELCOT
The government of Tamil Nadu established the Madras Special Economic Zone (MEPZ) way back in 1984 to promote foreign direct investment. It is one of the seven EPZs (Export Promotion Zones) set up by the government of India, and is a multi-product zone housing 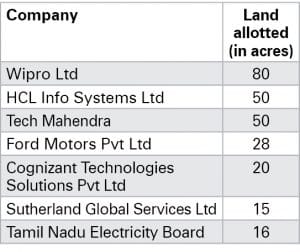 The Electronics Corporation of Tamil Nadu Limited (ELCOT) is the procurement agency for the state government and the nodal agency for major IT projects implemented with the help of funds received from the Ministry of Electronics and Information Technology (MeitY).
ELCOT has created eight IT/ ITES SEZs in Chennai, Coimbatore, Madurai (at two locations), Tiruchirapalli, Salem, Tirunelveli and Hosur. These have now been renamed ELCOSEZs.
ELCOSEZ – Sholinganallur, Chennai: In Sholinganallur, Chennai, an ELCOSEZ has been set up on 377.08 acres, with the state’s investment of ₹ 1.95 billion. This includes the creation of

infrastructure and the construction of administrative buildings. At this ELCOSEZ, 259 acres of land were allotted to seven companies, including Wipro and Ford, on a lease basis, and this has already generated employment for over 57,000 people. 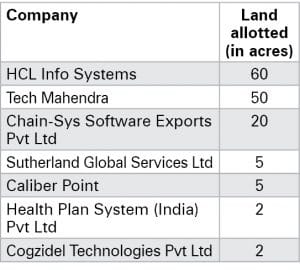 The electronics hardware industry in Tamil Nadu
Today, Chennai has emerged as the largest electronics hardware manufacturing and exporting hub in India. Some of the Fortune 500 companies that have set up manufacturing facilities in the Chennai region are Nokia, Motorola, Dell Computers, Samsung, Foxconn, Sanmina-SCI, Flextronics and Siemens, besides more than 30 component suppliers.

Entrepreneurs and startups
Tamil Nadu is a state of entrepreneurs. It accounts for the largest number of Indian M5MEs (15.07 per cent) in the country, with the number of MSMEs registered being 68,900. ELCOT

has also established a 90-seat startup warehouse at Tidel Park in Chennai, where 17 companies are operating. Thirteen companies have already been successfully incubated here and are now operational.

The aim is to replicate this success elsewhere in the state; so a 50-seat startup warehouse is planned in Coimbatore too, with an investment of ₹ 207 million. Here, NASSCOM will be the knowledge partner. 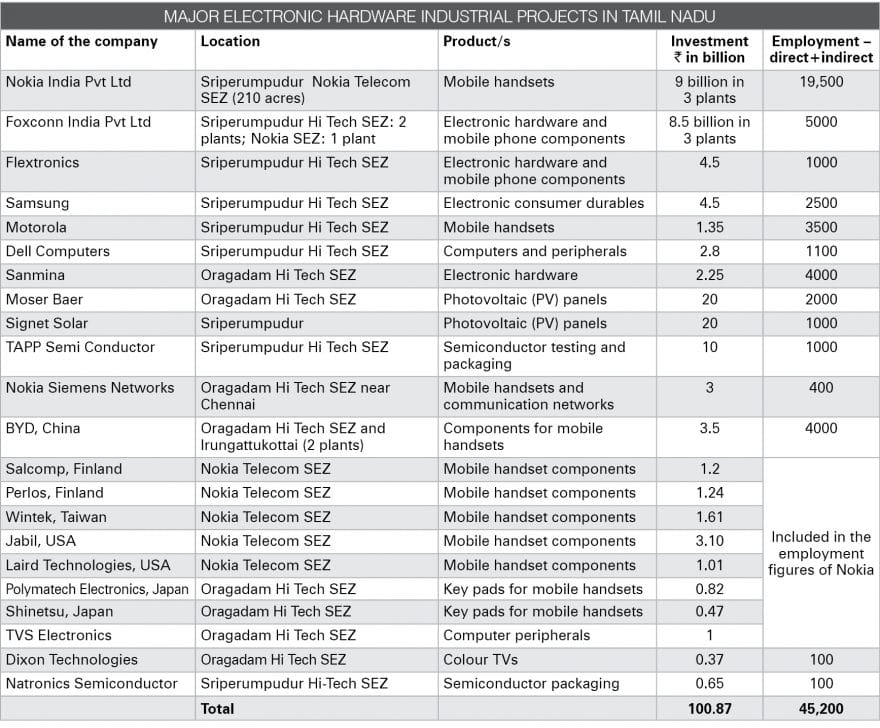 A shining renewable energy sector
Tamil Nadu realised the importance and need for renewable energy, and set up a separate agency, as a registered society, called the Tamil Nadu Energy Development Agency (TEDA) as early as 1985, with the following specific objectives: According to a report by the US based Institute for Energy Economics and Financial Analysis (IEEFA), Tamil Nadu is one of the world’s nine largest renewable energy power generation markets. Tamil Nadu meets 14 per cent of the demand for power in the state from renewable energy and is the only Asian region in the report.

Currently, Tamil Nadu’s installed renewable energy capacity is approximately 10.8GW.
It has the highest wind capacity, with approximately 7.88GW as of March 2017, followed by Gujarat (5.42GW) and Maharashtra (4.75GW). Tamil Nadu is also India’s oldest wind power producer, and most of its wind farms are around 25 years old.