When bricks take on clicks… 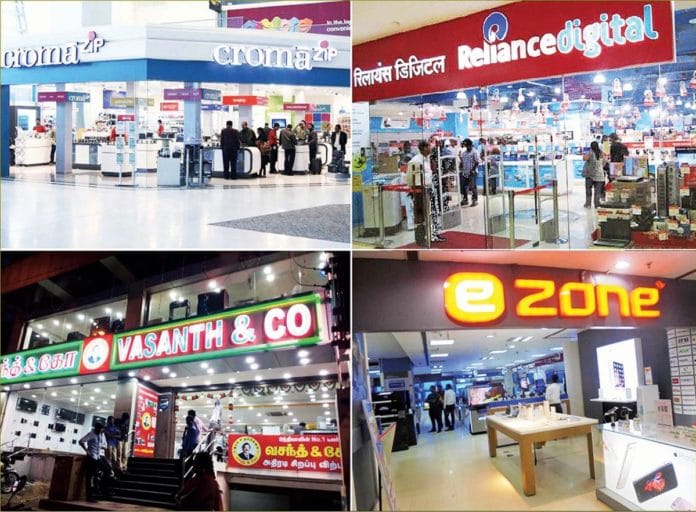 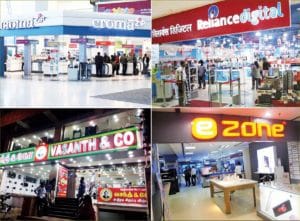 Multi-brand brick and mortar stores are where Indian customers compare and shop for electronics and home appliances. These stores now face a new challenge: e-commerce sites. Are they holding their own, or succumbing?

The retail trade in the US was recently bombarded with an ominous new phrase, coined by the investment research firm CFRA (Centre for Financial Research and Analysis): ‘Death by Amazon’. It is a new index the research firm has created to rate stocks that it recommends for selling, based on a company’s vulnerability to competition from Amazon, the online e-commerce behemoth. Every time Amazon announces that it is entering a new vertical, the value of stocks of existing players in that sector plunge, as investors worry that the online giant will soon scoop up all the sales.

And how did CFRA arrive at the index? It simply compared how much traffic generated by a consumer’s Google search word for, say, LED smart TVs, was going to the website of a particular retailer versus how much was going to Amazon. In CFRA’s initial shortlist of vulnerable retailers were two of the largest electronics retail chains in the US—Best Buy, and the specialist console games chain, Gamestop.

There was a report on the ‘Death by Amazon’ index recently in the Business Insider, the business news website, and one can be sure analysts in other geographies will soon do similar surveys.

Interestingly, the India based electronics and home appliance retail businesses woke up much earlier to the challenge posed by e-commerce giants like Amazon and Flipkart (with its new Walmart backing).

In late 2018, leading consumer electronics retailers, mostly headquartered in South India, like Viveks, Vasanth & Co., Girias and Sathya, approached major appliance manufacturers like Godrej, LG, Panasonic, Samsung, Sony, Whirlpool and others, asking these brands not to allow deep discounting of their products by online vendors. Apparently, the retail store chains received some assurance of parity, because six months later they continue to deal in these brands. But this approach did not work for all brands. Some of the retailers mentioned above decided to stop selling the products of the German brands Bosch and Siemens. There has been no official explanation for this, but industry watchers say this could be because the products of these two companies—best known for washing machines and dish washing machines —were still available at big discounts online compared to the prices that retailers could offer.

Online retailers, Amazon and Flipkart, have generally pleaded innocence by saying they control only the platform, not the price set by individual brands.

New e-commerce regulations kick in
Roughly at this point in time, the government of India decided to step in and frame rules to regulate who could sell online and how they operated. Scattered across the new commerce policy were provisions that sought to regulate how low the online prices could go. The business media in India has condemned these provisions as anti-consumer and needless interference in what is something the market should define.

Be that as it may, the retail electronics chains in India have shown that, unlike their American counterparts, they are not about to roll over and die. They have one big thing going for them —the archetypical Indian customers, who unlike Western buyers, believe in serious touchy-feely comparison shopping before making a purchase that they deem to be paisa vasool.
For this sort of careful buying, there is no substitute for the neighbourhood retail store – which could be standalone or, increasingly, located in a shopping mall—when it comes to buying that smart TV, fridge, microwave or home theatre.

Results from a major study of the Indian electronics and appliances retail market
A major study recently released by the UK based strategic market analyst EuroMonitor, examines for the first time how Indian retailers hold their own against two challenges: the single stores and the Internet marketplace. The report, titled ‘Electronics and Appliance Specialist Retailers in India’ (42 pages, March 2019, US$ 990) analyses key demand trends, forecasts future markets, identifies market shares of international and desi players in India, and suggests strategies for growth.

According to the EuroMonitor study:

In the US, the circumstances may be dire for retailers, who might have to prepare for an early demise at the hands of Amazon. But as studies like this show, Indian electronics retailers are in a position similar to that of the late and great American humorist and writer Mark Twain, who while holidaying in Europe read his own obituary in a home town newspaper. In response, he cabled the paper’s editor: “Rumours of my death are an exaggeration!” Right now, the Indian electronics retail sector could say much the same thing!

The author is the editor at IndiaTechOnline.com.

- Advertisement -
Previous articleCustoms Duty On Intermediate Components – How Costly Will Be The Pay-Off?
Next articleFarmMOJO: An AI-powered mobile app to improve efficiency in aquafarming