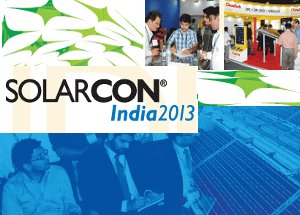 The fifth edition of SOLARCON India, which concluded in Bengaluru, did not draw good response from the industry

Tuesday, August 13, 2013: After concluding the 5th edition of SOLARCON India exposition and conference in Bengaluru on August 5, SEMI India announced that it is discontinuing the annual event from India. SEMI has citied prevalence of “too many shows” in the solar market in India as the key reason behind this decision. “In light of the plethora of solar events in India throughout the calendar year, and in response to the feedback we received from the industry that there are too many shows in this market, we have made the decision to discontinue SOLARCON India, and shift our focus and attention to the needs of our members and other industry stakeholders by focusing on SEMI association services,” said Bettina Weiss, president, SEMI India.

However, according to the industry, the reasons for SOLARCON shutting its shop in India, are entirely different. Poor response to the show this year, solar PV industry not doing well, and no government funds for solar projects, have been cited as the main reasons.

A look at the show statistics reveals that this year SOLARCON India failed to create a buzz in the industry. Compared to the 2012 show, this year there was a decline of around 20 per cent in the number of exhibitors. Also, many of the top solar players that had participated in the previous editions were missing from SOLARCON 2013. Some of missing companies, who had participated last year are Mahindra EPC Services Pvt Ltd, Lanco Solar, Vikram Solar, Waaree, ABB Ltd, Bosch Ltd, Conergy Energy Systems (I) Pvt Ltd, Bergen Associates Pvt Ltd, Bergen Systems, etc.

NP Krishnan, director, marketing, Consul Consolidated Pvt Ltd, one of the exhibitors at the show this year, says that the response to the show was very poor this year, and the overall mood at the expo was also low. The number of visitors was drastically less than last year. He feels the overall poor performance of the solar industry is to be blamed for this. “The government is not doing much to fund the solar projects. No hand holding is being done for the small and medium enterprises. This is because the Ministry of New and Renewable Energy (MNRE) is short of funds, and it has stopped giving subsidies to new projects. I think the uncertainties surrounding the government policies are the main reason for a negative sentiment in the solar industry, which got reflected at SOLARCON 2013,” he adds.

However, EMMVEE Photovoltaic Power Pvt Ltd, which has been participating in the event ever since its inception in 2009, agrees with SEMI that since there are so many regional solar shows happening in India, and in south India in particular. “This is the main reason for SOLARCON India 2013 failing to attract good number of exhibitors and visitors,” says Biju PC, manager sales, EMMVEE Photovoltaic Power Pvt Ltd. “Earlier, SOLARCON India used to be one of the biggest solar shows in India, however, the rising competition from other shows has resulted in dismal performance of SOLARCON India this year. Now every state is coming up with its solar policy and promoting the solar industry in different regions by conducting such shows,” he adds.