PTC India Limited, a power trading company, on Thursday signed Memorandums of Agreement (MoAs) with discoms of six states for the sale of 1,000 megawatt wind power under the Ministry of New and Renewable Energys (MNRE) first wind auction scheme. 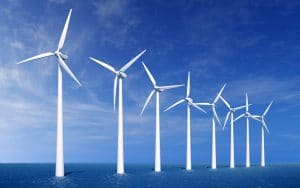 The agreements with discoms of Uttar Pradesh, Bihar, Jharkhand, Delhi, Odisha and Assam were signed during a two-day conference of ministers of power, new and renewable energy and mines of different states and union territories.

According to c, a government statement said that as per the MoAs, discoms of UP will buy 449.9 MW, Bihar 200 MW, Jharkhand 200 MW, Delhi 100 MW, Assam 50 MW and Odisha 50 MW of wind power for meeting their non-solar renewable purchase obligation (RPO).

The Letter of Award (LoA) to the successful wind power developers under the first wind auction scheme have been issued by the Solar Energy Corporation of India (SECI) on April 5 and the projects are to be commissioned within 18 months from the date of issue of LoA.

This was the first time an auction was done in the country for wind power through e-reverse auction and a record low tariffs of Rs 3.46 per kWh was obtained.

On Thursday, MNRE also launched a scheme for next round of wind auction for 1,000-MW capacity wind power projects which will be open to any entities with non-solar RPO.

On June 14, with the objective to encourage competitiveness through scaling up of project sizes, the MNRE had sanctioned a scheme to set up 1,000-MW inter-state transmission system connected wind power project.

Under this scheme, PTC India Ltd. was selected by the SECI to sign the power purchase agreements with wind projects and power sales agreements with buying entities. The term of PPA and PSA will be 25 years.