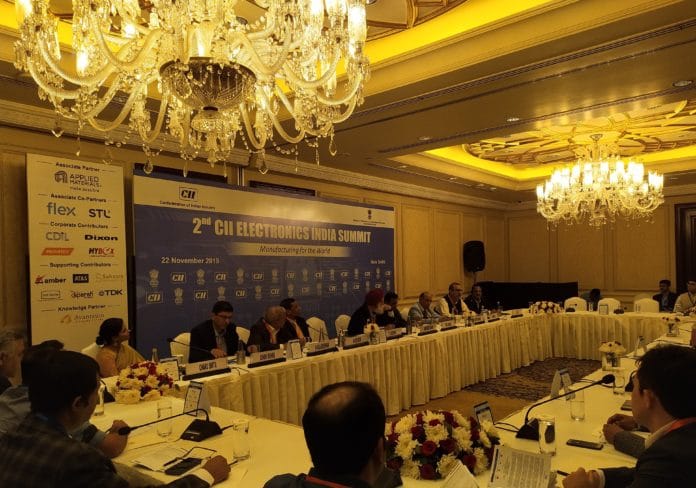 India aims to be a $400 billion industry by 2025. To depict the current scenario of the Indian electronics component industry in terms of production as well as demand generation, ELCINA has come up with a new study. The study highlights that demand for electronic components in India is about $32 billion, out of which the manufactured amount is almost $10 billion. The remaining $22 billion is carefully split between the  import of components and import of PCB assemblies.

Reaching even 40 per cent of the original target, i.e., $100 billion seems difficult at the moment. Advising to aim a more realistic target following practical plans, ELCINA secretary general Rajoo Goel is of the opinion that component manufacturing in India should aim to grow by at least 25 – 30 per cent to reach a nominal margin of $40 billion by 2025.

$100 billion by 2025 – What will it take?
India is predominantly at the lower end of the market, industry veterans worry. They say that we are primarily witnessing only “assemble in India” at the moment. This makes the journey to the destination of achieving $400 billion more difficult.

Amrit Manwani, managing director of Sahasra Electronics shares that setting a target of $100 billion dollars would require an investment of about $150 billion, which is close to a fairy tale if tried to be achieved exclusively by domestic players. To help set this plan into motion, foreign players need to pitch in. Supporting his statement, Manwani states that the last fiscal year has witnessed a demand of $120 billion from the component industry, out of which only $10 – 11 billion were met by the Indian players. The rest was mitigated through imports, either in the form of finished goods or in the form of components alone, which has made it unsustainable for the industry.

To achieve a nominal growth of  25 per cent of the originally set target would require the component industry in India jump from $10 billion to $100 billion by 2025, which is a humongous target according to many industry stalwarts. The skepticism increases further as such a jump in growth has not been witnessed in the last 30 years of reforms undertaken by the Indian electronics industry.

To co-relate with the figures further, N Balakrishnan, managing director of TDK India Pvt Ltd stated that while currently 90 per cent of mobiles sold in India is being manufactured locally, only a negligible percentage of components is actially being manufactured here. The time period taken to develop a component manufacturing base in India will be quite long. This is more so because a steady growth of 30 – 40 per cent cannot be generated from the low and mid segments of the electronics industry alone. Stepping into the hi-tech fields like Internet of Things, artificial intelligence, 5G, autonomous driving etc  is very crucial at the moment. But at the same time, the question is whether India is even ready to undertake that transitional journey.

MSMEs – The real pain point of the ecosystem
Though a lot has been done at the policy level, the ground reality still remains unimpressive when it comes to the MSME sector. Despite forming the major chunk of the Indian backbone, time and again the industry has shared their concern regarding lack of sufficient government support towards this section of revenue generator.

Industry veterans are of the opinion that to help the MSMEs grow it is necessary to extend schemes like M-SIPS to them, but in a much simplified manner. Alternatively, the government should look at some credit-guarantee scheme for the benefit of this sector. The insurance sector also needs to buckle up to ensure the MSMEs receive timely payments which currently poses to be a major challenge.

Adding to these is the lack of ease of doing business for MSMEs, for it takes a time period of 7-8 months for a MSME to get electricity connection which forms the most essential requirement for any kind of manufacturing.

Call for action
Industry’s call for adequate tax cut and subsidies have seem to go unheard for the past couple of years, mainly due to the constraints brought in by ITA-1. Industry veterans, while dealing with their pain points, came up with some possible solutions which can remove the dark clouds that is currently hindering the growth of component manufacturing in India. Some of them include:

MeitY puts up a positive picture
On the contrary, S K Marwaha, senior director of MeitY shows optimism and faith in the government’s initiatives. He stated that considering the existing challenges, in the last 4 years, the compound annual growth rate of electronics production in the country has been around 45 per cent, showcasing the success of various government initiatives like NPE, PMP etc.

The government announced earlier this week that they will be providing incentives to promote domestic component manufacturing. The aim is to reduce the import bills and improve export volumes. Marwaha states that out of the forecasted $400 billion target, going forward, exports will contribute around $150 billion.

ELCINA’s recently set up electronics component task force plans to come up with a report by the end of this month. If at the organisational level such steps can be taken, half the battle will be won.