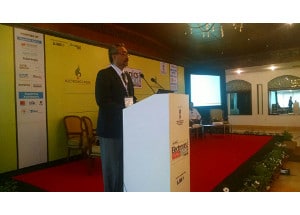 April 17, 2015: NTL Electronics India claims to be the largest manufacturer in India in the field of  electronics-based lighting products. The company believes that a strong supply chain management system keeps it ahead in every aspect. Speaking at the Vendor Development Seminar at EFY Expo 2015, Sarabjit Singh,general manager, NTL Electronics India Ltd highlighted the core of efficient supply chain systems

NTL is the largest B2B company in terms of manufacturing in India. NTL manufactures around 20 million CFL ballasts, CFLs per annum. With a competent R&D system, NTL has effectively braced the Chinese competition and give an import substitute to the country. In 2012, NTL tied up with Netherlands-based Lemnis to produce full range of LED lamps with the brand name ‘Pharoax’. The future, as we all know, belongs to LED.

Lighting Industry in India stood close to Rs 135 billion in 2013 and it has a potential to reach Rs 300 billion by 2020. The opportunity in this sector is huge. This is the time to start manufacturing in India. Another big change that has happened in the past 2-3 years is the shift of global manufacturing hub from China to India. This is primarily taking place due to three reasons – firstly, the labour wage rate in china is increasing rapidly, and the manufacturers there, at present, are facing a tough time. The reliability on Indian manufacturers has grown over a period of time. Manufacturers here have better opportunities now to serve the global markets.  The government of course, is now very keen to support local manufacturing in the country. However, merely saying that the government is keen to support domestic manufacturing will not turn the table around. As an industry we need to support the government fully. As a buyer we have to support the Indian manufacturers and stop manufacturing from China. NTL is making sincere efforts in this direction.

With the rising energy costs and promotional schemes by the government, and the consumer awareness, the LEDs are getting a faster adaptation in India. The Indian market, currently, is flooded with EESL tenders, a government body organising tenders for LED bulbs and street lights. In the last five months NTL secured four tenders. The government also plans to convert 28 million-30 million streetlights to LED street lights. The future looks very bright and promising. In the year 2009, NTL was the first company to supply close to five million LED bulbs to IKEA, the largest retailer in the world. As of now  the company is in the process of completing the delivery of 2.2 million bulbs for EESL. NTL has the capacity to produce one million LED bulbs per month.  According to a Frost & Sullivan report on ESDM, the Indian lighting market generated a revenue of close to US $170 million in 2012 and this is expected to touch US $414 million.

The consumers want cheaper products A customer knows that he has to buy LED but what LED he has to buy is not clear. A lot of awareness in this direction is required.

NTL is fortunate that it is able to source PCBs in India and are fed 100 per cent by Indian manufacturers. For the active components, the company buys diodes transistors, MOSFETs, ICs, and the LEDs.

Around 70 per cent of the raw material that goes in lighting is imported. The component market in India is at a very niche stage, and the country hardly has any company to support the electronic components market. Everything is being imported from China as of now. There is a huge potential in the electronics components markets and now with the support of the government’s new incentives and policies, this goal can be easily realised.

The firm buys close to 330 million pieces of electrolytic capacitors and sources millions of units for other components. The volume is expected to grow up as the company expands manufacturing. Apart from the PCBs, everything is being imported. Very small quantity of the total raw materials is coming from India. However, the local SMEs offer quite a good support in sourcing copper wire. 100 per cent of copper wire that NTL uses is sourced from within India, which is close to 30 tonnes a month. The plastic sheets are also source from India, and as stated, the rest other materials come from China.

NTL has plans to localise purely and the company intends to convert 25 per cent of our supply chain in to localisation in the next two years. NTL has identified some suppliers and has already started working in this path. It is very important for manufacturing units setting up in India that the capacities give advantage of costs by having economies of scale so that the product cost is optimised.

Vendor development: Win-win situation for both

At NTL we consider all our suppliers as our supply chain partners. The suppliers are the backbone of any company. The basic intent is to create a win-win situation where both, the supplier and the buyer, gain from each other. NTL also has a dedicated supplier development cell to develop and groom all the potential suppliers to meet the organisational needs, and to ensure uninterrupted supply chain requirements. The basic criteria that the company looks for supply chain partners are– technical capabilities, adequate spare production capacity to meet the needs, financial capabilities to execute the orders in time, and quality management system, which means a company must have all the relevant certifications. Cost effectiveness is another important criterion. Being the largest buyer, NTL intends to buy the best products.

CFLs took at least ten years to reach optimum pricing. However, in LEDs in the situation is just reverse. In just about three-five months the prices have changed drastically. A 7W LED bulb costing about Rs 240 around five months back is costing Rs 104 at present. These are the dynamics on which the industry is working now. The suppliers must tune themselves to the new market conditions.

Technology is the key driver for innovation. A product created in the past had the potential to survive for three to five years. However now the product life cycle is very short-lived. The entire technology is about setting a product in a miniature form. NTL has a team to assist and guide domestic and foreign investors on how to set up a manufacturing unit in India. In the coming five years we might see manufacturers from China setting up a manufacturing base in India. With the inevitable growth in the electronics industry, given the conducive economic and political environment, this is the most appropriate time to set up operations in India.