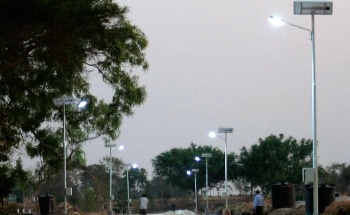 With awareness about green energy and energy savings, applications of LED lighting products are increasing, pushing down prices. This is also posing a challenge to manufacturers, as they now need to meet the demand for low cost products

This growth will also be driven by trends like decline in LED prices, government investments in energy efficient lighting systems, quick returns on investment (ROI), and technological innovations to keep prices low for a price sensitive country like India. Let’s take a closer look at some of these trends.

Prices of LED lighting systems have fallen by 30 per cent in the last two to three years due to improvements in technology. “Mass adoption of this energy efficient light source will lead to a further fall in prices, which will make these products more affordable for the commercial and residential segments,” says Vikas Sikand, CEO, LED lighting, Romarsh Elcomponics Technologies Pvt Ltd, which has recently entered into a partnership with Japanese company Koha to manufacture and sell its products in India.

“Every player in the LED lighting industry is, therefore, making an effort to create a commercially feasible LED lamp, and the race to achieve this is dotted with innovations,” explains Gopal Shukla, country manager, Semileds.

Shares Ravi AV, general manager, Nichia Corporation India, “When Nichia entered the Indian market about eight years back, we were delivering 40 lumens for $ 2, and now we offer 550-600 lumens at $ 1. With the price of LEDs declining drastically every year, we expect a further fall of 15-20 per cent in 2013, and hence demand will rise drastically.”

According to Giri Prasad GV, country manager, Everlight India, given the fact that India is a power starved country, switching to LEDs will save a huge amount of energy. Therefore, the LED industry is under tremendous pressure to reduce the prices. “LED prices have always been on a downward trend and with the growing need and awareness about this energy efficient resource, the prices will fall further,” he says.

Shift towards low and mid-power LEDs

While high power LEDs offer unique features like higher junction temperature, increased luminous outputs, and are in demand mainly for outdoor applications, small and medium sized LED manufacturers are gradually migrating to low and mid power LEDs. This is because high power LED technology has still not matured, and only a few big players who have excellent technical knowhow are making good quality high power LEDs. Explains Giri Prasad, “Small LED manufacturers from China do not use good technology to make high power LEDs because of the increasing pressure to reduce the price of the end product. Therefore, they tend to use cheaper LEDs, which don’t have good specifications or a long life and, hence, fail to generate more sales. This has made them concentrate more on mid and low power LEDs.”

Also, high power LEDs demand a high quality heat sink, which requires advanced knowhow related to materials like aluminium, and costs increase in proportion to the size of the heat sink used. However, in mid and low power LEDs, these issues do not arise. Therefore, manufacturers prefer these to high power LEDs.

Sharing the same view, Ravi AV says, “Since most of the companies are trying to improve the lumen per dollar ratio so that the product becomes commercially viable, they are going for low and mid power LEDs. However, for industrial lighting, only high power LEDs can be used.”

For applications like street and industrial lighting that require only high power LEDs, the buyers are generally big private and public sector players for whom price isn’t the main criteria if they get good quality product with a better return on investment (ROI). Besides, with high power LEDs, energy savings are higher. As Sanjeev Rawat, vice president, sales and marketing (Europe and APAC), GreenStar R&D India Pvt Ltd, puts it, “The outdoor high power LED market is growing because of government initiatives to save energy, and by switching to LED lighting for streets and outdoor industrial applications, 60-80 per cent of energy can be saved easily.”

Growing demand for downlighters and streetlights

In India, the demand for LED lighting products comes mainly from institutions and government departments—mainly for downlighters and streetlights. A report by Frost and Sullivan notes that street lighting and outdoor lighting applications provide a plethora of opportunities for LED lighting due to quicker returns on investment (ROI). In outdoor applications, an ROI can be achieved in two to three years, whereas in indoor applications, the ROI takes four to five years.

Informs Arun Kumar, manager semiconductor division, Toshiba India Pvt Ltd, “The demand for streetlights is growing as the government is becoming conscious about saving energy. However, as households are also becoming aware of the benefits of LEDs, in the next five years we will see demand for LED lighting products picking up from this segment as well.”

Demand for signage and display picks up

The manufacturers and distributors of LED lighting products in India believe that the robust growth in the LED lighting industry will continue at an accelerated pace, because more and more people are realising the importance of green energy and energy savings. As a result, the demand for different LED applications is picking up.

One area where demand is on the rise in India is signage and display. According to Amanmeet Singh, managing director, Wililux India, which manufactures LED signages in Delhi, demand for LED indoor and outdoor displays is picking up fast in the big cities of India, and hence many firms have started manufacturing them locally. “LED display products are getting very popular and acceptable in India. The exact demand cannot be ascertained, but with the current limited market penetration, it has a very high potential. LED displays have multiple applications. They are not ‘one-size-fits-all’ products. There are many different market segments, each with very unique challenges. Hence, these are mostly customised products,” he adds.

Says Vivek Sharma, manager, marketing, Max Flex & Imaging Systems Ltd, “In the last two to three years, many major projects have come up that require LED displays and signage. For example, the DTC and BEST buses in Delhi and Mumbai are using LED indicators. There is also demand for LED displays from airports, railway stations and metro stations.”

India Semiconductor Mission: India Needs To Do Enough To Sit On...