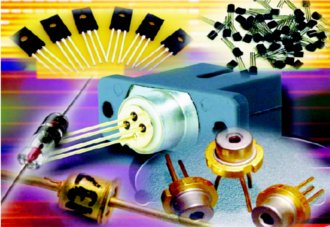 The Indian market for diodes is expected to undergo a major shift towards chip-based diodes. This has driven some of the leading players to revamp their existing facilities to cater to this emerging demand. In transistors, on the other hand, IGBTs and MOSFETs are expected to grow at a faster rate than other transistors

Friday, October 18, 2013: Though diodes and transistors currently form a small portion of the active components market in India (refer Fig 1), the importance of this market cannot be underestimated. The Indian diode market is estimated to have reached a value of US$140 million in FY 2011-12. Consumer durables (30 per cent) and lighting (25 per cent) together account for the major portion of the demand for diodes. Besides these, the growth is driven by the automotive and telecommunication sectors as well.

According to an ELCOMOS report published by ELCINA, the overall market size for diodes in India was about US$ 104 million in FY 2009-10, of which indigenous manufacturing accounted for 20 per cent. The remaining demand was met through imports from China and Taiwan. This is largely attributed to the nonavailability of the right technology for manufacturing and the competitive pricing offered by products imported from China and Taiwan.

It is estimated that there are close to 30 diode manufacturing units operating in India with more than 50 per cent of them being classified as smallscale industries.

The transistors market, on the other hand, is estimated to have grown to US$ 104 million in FY 2011-12. Growing demand in the automotive and consumer durable markets is the key factor driving the transistor industry, thus positively affecting its growth rate.

According to the ELCOMOS report, the Indian transistor market was estimated to be worth US$ 83 million in FY 2009-10 with imports accounting for 80 per cent of the total market. Transistors also are largely imported from China and Taiwan. In addition, a considerable proportion of transistors used in automotive and power electronics are imported from Europe, owing to their high quality.

The tremendous growth of the electronics industry as well as the development of newer devices has fuelled the growth of the transistors market. The Indian export of transistors was around $3 million in FY 2009-10, to meet demand from markets like South America and Africa.

It is estimated that there are more than 20 transistor manufacturing units operating in India, with 80 per cent of them being classified as small-scale industries. The industry is largely dominated by traders who import transistors from China and Taiwan. The two dominant players in the Indian market are CDIL and Bharat Electronics Limited (BEL). In addition, other companies like Semikron and Arihant manufacture IGBTs for niche industrial products.

The non-availability of raw material like moulding compounds, silicone wafers and lead frames, the high import duties on raw material and the competitive component pricing from players in China are cited as the key restraints for the transistor manufacturing industry in India.

Trends in the diodes market
With the major end-user industries focused on miniaturisation, lower power consumption, higher integration and compact packaging, the market for diodes is also expected to undergo a major shift—away from leaded diodes to chip-based diodes. This has driven some of the leading players like Continental Devices India Limited (CDIL) and Vishay Components India to revamp their existing facilities to cater to this demand. According to industry experts, this forward thinking by the Indian manufacturers would help drive the Indian diode market in the future.

Trends in the transistors market

The market share of indigenously made transistors as compared to that of imports is expected to increase as the two major manufacturers, namely, CDIL and BEL are planning to expand their facilities.

Transistors are classified based on the types of majority and minority charge carriers introduced in the silicon. The insulated gate bipolar transistors (IGBTs) and metal-oxide field-effect transistors (MOSFETs) markets are expected to grow at a faster rate than the other transistors due to their use in devices like power supply units and mobile handsets, respectively.

The key technology trends that are expected to drive the transistor industry in the next few years are the increasing usage of nano-transistors in IC sectors like mobile phones and computers, and the advent of lithography-free fabrication. The latter would aid in fabricating clean and high-graphene devices. This method of fabrication would help in manufacturing transistors that operate in the GHz range. This would be the key driver in RF communication in the next few years.

The article is based on major inputs from ELCINA’s ELCOMOS report and Praveen Atnoorkar, director, Operations, Vishay Semiconductor India