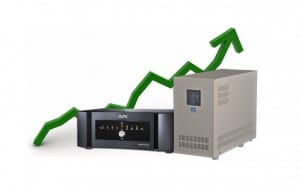 Indian power sector faces an acute shortage, which varies between an off-peak shortfall of approximately 10 per cent and a peak shortage of approximately 15 per cent. Inadequate power generation and high transmission and distribution losses are important contributors to this problem. The increasing power deficit throughout the country is one of the major factors driving the growth of the inverter industry in India, which is a highly fragmented, competitive and growing market, with the presence of several branded products and suppliers from the unorganised sector.

Tuesday, June 14, 2011: The Indian power inverter market was estimated to be approximately Rs 20,000-22,000 million in 2010-11, in terms of revenue. It has been projected that the inverter market will exhibit double digit growth rates during the next three to four years. This is likely to be the result of a steady demand from the domestic, small office home office (SOHO), small and medium enterprises (SMEs), commercial, industrial, and other sectors. The demand for inverters in India is expected to be robust, especially from rural and semi–urban areas, where the duration of power cuts and load shedding is more, compared to what urban areas experience.

Inverters are now being used in various sectors like telecom (such as in base transceiver station (BTS) cell sites), where they are gradually complementing and replacing gensets, which incur high maintenance costs

The demand for inverters in India is seasonal in nature, with sales peaking during summer when there is an increase in peak demand across the country. To cater to the needs of rural and semi-urban consumers, apart from unorganised suppliers, a few organised suppliers have also launched small, mini and nano inverters. These are in the range of 50-300 kVA and are used to light up compact fluorescent lamps (CFL), tubelights, etc, in rural and semi-urban areas. Some new entrants in the inverter market are planning to launch their products in tier II and III cities, rather than in the big metros.

The inverter industry is expected to witness many technological innovations in the coming years to cater to a larger number of applications and new categories of end users. The demand from retail showrooms and small offices is primarily for 1 kVA, 1.4 kVA and 2 kVA inverters. Demand from gas stations and petrol pumps, housing societies, automatic rescue devices used in lifts, Internet cafes, photocopier shops, etc, is for 2-5 kVA inverters. The banking, financial services and insurance (BFSI) sector, which witnessed rapid growth over the last three to four years, is a major market for inverters in the sub-5 kVA power range.

With such demand, the inverter industry is witnessing a gradual shift in technology and design to support more sophisticated appliances. The major application of inverters in the 5-30 kVA power range is prominently in industries for emergency lighting systems on the shop floor. In hotels and restaurants, clinics and hospitals, inverters are catching up as an alternative backup power solution for some non-critical applications such as emergency lighting in hotels and restaurants, various commercial applications such as escalator and elevator backup systems, and for running non-life support equipment in clinics and hospitals. In data centres and IT/ITES companies, inverters are used for supporting non-critical loads.

There are about 25 branded organised suppliers and several unorganised suppliers, who cater to the market. The top three suppliers are Microtek International Pvt Ltd, Luminous Power Technologies Pvt Ltd and Su-Kam Power Systems Ltd. The market has witnessed the entry of many branded suppliers in related product categories, such as uninterruptible power supply (UPS) systems, gensets, batteries and others, in the last few years. These include Emerson Network Pvt Ltd, Mahindra Powerol, Amara Raja, Lucas, etc. Several consumer durable companies such as Whirlpool, Videocon, Crompton Greaves, Usha, Godrej, Bajaj, BPL, etc, have also entered the market during the last few years, primarily due to the robust demand in the domestic and SOHO segments.

It is expected that a few more consumer durable suppliers may venture into the fast growing inverter market. These firms tend to outsource their production to contract manufacturers and this is giving rise to the inverter contract manufacturing industry in the country.

As new pollution control norms are likely to take effect, major suppliers of generator sets in India will have to upgrade engine designs to conform to the new emission standards. This presents a huge opportunity for the Indian power inverter industry to deliver viable complementary products and solutions for generator sets in the lower power rating category (till 30 kVA).

The existing suppliers of branded products are making significant marketing and communication efforts to create a brand pull among the consumers. The market is expected to witness intense competition in terms of price and additional benefits (extended warranty, freebies such as trolleys, etc) to attract end users.

Quality and reliable products at aggressive prices, made available through a wide distribution network, and backed by a prompt service support, are the keywords for success in the burgeoning power inverter market in India. The unorganised market is slowly shrinking, as end users are becoming conscious about the quality and reliability of the products. This is due to a reduction in the price gap between products from the organised and unorganised sector, coupled with the fact that organised suppliers are also increasing their distribution reach.

Price, after sales service and availability across the country are becoming the key differentiating factors to address the growing market demand. Despite minor challenges, market prospects will continue to remain upbeat.

The power inverter market prospects in India will continue to be bright as long as evenings are dark in many homes across the country.

Mahindra and Renesas to partner for an electric future