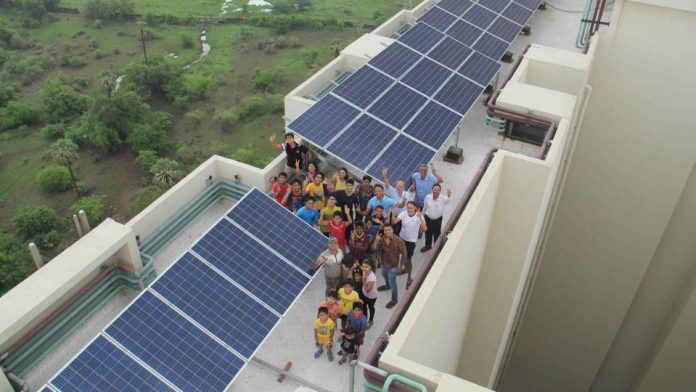 With 546 panels, the project will power lights in the common area, 12 lifts and five water pumps for 622 flats in four 20-storey towers in Building 1.

A housing society in Bhandup (West) is set to cut back its electricity expenses by 65 per cent, as it inaugurated its 180- kilowatt power (kWp) solar plant on Saturday. Dheeraj Dreams Building 1, located off LBS Marg, is one of four societies in the complex that had installed the solar panels.

Those involved in the project said this is the largest such project in the suburbs. With 546 panels, the project will power lights in the common area, 12 lifts and five water pumps for 622 flats in four 20-storey towers in Building 1.

Binu G Verghese, chairman of Building 1, who conceptualised the project said to Hindustan Times that since clean energy is the need of the hour, the residents of the complex felt it was the right time for them to do something beneficial for future generations.

He further commented that awareness about solar power led to four of the complex’s seven societies adopting such projects, with a cumulative installed capacity of 535kWp, making it one the largest residential solar projects in India.

Residents also expect reduced costs in the coming months. Shrikanth Swaminathan, resident and committee member, said that currently, they were paying an average ₹4.50 lakh per month on electricity expenses which is expected to be reduced by 65 per cent.

Navin Sethi, one of the resident informed that the cost of setting up the plant was ₹98 lakhs, which will be recovered within four years. Citizens have come together to adopt renewable energy means in a democratic manner, which sets an example for residential areas across India to go green, stated Shyam Asolekar, professor, Indian Institute of Technology-Bombay, who inaugurated the project.