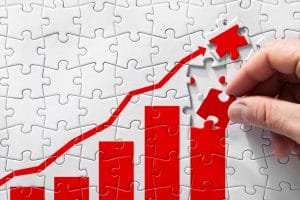 Reliance Jio Infocomm, which disrupted the sector when it started in September 2016, though, is likely to continue to outclass both its rivals, posting strong net profit and revenue growth, propelled by heavy customer addition. The price war triggered by Jio’s entry appears to be winding down, possibly signaling the return of stability in the sector.

Airtel falls behind for the first time
Jio’s entry with free voice calls and dirt-cheap data had forced operators to match tariffs to protect their user base, which hurt their revenue and earnings. Consequently, smaller telcos shut down and Vodafone India merged with Idea Cellular, reducing the field to three private operators — Jio, Airtel and VIL.

Bank of America-Merrill Lynch expects Airtel’s average revenue per user (ARPU) — a key performance metric — to jump over 21 per cent to Rs 126. According to Economic Times, brokerage BNP estimates VIL’s ARPU will increase by 19 per cent to Rs 106. Both telcos introduced their minimum recharge plans in October, aiming to weed out non-revenue generating customers and boost ARPU.

BNP expects Airtel and VIL to have each added 9-10 million mobile broadband users in the quarter. It said VIL’s data volume growth is poised to accelerate, driven by the speedy integration of networks following the merger.

The brokerages said Mukesh Ambani-led Jio will likely report its sixth successive quarterly profit as Airtel and VIL continue to make losses for their India mobile businesses. BofAML said Jio’s net profit would jump 64 per cent on-year to Rs 840 crore, boosted by the net addition of an estimated 29.5 million users.

Airtel is expected to report a net consolidated loss in the range of Rs 599 crore to Rs 1,300 crore — its first in almost 16 years — with still-low pricing, higher costs and its non-mobile businesses shrinking.

CLSA estimates Airtel’s home broadband and DTH business will “see 3 per cent on-quarter revenue declines” due to competition and a new regulatory order that allows consumers to select and pay only for channels they want to watch.

The wide variation in Airtel’s loss estimates is due to the possibility of the telco being stung by higher depreciation and finance charges, said analysts to the English Daily.