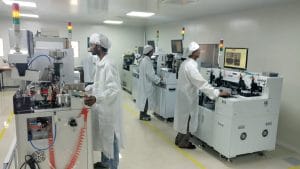 The Kwality Group is 51 years old. It came into existence as Kwality Electricals Pvt Ltd, which was established in 1966 to manufacture special lamps for the automobile, railway and electronics industries.

About the company
In 1979, the mother company, Kwality Electricals Pvt Ltd, got a licence to manufacture 100,000 LEDs per annum. But it was only in 1987, when the licence was broad banded and import duties were reduced, that a new company called Kwality Electronic Industries was set up, to manufacture filament bulbs. The company was an OEM for a majority of the automotive electronics companies in India. The unit first manufactured the through-hole LEDs and, eventually, added seven-segment displays to its portfolio. It was in 1993 that the seven-segment display manufacturing division was spun off as Kwality Photonics Pvt Ltd. The Kwality LEDs were the first approved Indian source for the Department of Telecommunications (DoT) and the Centre for Development of Telematics (C-DoT) in 1990.

Manufacturing floor at a glance
Thirty years of LED manufacturing experience has helped Kwality Photonics to successfully set up a global supply chain that ensures cost advantages in procuring high quality raw materials. The company’s raw materials are sourced from vendors in Japan, Taiwan, China and USA to ensure quality inputs. The workforce is mostly from ITIs and is trained on a continuous basis to churn out high quality products. The product specifications are constantly upgraded to keep up with fast evolving developments at the global level.

Machinery used at the facility
Kwality Photonics uses a variety of machines in the LED manufacturing process. Key equipment used in the unit are:

Recognition and awards
Some of the awards that Kwality Photonics has earned are listed below:

Best practices in manufacturing
The company strongly believes in following ISO 9001, which is an excellent compendium of best practices, when it comes to manufacturing. The ISO 9001 standards were formed out of the best manufacturing practices that evolved at companies like Motorola, GE, Toyota, etc, and these were later embellished by the best brains.
ISO 9000 addresses all the business processes, right from the supply chain and production, to quality, storage and customer acquisition/retention. The ISO 9001-2015 version further guides the company to aim for leadership, and also identify and mitigate the risks of business. K. Vijay Kumar Gupta, CEO recommends that every CEO ought to give ISO 9001 a fresh look at the earliest, and treat it as an ‘expert management system adviser’.

Logistics
Air couriers are the backbone of the logistics system at Kwality Photonics. The company’s LEDs are of high value and low weight, and for goods to reach within 15 hours, customers are prepared to pay 1 per cent added cost. The imports of Kwality Photonics and LEDchip Indus happen mostly by air cargo, and reach warehouses within 24 hours of landing in the country. 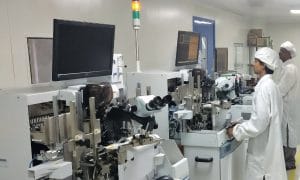 Focus on quality
The optical parameters are tested right after the gold wires are bonded and during the encapsulation and dispensing process to ensure that all LEDs are produced to the narrowest band of values. Finally, every single SMD LED produced is subjected to the measurement of brightness flux lumens, forward voltage Vf, full spectral analysis like colour-coordinates (x,y), and colour-correlated temperature (CCT). It is then automatically grouped into further narrow values and packed in reels with clear labels, so that customers can choose and use the same LEDs of identical colour and lumens in the same lot of fixtures.

The mantras of success
According to Gupta, the company was the first to start LED manufacturing in India. He says, “Thirty years ago, LEDs were not so important but we were manufacturing them.” He adds that the company’s solid understanding of material sciences has been the key to its success, and that Kwality Photonics has been successful in continuously adopting new technological improvements, from time to time.
Gupta says, “We became famous for offering high-end LED products. So when the Chinese were selling red LEDs, we were into ultra-bright red LEDs.” He adds that Kwality Photonics’ LEDs were preferred for LED display walls because the company was able to ensure that it provided the requisite uniformity in brightness, even when 200,000 LEDs were used for a display.
Another key reason behind the firm’s success, according to Gupta, is that it has always used the most pre-tested and pre-sorted chips for manufacturing its LEDs. “I’m blessed with motivated workers. The resulting productive work culture has helped immensely in maintaining blemish-free quality over 30 years,” he says.

The journey so far
Kwality Photonics has put India on the global LED map by setting up an ultra-modern fully-automatic LED plant with a capacity of a billion LEDs per year. The company has high brand equity in the domestic market, one reason being that it is led by noted scientists, engineers and experts in the LED domain.
The new company set up this year—LEDchip Indus Pvt Ltd—is a DIPP recognised startup enterprise and is financed by SIDBI at Hyderabad. The company has planned for an investment outlay of ` 2 billion and signed an MOU with the Telangana state government for this purpose. It plans to continuously add more capacity in the next two quarters to reach a capacity of 30 billion within two years of operations.

Take on ‘Make in India’
The LED industry has been the growth engine for the electronics industry globally since the 2008 downturn – right up till now. According to company sources, the Indian policy makers have not recognised the value of the rapid developments happening in the LED sector. MeitY, DIPP (Department of Industrial Policy and Promotion) and MoP (Ministry of Power) should quickly act to make the LED sector a growth engine in the ESDM sector and set up Make-in-India missions. In the last one year, the business opportunities for LED components, like LED packages, crossed a value of ₹ 1 trillion (60 million LED bulbs), which was sufficient to feed five to 10 LED plants. The demand next year could be 10 times this volume, sources at KPPL opine.

Take on GST
The KPPL management feels that LED components can be classified in the 5 per cent tax category for electronics, with regard to GST. The tax revenue buoyancy is assured, with the predicted CAGR for LEDs being 100 per cent. The LED industry has to be identified as one of the priority sectors in India. The highest level of incentives should be given to LED wafer and chip manufacturers. Gupta suggests that existing players in Taiwan (Epistar, Genesis, Epileds and Nextar, which are facing the heat from China’s low cost producers) and China (Sanan, ETi, etc) should be invited to set up LED wafer manufacturing units in India.