The USA-based semiconductor association, in its latest report, has noted that the CoronaVirus is driving the rise in global fab equipment spending. China accounts for most of the new projects 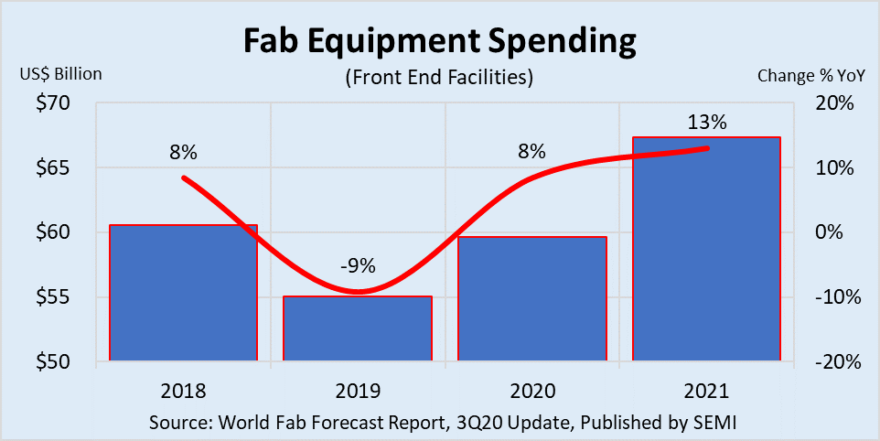 Soaring pandemic-inspired demand for chips that power everything from communications and IT infrastructures to personal computing, gaming and healthcare electronics will drive an eight per cent increase in global fab equipment spending in 2020 and a 13 per cent increase in 2021, SEMI announced in its World Fab Forecast report.

“Rising demand for semiconductors for datacenter infrastructures and server storage along with the buildup of safety stock as U.S.-China trade tensions intensify are also contributing to this year’s growth,” read the report.

Recovering from a nine per cent decline

The bullish trend for overall fab equipment investments, as per SEMI, comes as the semiconductor industry recovers from a nine per cent decline in fab spending in 2019 and navigates a roller-coaster 2020 with actual and projected spending drops in the first and third quarters mixed with second- and fourth-quarter increases.

“Of all chip sectors, memory will see the largest spending increase in 2020, growing US$3.7 billion, or 16 per cent year-over-year (YoY), to US$26.4 billion, and tack on an 18 per cent increase to reach US$31.2 billion in 2021. 3D NAND spending will log the largest percentage surge this year, expanding 39 per cent, and register modest growth of seven per cent in 2021. DRAM is expected to see four per cent growth after a slowdown in the second half of 2020 before jumping 39 per cent percent next year,” read the report.

China accounts for the most (nine) of the new projects; followed by Taiwan at five; Southeast Asia and the Americas at two each; and Japan, Korea, and Europe/Mideast at one each. The report also tracks 18 new construction projects planned to begin next year – 10 in China, four in the Americas, three in Taiwan, and one in Europe/Mideast.