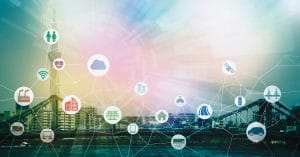 The phenomenon of getting smart devices to communicate with each other over the Internet, without human intervention, has led to the much-hyped term, the Internet of Things (IoT). While a lot is expected from this evolving technology, we take a close look at the opportunities and constraints in India.

In the last couple of years, rather than exports and manufacturing, India’s growth story has been more dependent on the services industry, on domestic consumption, and the rise of small and medium enterprises as well as startups.
Considering these trends and the strong push from the government for ‘Digital India’, the market for emerging technologies like Internet of Thing (IoT) related components, products and solutions is bound to grow significantly.
This, in turn, may represent a significant growth opportunity for organisations offering the related components, products and solutions.
Senior executives from such organisations were surveyed recently as part of our monthly industry poll. In this article, we take the pulse of the IoT market in India.

Methodology
For the survey, 10 senior professionals involved in the Indian IoT industry ecosystem were randomly selected to share their inputs. This sample is a microcosmic representation of India’s IoT industry. Survey participants were requested to share their insights on the following:
1. The anticipated growth of the Indian IoT industry in FY 2017-18
2. Expected growth per cent
3. The major demand generating applications
4. Customer categorisation
5. Hindrances that impact the growth of this sector
6. Technology trends in this sector
The responses obtained from the interviews were then collated and analysed.

Growing market
The global IoT market will exceed US$ 300 billion by 2020. According to a NASSCOM study, the Indian IoT market is poised to reach US$ 15 billion by that year, accounting for 5 per cent of the global market (Figure 1).
India’s IoT market is expected to grow exponentially over the next couple of years. According to 6Wresearch, the Indian IoT market is projected to grow at a CAGR of 28.2 per cent during 2016-22. The key drivers of this market are government initiatives, growing acceptance of smart applications, and increasing Internet penetration across the country.
The Indian government has launched various projects (such as the ‘100 smart cities’ project) and is encouraging organisations to implement IoT.  The smart cities project is expected to play a vital role in the overall growth of the market. The World Bank and the Asian Development Bank (ADB) are expected to provide loans of US$ 500 million and US$ 1 billion, respectively, to India for this project. Amongst all the IoT applications, industrial applications account for the maximum revenue share in the Indian market owing to their growing usage in energy management, smart buildings, manufacturing, and the environment.
In sync with the above mentioned projections, all executives we interviewed stated that the IoT business across the country will see positive growth in the financial year 2017-18. However, there are mixed opinions about the percentage of expected growth. Sixty-seven per cent of the respondents expected 20 to 30 per cent year-on-year growth (Figure 2).

Growth drivers
At present, the growth of the IoT business is primarily driven by consumers shifting from using devices such as laptops and tablets to using smart sensors, wearables and clustered systems like fitness trackers or smart homes. However, with the goal of improving human productivity, safety and the overall quality of life through a network of smart connected devices, the potential of IoT technology lies far beyond just consumer electronics. It shows promise in other markets and application areas including energy, water and traffic management, industrial IoT, surveillance and security, etc.
The high growth in this market is anticipated on account of ongoing developments in IoT technology, which provide better connectivity and coverage as well as real-time monitoring/tracking of services and systems across diverse industry verticals to reduce operational and manpower costs. Apart from smart cities, various other government projects such as smart transportation, smart grids, etc, are also expected to propel the adoption of IoT technology across the country. Therefore, the initial smart product-oriented applications in white goods, cars, etc, will be extended to improve supply chain agility, manufacturing and operations efficiency, etc.
Survey participants anticipate the maximum growth in IoT business from the following sectors (Figure 3):

Organisations in industries such as consumer durables, automotive, electricity supply, manufacturing, logistics and retail, that can effectively harness and exploit the data generated by the IoT, will enjoy a significant competitive advantage.

In a market survey that Electronics Bazaar conducted last year, we found that around half the survey participants believed that smart services like business intelligence (BI) and analytics would account for a major share of the market. However, this year, survey participants gave almost equal importance to BI and analytics, professional services, and connectivity and communication services (Figure 4), with respect to their share of the overall revenue pie. This trend may result in additional opportunities for the electronics industry.
According to 33 per cent of the survey participants, value creation will also stem from the hardware, software, services and integration activities provided by the technology companies that enable the Internet of Things (Figure 4). Device connectivity is the fundamental aspect of any IoT application. So the sheer volume of deployment will generate a huge demand for the communication hardware, devices and also services. And this is where electronics plays a role.
Each of the IoT devices will require, at the minimum, a microcontroller to add intelligence to the device, one or more sensors to allow for data collection, one or more chips for connectivity and data transmission, and a memory component. The connected devices that transmit information across the relevant networks rely on innovations from semiconductor players—highly integrated microchip designs, for instance, and very low-power functions in certain applications. The semiconductor companies that can effectively deliver these and other innovations to original equipment manufacturers, original device manufacturers, and others that are building Internet of Things products and applications, will play an important role in the development of the market. That market, in turn, may represent a significant growth opportunity for semiconductor players and their customers.

Technology trends
The wide adoption of the IoT may need customised technology solutions that are suitable for the country. According to the survey participants, low-power wide area network (LPWAN) technologies like LoRa have an excellent fit in the Indian context of smart cities and smart agriculture. Sigfox, NB-IoT, etc, are also gaining importance for the same reasons.
A new class of System-on-Chip (SoC) based devices, with optimal power and connectivity features as well as with sensor integration, will be in demand. The first generation of such chips is already on its way, although it will probably be a few generations before chips can deliver all the functionality required. Wireless integrated circuits can enable self-powered sensor nodes, which are easy to deploy without the need for power or signal wiring.
Additionally, a new array of sensors based on micro electromechanical systems (MEMS) technology is rapidly being developed to enable IoT applications beyond motion and image sensing, to include those that measure humidity, altitude, food calorie composition, and various human health indicators. This is a result of the increasing variety of consumer IoT applications such as wearable and clustered systems.
With connectivity being a key capability required in IoT applications, multiple communications standards and protocols are being supported by consumer electronics and industrial devices, like low power and personal area wireless mesh networks, which are primarily suited for sensors. IoT applications usually require a single chip in an acceptable form factor and low power consumption for battery-operated devices. This requirement is a factor for growth in SoCs with embedded cores, GPUs and integrated wireless connectivity in a single package. Progress in these technologies has allowed the development of IoT devices such as sensors that have compute, storage and network capabilities built into extremely small form factors, yet with low energy requirements.
On the services front, one emerging requirement will be asynchronous data transmission by the device. This will lower the cost of the device and the entire infrastructure. This will also need security in order to prevent tampering with the data transmitted by the device. And a reduction in the ISO-OSI stack will help; working closer to the PHY layer will be better suited in terms of cost, power, carbon dioxide emissions, etc.

The hindrances
Like any other innovative concept, the growth of IoT also depends on several factors. We asked the survey participants to suggest the possible challenges that could derail the growth of the IoT sector in the country. Here is a collation of their opinions:

However, the hope is that these problems are not insurmountable, particularly if the electronics industry players are willing to take an active role in solving them.