The decline can be attributed to higher pent-up demand last year due to COVID-19, said the firm

Aggravated by the escalating components shortages, smartphone shipments in India witnessed a 2 per cent year-on-year (YoY) decline to reach over 52 million units in 2021’s third quarter, according to a recent report by Counterpoint Research.

The decline can be attributed to higher pent-up demand last year due to COVID-19, said the firm.

Commenting on the market dynamics, Senior Research Analyst Prachir Singh said, “Smartphone shipments maintained a strong momentum after the second COVID-19 wave. The consumer demand outweighed the supply due to the high pent-up demand. Keeping in mind the global component shortage, most of the brands were aggressively working to secure enough stock for the festive season. The demand in the online channels remained strong and reached highest-ever shipments in Q3 2021.” 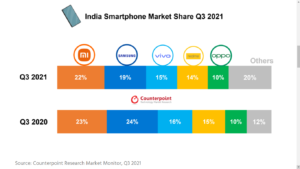 Xiaomi retained the top position in India’s smartphone market with a 22 per cent share driven by the Redmi 9 series and Redmi Note 10 series.

Samsung remained the second-largest smartphone brand in India with its shipments registering a 19 percent share. The brand captured the second position in the 5G segment, driven by the Galaxy M42, M52, A22 and A52s models.

vivo held the third position in Q3 2021 with a 15 per cent share. It became the top 5G smartphone brand for the first time in Q3 2021, while remaining the top offline smartphone player as well.

Apple was the highest growing brand in Q3 2021 with 212 per cent YoY growth and led the premium smartphone market with a 44 per cent share. The brand maintained its leading position in the ultra-premium segment with a 74 per cent share.

OnePlus grew 55 per cent YoY in Q3 2021 driven by the OnePlus Nord Series. The brand captured the second spot in the premium segment.