Apple led the smartphone market revenue, capturing around 37 percent of the market

However, the market declined 6 percent year-on-year due to the ongoing global component shortages and slow recovery of key markets such as China and parts of Europe. 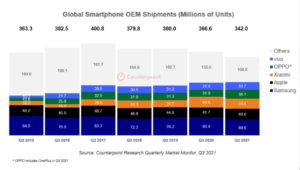 Xiaomi shipped 44.4 million units in Q3 2021, down 5 percent YoY and 15 percent QoQ as it was severely hit by the ongoing component shortages. As a result, its global market share declined to 12.9 percent from 16.25 percent in Q2 2021. In China, Xiaomi’s shipment declined 15 percent QoQ and the brand lost the third spot to HONOR.

OPPO and its sub-brands grew 23 per cent YoY to capture 11.1 per cent market share with 38.1 million units. In India, OnePlus grew 55 per cent YoY in Q3 2021 driven by the OnePlus Nord Series.

vivo grew 9 per cent YoY and 4 percent QoQ to take 9.8 percent share for the quarter. vivo continued to lead in China’s market in Q3 2021 with more than 17 million units. The brand also continued to expand its presence in markets such as LATAM and Europe.

Research Analyst Aman Chaudhary said, “The top 5 brands could have performed better if not for the component shortages, but they still managed to navigate the crisis through their efficient supply chain management.”

On the other hand, Huawei’s shipments further declined 84 percent YoY to reach 5.8 million units due to a lack of core components. With no change in the US sanctions against Huawei, the brand is expected to continue its decline.

realme achieved its highest-ever shipment performance with 16 million units in Q3 2021. The brand continued to expand its presence in new markets such as LATAM and Europe. The record quarter is coming at a time when component shortages were at their peak.