According to the report, the average cost of a rooftop solar system increased by 17% in Q1 2022 compared to the same period last year

India added 456 MW of rooftop solar capacity in the first quarter of 2022, a 34% year-over-year growth compared to 341 MW registered in the same period last year, as per a report by Mercom India Research.

In a quarter-over-quarter (QoQ) comparison, installations were up by 13%, compared to the 402 MW installed in Q4 2021. The installation numbers were the second-highest in any quarter after Q2 2021.

In Q1 2022, rooftop solar accounted for 15% of the total solar installations. At the end of Q1, India’s cumulative rooftop solar capacity was approximately 7.6 GW. During the quarter, 47% of the installations were in the industrial segment, followed by 29%, 22%, and 2% in commercial, residential, and government segments. 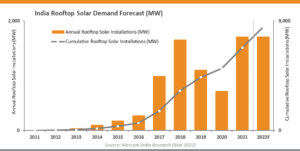 According to the report, the average cost of a rooftop solar system increased by 17% in Q1 2022 compared to the same period last year.

In Q1 2022, around 71% of the rooftop solar installations were under the capital expenditure (CAPEX) model, while the operating expenditure (OPEX) or renewable energy service company (RESCO) model represented the rest. Overall project margins have reduced due to the rise in component prices, the advent of basic customs duty (BCD), and the hike in goods and services tax (GST).

The top 10 states accounted for nearly 73% of cumulative rooftop solar installations at the end of Q1 2022. Gujarat is the top state for cumulative solar rooftop installations, while Maharashtra and Rajasthan rank second and third.