I always want my workplace to be one in which I can see the smiling faces of my colleagues: V.P. Mahendru 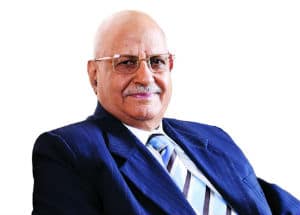 May 19, 2015: From spending his childhood in Pakistan, facing the hard times of Partition to making some unique contributions to the electronics industry, V.P. Mahendru, chairman and managing director, Eon Electric Ltd, has come a long way. In a conversation with Samonway Duttagupta of Electronics Bazaar, he shares the story of his life

Schooling at Multan and Lahore in Pakistan

College: BSc in science and mathematics from Hansraj College, New Delhi, graduated in 1947

These are a few of my favourite things

Good to Great: Why Some Companies Make The Leap… And Others Don’t by Jim Collins

I was born in a small place known as Abdul Hakim in Multan district of what later became Pakistan. I still cherish the memories of playing with my friends in the lush green farms. Nights used to be pleasant with a gentle breeze, and I enjoyed playing gulli danda under the moonlit sky.

My father worked for the Indian Railways (then under the British) for 40 years and retired as the station master of Lodhran railway station in 1944. I was the youngest of my siblings, with a wide age difference of 20 years between my eldest brother and me. This age difference prevented me from spending time with my siblings because as I was growing up, they moved on to different places for higher studies.

During the time of the Partition in 1947, my father’s friend, Gulam Rasool, was kind enough to give us shelter in a dark and hidden room in his house for a few days till the situation improved. We had to leave everything behind, including our house. A week later, we left Pakistan under the protection of Rasool’s loyal employees, who escorted us to the Lahore Cantonment railway station at night. We took a train carrying refugees into India. Even though we faced some trouble from hooligans on the way, thanks to the presence of a few army men, we reached India safely.

I am always keen on getting more tangible work processed, planned and implemented in a day’s time. This is because if innovative thoughts can be converted into strategic action plans and then implemented, productivity increases.

I always want my workplace to be one in which I can see the smiling faces of my colleagues. This gives me utmost joy and satisfaction. After all, they have similar values in life and, hence, I enjoy being with them.

The budding entrepreneurs of this generation are fortunate enough to be exposed to a plethora of options within very short periods of time. But they must understand that beyond anything else, they should have complete devotion towards their work and stick to some good values in life. Being sincere in their business and aiming to serve customers honestly can take them to the top.

Major contributions to the industry

My commitment towards work has allowed me to introduce a number of new things to the industry, including the first Indian standards specifications for switch fuses in India, the first rewirable switches in India and the first MCB with 9kA breaking capacity, among others.

Apart from core electronics, one of my major achievements has been the development of insulated fishplates made out of ordinary wood, which replaced the steel fishplates used to join the railway tracks that run electromotive trains, which was a first in India.

The Partition of India was a turning point in my life as most of the established norms in business operations and human relations changed. The intensive loss of manpower in Germany and Japan at that time after WW2, compelled them to adopt new ways of running businesses with a lean management at all levels. We took it as an example and learnt from them, hence triggering a lot of changes in our way of achieving higher productivity and higher efficiency—of men and materials.

People who played a major role in my success

I attribute my success in life to two teachers whose lessons have helped me a lot in life. One of them was at the primary school in Lahore, who advised me that if I stayed true to my principles in life, I would be successful. The other teacher was the professor of mathematics at Hansraj College, who taught me that there are no shortcuts in life.

According to me, success is the achievement of an objective which is not only related to your personal goals but also relates to the success of everyone around you—colleagues, family, community and the public at large—anyone who has in some way or the other helped you in reaching your current position.

- Advertisement -
Previous article
Smart inverters to drive solar installations in India
Next article
We believe that selling a battery actually amounts to selling a service and not a commodity: B&B Battery

Union Budget 2023: What Is In Store For The Electronics Industry?

My Dream Is To See India As A Top Electronics Product...