Sridhar Gadhi, Founder & Executive Chairman, USA-based Quantela, Winner of ‘Technology Pioneer 2019’ award, World Economic Forum said that smart city development is a trillion-dollar opportunity and is estimated to be US$ 1.3 trillion in market size by 2025.

Sharing his experience and his journey into delivering social impact and being profitable at the same time, he said that though cities occupied just 2% of the surface area of the world they house nearly 50% of the world population. And 2.5 billion people are expected to move to urban areas by 2050.  Cities create 18% of the economy of our country.  Cities are responsible for 75% of the greenhouse gases emission, he said. But cities contribute 80% of the global GDP, he added.

Addressing a gathering of academic, researches, industry experts, and students at day 2 of the 3-day Global Impact Summit at Woxsen University, at Kamkole in Munipally Mand near Sangareddy, Sridhar Gadhi recalled how businesses sniggered at him when he said that he is working for city improvement. People used to complain of working with the Government, he said. Quantela is into automating and optimising urban infrastructure operations. He said that the Government is not in the business of making money but in the business of providing services to make the life of the citizens easier. 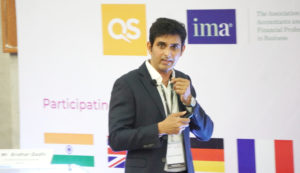 Speaking about how his company Quantela has pioneered the ‘Outcome-Based-Service-Model’, he mentioned “At Quantela it is all about making technology that has a meaningful outcome, that is impactful to the society, environment and the economy.” Citing his company’s focus on Smart Cities, which no longerjust a concept, he added “Smart City Development is a Trillion Dollar market  with an estimated YoY of 23% and a huge opportunity to explore. It is an industry where every dollar and every minute that you invest will make a huge impact on the society.”

He also threw light on how today it is not the countries that are competing against each other but cities, he said citing the recent online tussle between Hyderabad and Bangalore. It is important that cities grow economically to provide services to citizens. “Quantela provides Traffic & Safety digital infrastructure solutions to the UAE with records 95% accuracy and City Solution to the US, both these solutions are a Self-Sustainable, putting no burden on the government or the society. Governments can come up with such self-sustainable models and provide huge impact to society.” Sridhar said.

Answering a question on the role of universities Shridhar said, “Many universities are starting incubators and accelerators. Major funds and innovation are coming out of universities in US. Most innovation comes from universities and defence sector. Universities play a huge role but much more integration with corporates and collaborative approach is required, he opined. Giving advice to students he asked them to rethink, refocus and re-strategize every once in a while.”

Speaking at the roundtable discussion on ‘Emerging Technologies & The Future of Business’, Mr. Shiv Mehta, Author of Protocols of Money & Alumnus, NYU Stern School of Business, USA said that “ The biggest innovation that blockchain will bring about is the building a social contract i.e. Digital Money. Many countries will legalise it soon. For instance the crisis in Sri Lanka today where it is dependent on IMF. So I strongly feel that blockchain technology is not only important for businesses but also for the economy of a country.”

Mr. Badita Florin, Founder, Corruption Kills, Romania who was a panellist in the discussion addressed how the transformation of Job Markets. “Emerging technology will bring about a lot of transformation, it is infact disrupting many sectors and by 2030 top jobs will be impacted by emerging technologies.” He further added that “In the last 2 to 3 years we have created more data than we have in the last 50 years. The need of the hour is to have more Data Scientists. I think India can be the front runner and leverage the field of Computer Science to build the talent pool.”

‘2030: The Way Forward for Internationalisation in Higher Education’ the 2nd Round Table discussion of the day witnessed Mr. Nishit Jain, Sr. Spl. Advisor, Asia EFMD speaking on the need for internationalisation and that competition is no longer local, so you have to have a global mindset. It helps to recognise each other, know each other and other’s cultures.

Ms. Tanya Bajaj, Director of Client Relations, ETS India emphasised “ Universities must be able to give a standardised space, where all the student can compete and measure their skills on a global level.”

Mr. Rohan Shah, Founder & CEO, Classavo, USA added “Internationalisation is the need of the hour for students to connect to global educators and Universities cannot ignore that anymore.”

“Collaboration between countries on a global scale is not possible without Digitalization, it is important for developing counties to have advanced digital technology.” said Ms. Jennifer Hossain, Asst. Director, Centre for International Affairs & Cooperation, UIU Bangladesh;

Rohde & Schwarz Participates in 6G-ANNA, A Lighthouse Project to Advance 6G in Germany