India’s neckband market shipments declined 13% YoY in Q1 2022 but grew 34% YoY in 2021, according to the latest research from Counterpoint’s IoT Service. The market showed tremendous growth in 2021 primarily due to the user preference for neckbands over headphones for their stylish look, wireless design and long-duration usage. Consumers are also opting for neckbands as an alternative audio device. The decline in Q1 2022 is primarily due to the high inventory which was pushed into the channel in Q4 2021 ahead of the festive season.

Commenting on the competition, Senior Research Analyst Anshika Jain said, “Half of the total neckband market was taken over by the top three brands in Q1 2022. boAt captured the first position due to its significant presence in the lower price segment (INR 1,000-INR 2,000). The primary factor that has helped boAt to maintain its leadership position is its wide range of products in hearables, along with strong marketing efforts. OnePlus and realme captured the second and third positions with 14.9% and 9.6% market shares, respectively. 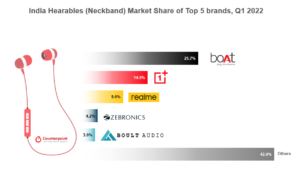 Talking about the overall market, Jain said, “The popularity of neckband devices is increasing as users are upgrading from a wired ecosystem and also want an alternative hearable device. Like TWS, the India neckband market is dominated by local players, which captured around 58% share in Q1 2022. These players have focused on providing the emerging features at affordable prices, like voice assistance, gaming mode for low latency, gesture music controls and insta-charge technology. Besides, next-gen neckbands from top brands are coming up with increased total playback time, primarily focusing on the budget segment (INR 1,000-INR 2,000).”

Looking at the forecast, Research Director Tarun Pathak said, “India’s neckband market holds tremendous potential. We estimate that this market will continue to grow in double digits in the coming period. We have also seen the entry of new players in this segment, which is expected to drive volumes in the second half of 2022. Domestic manufacturing is also likely to pick up due to the increase in the customs duty for wireless hearable products. The current penetration of domestically made products stands at 5%.”

According to a recent consumer study by Counterpoint, 15% of TWS users prefer to plan for other forms of wireless earphones, like neckbands, as their next purchase. India’s neckband market is approximately 1.3x of its TWS market. Going forward, competition can be expected between the neckband and TWS segments as some users are preferring neckbands because of convenience during workouts. However, we will continue to see more innovation happening in the TWS category.