TAIPEI/KUNSHAN, China — Luxshare Precision Industry is building a massive manufacturing complex in eastern China as it aims — with Apple’s blessing — to break the decadelong hold that Taiwanese rivals Foxconn and Pegatron have on iPhone assembly.

Luxshare, China’s most prominent player in the Apple supply chain, is building a 285,000 sq. meter manufacturing park in Kunshan, Jiangsu Province, with a total investment of 11 billion yuan ($1.72 billion). The sprawling site — covering an area the size of 40 football fields — will churn out millions of iPhones as early as next year.

The sheer scale of the project is a sign not only of Luxshare’s ambitions, but also of Apple’s growing reliance on Chinese suppliers, a trend that could reshape the global tech supply chain in the long run. Wingtech, another rising Chinese tech manufacturing powerhouse, recently entered Apple’s supply chain and won orders to make the Mac mini and Apple TV, multiple sources familiar with the matter said. Apple also added BOE Technology to its list of premium display suppliers for new iPhones this year. In addition to the new complex, Luxshare has also leased and remodeled an adjacent facility that was previously owned by iPad assembler Compal Electronics, according to company filings and government environmental assessment papers seen by Nikkei Asia. Luxshare is set to complete the first phase of its new complex around the middle of 2022, according to the construction floor plan and government documents obtained by Nikkei Asia. 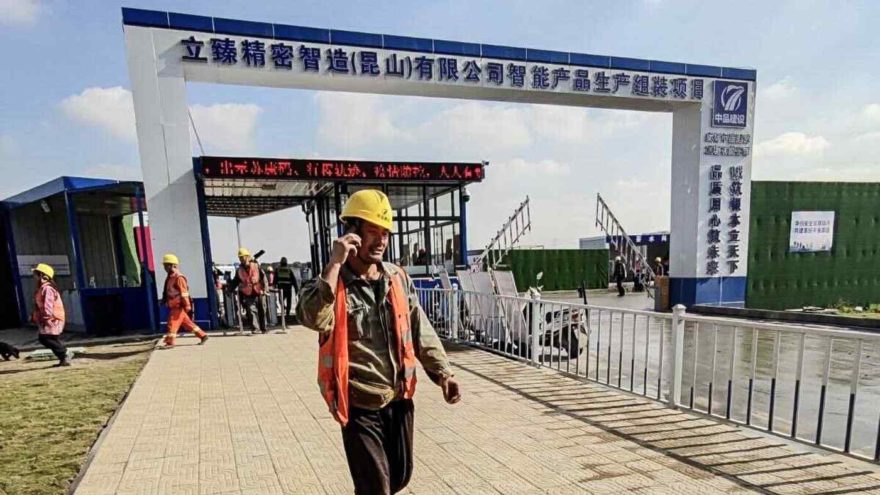 Armed with the new facility, the Chinese supplier aims to significantly increase its share of iPhone assembly, from about 6.5 million units in 2021 to between 12 million and 15 million units by as early as next year, people briefed on the matter told Nikkei Asia. Luxshare currently builds iPhones in another facility in Kunshan that it bought from Taiwan’s Wistron in the summer of 2020. Apple ships around 200 million iPhones a year, with Foxconn assembling nearly 60% of those and Pegatron around 30%.

“I went on a business trip nearby and saw Luxshare’s new manufacturing complex. I am shocked by the scale of the complex and the possible capacity it could build for iPhones,” an Apple supplier executive told Nikkei Asia. “The day it threatens Foxconn and Pegatron might arrive earlier than people’s estimate judging from the progress of the new facility.”

An executive at another Apple supplier said that although this has been the first year for Luxshare to officially build new iPhones on its own, the company’s assembly performance rate is improving faster than expected and industry peers should not underestimate it. Luxshare and the Kunshan City Government held a groundbreaking ceremony in late October. Now, a steady stream of cranes and excavators move in and out of the construction site throughout the day. Thousands of workers have been brought in to speed up construction, several on-site workers told Nikkei Asia.

Another worker told Nikkei Asia they know this is a facility for smartphone manufacturing and said they have been asked to complete phase one around April next year.

The total investment for the project has reached 11 billion yuan, including leasing and remodeling the old Compal facility, and it could generate sales of more than 100 billion yuan, according to government announcements and documents. It will eventually have a total of 39 production lines. The Kunshan City Government said it took three days to approve the record-breaking high-tech investment and grant four important licenses, including the construction license, adding that the schedule for construction has been pushed forward by two months from the original plan.

Grace Wang, founder and chairwoman of Luxshare, said in a public speech in late October that it was thanks to the Kunshan government that construction could start so quickly. “It’s hard to imagine that the four key licenses can be approved in such a short period of time if we had not personally experienced and witnessed it ourselves.”

Luxshare, which shoulders Beijing’s hopes for building a homegrown contract electronics giant like Foxconn, is the fastest-growing tech manufacturer among Apple suppliers in terms of product portfolio. It has gone from being a small supplier of connectors in Apple’s supply chain back in 2011 to the most important China-based components supplier and assembler for the AirPods earphone series, Apple Watch and iPhone. The Chinese tech champion has already expanded its manufacturing footprints to India and Vietnam, where it helps Apple make components and assemble AirPods, and has even ventured into semiconductor assembly to help Apple package and test chips used in its wireless earphones.

Jeff Pu, a veteran tech analyst with Haitong Securities, told Nikkei Asia that Chinese tech manufacturers such as Luxshare and Wingtech have long served domestic smartphone makers such as Xiaomi, Oppo and Vivo and now need to expand their market share and seek new growth opportunities, including by targeting the Apple supply chain.

“Many Chinese manufacturers, including Luxshare, not only could offer lower prices but also are highly flexible and could offer agile adjustments to meet Apple’s requests, which is what [Apple CEO] Tim Cook values highly. … They are among the earliest to build manufacturing plants in Southeast Asia to help Apple diversify production to avoid U.S. tariffs,” said Pu, referring to tariffs slapped on Chinese goods under former President Donald Trump. “Not to mention they definitely have good government support when it comes to building new plants in China.”

Foxconn is still the undisputed leader in terms of manufacturing capability and operation management, and is always Apple’s key partner for new products, Pu said, but Chinese manufacturers like Luxshare are already reaching a level — in terms of technology and financial performance — that could directly compete with other smaller suppliers like Pegatron and Wistron.

Apple declined to comment for this article. Luxshare and Wingtech did not respond to Nikkei Asia’s request for comment.