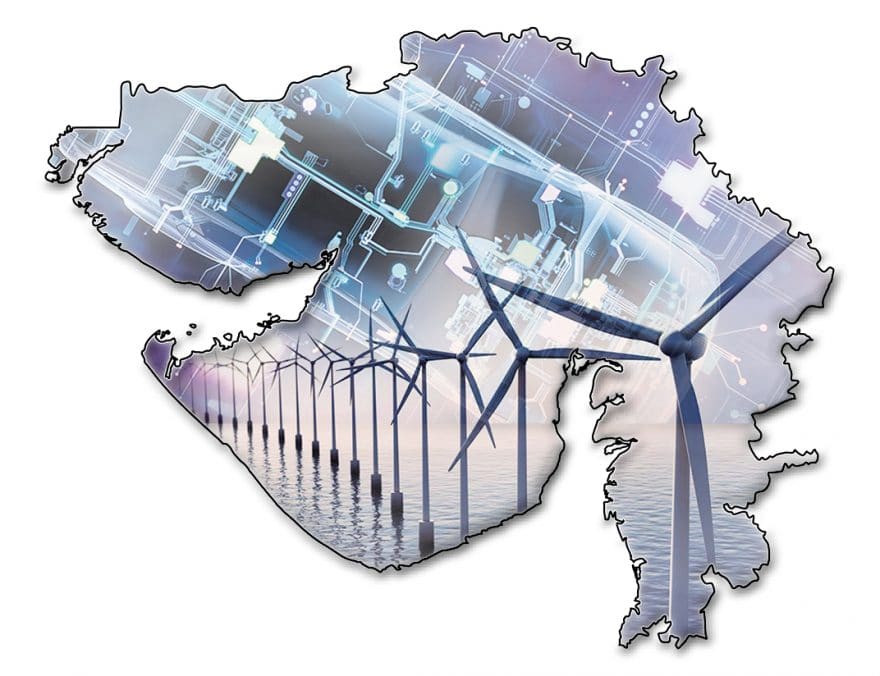 Gujarat tops the list of the fastest growing and developing states in the country, with Ahmedabad being on the Forbes’ list of the top three fastest growing cities in the world. Gujarat is also the third largest state economy in India. All this makes the state a land of industrial and business opportunities.

Located in western India, Gujarat is bordered by Rajasthan to the northeast, Madhya Pradesh to the east, Daman and Diu to the south, Maharashtra to the southeast, and the Arabian Sea and the Pakistani province of Sindh to the west. The state is spread across an area of 196,024sqkm and is considered the third largest state economy in India with a GDP of US$ 220 billion. Gujarat is the ninth most populated state in India, and 64 per cent of its population is in the working age group of 15-59 years. Gandhinagar is the state’s capital and Ahmedabad its largest city and economic hub. Gujarat has emerged as an important economic and industrial hub in India.

Gujarat is an industrially advanced state with cement and petrol being its largest output. The world’s largest ship-breaking yards are also situated in Gujarat near Bhavnagar at Alang. Nearly 100 per cent of the 18,000 villages in Gujarat have access to 24-hour electricity (to households) and eight hours of power to farms. The state’s 900,000 computer users are connected to broadband Internet and it has had the highest decadal agricultural growth rate of 10.97 per cent. The Economist has also referred to Gujarat as India’s Guangdong.

The transportation facilities of Gujarat are worth appreciating. It has 17 airports, two being international —Sardar Vallabhbhai Patel International Airport at Ahmedabad and Surat International Airport. Gujarat comes under the Western Railway Zone of the Indian Railways, with Vadodara Railway Station being the busiest in the state and the fourth busiest in India. Gujarat has good sea links with the country’s longest coastline of 1600km. Regarding road connectivity, the Gujarat State Road Transportation Corporation (GSRTC) is the primary body that provides bus transport within the state as well as to other states across India. Gujarat constantly supports and promotes the use of bicycles to reduce pollution.

Business-friendly options
There is a reason why Gujarat is favoured by investors and industrialists. It is well connected to domestic and international markets as it is located on the west coast of India, and linked to major ports of UK, the Middle East, Africa, East Asia, and Australia.

Gujarat is India’s largest producer of cotton, salt, marine products, castor, pharmaceuticals, chemicals and petrochemicals. It is also the world’s largest centre for polished diamonds, giving it a unique place in the gem and jewellery industry.

Gujarat is among the top five FDI destinations in India, and the state government is adopting various reform measures to enhance its business and investment environment. It is a state that promotes growth, sustainable development and skilled employment. The state government expects the manufacturing sector’s share in Gujarat’s GDP to rise from 28 per cent to 32 per cent by 2020.

The credit for Gujarat’s popularity on the business front also goes to the business-friendly industrial policies, which ensure that high quality socio-economic development takes place. Incentives under the Special Economic Zone (SEZ), Special Investment Region (SIR) and Industrial Area Development are specifically designed to promote growth in the business sector. Gujarat is also the state with the lowest losses due to labour strikes.

Schemes and policies
Gujarat has always been known as one of the leading industrial states. To maintain this reputation, the state government has introduced many enabling policies and schemes. Let’s look at some of them.

Incentives to industries: A scheme has been introduced with the objective of creating a healthy and profitable environment for businesses and to further increase the industrial development of the state. This scheme focuses on the ‘Make in India’ programme—Gujarat leads the country in 21 out of the 25 sectors identified under this programme. Through this policy, Gujarat aims to:

The objectives that Gujarat is focusing on for the growth of the electronics manufacturing sector are:

E-governance policy
With the help of information and communication technologies (ICT), Gujarat has been providing smart governance to its citizens and businesses. The e-governance policy of Gujarat is focused on building a transparent, inclusive and connected government. The state has set up core ICT infrastructure like the State Data Centre (SDC), the Gujarat State Wide Area Network (GSWAN) and eGRAM, for this purpose. Areas where Gujarat is giving special attention to institutionalise ‘Digital Gujarat’ are:

Startup policy
The Gujarat government believes in investing in science, technology, innovation and entrepreneurship in order to economically and socially uplift the state. Its startup policy aims to sharpen the entrepreneurial skills of the youth and create a scientific and technological ecosystem. The government is focusing on making Gujarat a major startup zone, and to achieve this goal it is also providing some incentives to the incubators and startups. The key objectives of this policy are:

Information technology (IT) policy
The IT sector has helped India in creating value in both the economic and employment fronts. IT in India has opened doors for foreign business relationships with almost all the reputed companies. Realising the importance of IT, Gujarat has also come up with its own IT policy to address the current challenges in the field of agriculture, education, healthcare, telecommunication, energy, rural development, etc. The objectives that Gujarat is working on are:

Aerospace and defence policy
To expand its industrial capabilities, Gujarat is working towards increasing its share of the aerospace and defence (A&D) manufacturing sector. As Gujarat is known for its expertise in engineering products, it is well placed to take advantage of the surge in investments in the Indian A&D industry.

Green energy initiatives
Gujarat has rich renewable energy sources. It has 300 days of sunshine, good winds along its 1600 km long shoreline, and scope for energy plantations in its vast wastelands.

There are many initiatives and policies implemented by Gujarat in the green energy sector so that it can achieve its goal of generating 198,500 MU of energy by 2020. Some of these initiatives are listed here.

Solar power policy: Gujarat’s solar power policy was launched to increase the share of solar energy in its energy usage. This policy is to facilitate the large scale addition of solar power generation capacities in the state while taking into account the interest of all its stakeholders, such as investors, developers, technology providers, grid operators and consumers in a sustainable manner. The core objectives of this policy are to:

Small hydel policy: Gujarat has plenty of water sources like rivers, canals and streams, which can be used for clean and renewable hydro power generation. The state aims to construct small hydel projects without causing any damage to the environment. It plans to do that by promoting, supporting and facilitating investments in these projects. The main objectives of the state government are to:

Solar-wind hybrid power policy: The Gujarat government has launched this first-of-its-kind policy in India to promote the simultaneous production of solar and wind power in the state. The developers of such projects can get benefits for a period of 25 years or through the life of the project, whichever is shorter.

The main objective of this policy is land optimisation. A developer can use barren land for setting up solar or wind power projects, irrespective of its major use, and transmission lines can also be used for both the purposes. Other than this, no power duty will be charged for the electricity produced from the projects. There is also a provision of 50 per cent exemption from electricity duty, in case the developer sells power to a third party. These hybrid projects will also benefit from an exemption of cross subsidies, additional surcharge, and 50 per cent relief in wheeling charges.

Solar parks: The Gujarat Solar Park is located at Charanka village in Patan district. It is spread across 5,384 acres of land and has a capacity of 600MW. It is recognised as one of the projects contributing to the highest carbon emission reductions (CER) in the renewable energy sector as it accounts for 342,400 tons of CER. This park has provided permanent employment to more than 1,000 people.

Another upcoming milestone is the setting up of the country’s largest single-location ultra mega solar park in Gujarat. The first tender for the 1GW solar capacity is all set to be issued. The Dholera Special Investment Region (DSIR) is proposed to house a 5GW solar park. This park will be spread across an area of 11,000 hectares and will cost around ₹ 250 billion.

The future
The government of Gujarat is constantly focusing on creating a world class state, where there are plenty of investment opportunities.

In its 2018-19 budget, the government has earmarked ₹ 125 billion for urban development. Gujarat has six smart cities that it expects to compete with the cities of the world, for which the state is planning to set aside ₹ 30 billion.

Gujarat is aiming to grow in the renewable energy sector too. It is set to launch various projects in this field, and has recently given the contract to develop two wind power projects of 500MW to the Suzlon Group in Kutch district. Another solar PV project worth ₹ 1.25 billion has been given to Bharat Heavy Electricals Ltd (BHEL). This will be set up at the Gujarat Solar Park in Charanka. The Gujarat government is taking up solar projects that have a capacity of more than 500MW.