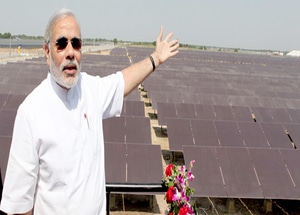 Thursday, December 25, 2014: According to the recent reports, India will receive an estimated investment of around Rs 20,00,000 million within next two years in the solar sector. A study reveals that over 0.5 million people will rely upon this sector to earn their livelihood. The New and Renewable Energy Ministry has taken several steps under the leadership of PM Narendra Modi to improve the usage of the solar energy.

The ministry has developed the guidelines to set up solar power projects in a way that could
spur the companies to set up the projects in the rural areas, thereby helping the countryside to develop. While the earlier governments had just set the target of 2,000 MW addition of solar power within the next five years. Unlike them, Modi government has set the foundation of developing 0.1 million MW solar power in the country.

Within last few days the government had adopted several new measures to promote the usage of solar energy in the country. It has announced setting up of 25 solar parks, nod for setting up the plants on the vacant land of Defence Ministry, connecting the solar power with the national grid and has also drafted a national policy for Non-traditional Energy. Besides this, the establishment of 25 solar parks in 22 states will also help India to generate additional 20,000 MW of solar energy within next four years. All these measures if adapted well, will help India to develop as one of major solar power producing country in the world. These projects would be implemented in collaboration with the state government and by now 7 states have given approval for the solar set up.