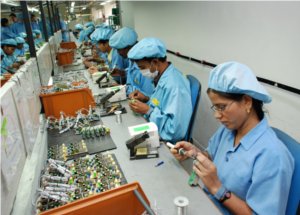 DeitY has realised that it may not be possible to focus on a large number of products, but it can promote the manufacture of 25 important products and four key components. It also wants 2014 to be declared as the year of ‘Made in India’ products

After a slowing down of activities in the latter part of 2013, with respect to the government’s support to the electronics industry, DeitY seems to have learnt a lesson regarding the shortcomings of its activities and has decided to be more focused. This year, it will focus on promoting domestic manufacture of 25 high-priority electronic products that account for around 82 per cent of the electronics consumed in India, as well as four key components that have high manufacturing potential in India.

“It may not be possible to focus on 1000 products, but we can very well promote manufacture of these 25 products and four key components,” said Dr Ajay Kumar, joint secretary, Department of Electronics and IT (DeitY).

J Satyanarayana, secretary, DeitY, said, “2014 should be the Year of ‘made in India’ Products. It makes commercial and economic sense to manufacture these 25 products and four key components in India. If we can focus on these 25 products, then there should be a substantial change in the electronics industry by December 2014.” After putting in place policies such as the National Policy on Electronics last year, it is now time to put this in place at the ground level so that India could become a hub for the manufacture of electronic items, he added.

IESA conducted one of these reports with Frost & Sullivan and the other with Ernst & Young. While the IESA-Frost & Sullivan report analyses the growth and opportunities in the Indian ESDM market, the Disability Identification Study with Ernst & Young examines key macro issues that are impairing the growth of electronics manufacturing in the country.

“The policies announced for the sector so far were broad. These reports will help us in understanding priority segments and streamline efforts to promote domestic manufacture of these products. We can also streamline tariffs for just these products, which is difficult if we do it for 1000 products,” Dr Ajay Kumar said.

“From last year’s activities, we have realised what the various challenges are. Now we know how to address these issues. So, this year, we will focus on these 25 products and four components, and will also look into promoting the export of these products. The revised PMA is also more focused and we will develop clusters focused on these 25 products now,” Dr Ajay Kumar said. Besides domestic companies, investment proposals have also come from Japanese, American, Korean and German companies, he said. “Companies in verticals like automotive electronics, LEDs, and consumer electronics like televisions, tablets, etc, are indicating an interest in manufacturing these products,” he added.

Dr Ajay Kumar shared that the government is in the advance stages of finalising the Electronics Development Fund (EDF). Under the National Policy on Electronics, the government had proposed setting up a Rs 100,000 million (Rs 10,000 crore) EDF to help in addressing the finance issues plaguing the industry.

J Satyanarayana laid emphasis on enhancing the percentage of IP in the BoM of these 25 products. “We need to bring in some shifts in our thinking. The shift should be from component design to product design; from being importers and assemblers, we need to change to product manufacturers,” he added.

The ESDM industry in India is expected to grow at a CAGR of 9.9 per cent to reach US$ 94.2 billion by 2015. This is more than twice the growth rate of the global ESDM market and presents immense potential for the domestic market. Currently, 65 per cent of demand for electronic products is met by imports into the country, and even the balance 35 per cent that is manufactured in India is mainly ‘low value added manufacturing’.