Fact.MR’s study reveals that leading FOG manufacturing companies are adopting shrewd strategies to increase their share in the market 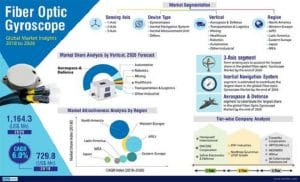 The result of Fact.MR’s assessment and 8-year outlook on the fiber optics gyroscope market also revealed optimistic growth prospects with 1.6x growth during 2018-2026.

The study further estimated the market account for revenue in excess of US$ 1,000 Mn by the end of 2026.

Fact.MR’s study found that these leading fiber optic gyroscope manufacturing companies are adopting shrewd strategies to increase their share in the market.

Honeywell International, Inc. continues to seek bolt-on acquisitions for the organization’s sustainable growth and has recently announced heavy investments in the U.S. market through M&A.

Procurement of big ticket contracts is the strategy adopted by EMCORE Corporation. The company has recently announced two contracts of worth $4 Mn and $18 Mn for inertial navigation systems and high-performance FOGS, respectively.

Northrop Grumman Litef GmbH, a tier 2 company has made significant investments in past half a decade to strengthen its R&D activities. With a stronghold in the U.S. market, the company is engaged in business expansion by improving economic and political ties with other countries.

The study noted that Fiber optic gyroscopes (FOG) have prominently replaced the traditional ring laser gyroscopes (RLG) in recent past. While the transmission continues, increasing adoption of microelectromechanical system (MEMS) gyroscopes is likely to hamper the overall sales of fiber optic gyroscope during the forecast period, it said.

North America to dominate the market

According to Fact.MR’s valuation, North America will continue to dominate the fiber optic gyroscope market and report a healthy CAGR of 5.6% during the forecast period.

Multipronged factors such as significant investments in defense, considerable demand for remotely operated vehicles and exponential growth of the aerospace industry are expected to generate revenues worth US$ 407 Mn by 2028 end.

APEJ and Western Europe are expected to follow suit and collectively account for over two-fifth of the total market share. The dynamic growth of the aerospace sector and increasing investments in the military defense will continue to underpin the increasing demand for fiber optic gyroscopes in these regions.

Demand for inertial navigation systems remains high in the aerospace sector where these gyroscope systems are finding increasing application in remotely piloted aircraft systems or drones. Apart from their defense application, drones have witnessed rapid commercialization and have now become a prime factor of digital transformation.

Fact.MR study estimates that FOG based on inertial navigation system (INS) devices will grow at a 6.5% CAGR through 2026. Inertial measurement units are estimated to closely follow the trail albeit with US$ 150 Mn lower revenue than INS by 2026.

Also 3-Axis fiber optic gyroscopes will continue to witness leading demand and account for almost half of the total market share by 2026.