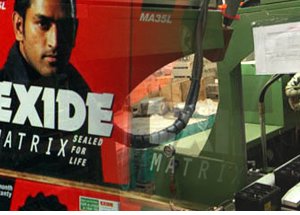 Friday, October 25, 2013: Battery maker, Exide is seething under the subdued demand for both automobile and industrial batteries, which has taken a toll on its revenue and profits.

The company has reported a dip of 1.30 per cent in net profit for the second quarter that ended on 30 September at Rs 1186.3 million in comparison to Rs 1202 million in the year-ago period.

According to P K Kataky, Exide managing director and CEO, the depreciation of the rupee and continued sluggish demand had impacted the performance of the company in the second quarter. Demand for both automobile batteries, especially OEM, and industrial batteries, including infrastructure, telecom and inverter, remained subdued.

The board of directors have reportedly declared an interim dividend of 110 per cent for the current fiscal.