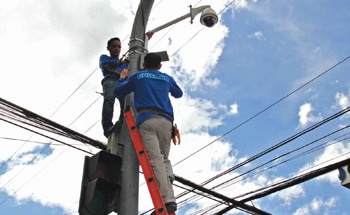 Despite the several benefits of battery-powered CCTV cameras, demand for these devices is yet to pick up in India due to their high pricing. Currently, these systems are offered as standalone solutions, with the batteries being mostly imported from China, Taiwan, Korea and Japan

By EB Bureau
Monday, April 07, 2014:You can now run your CCTV cameras and digital video recorders (DVR) on batteries, and can install them in any location with ease. Live streaming of images or capturing images even during power cuts is the USP of these battery-powered cameras. And if the camera is a wireless model, instant mobility becomes its scoring point.

Battery-powered security cameras are generally used for personal and corporate security, and in areas that cannot be monitored all the time. Their main advantage is that they operate through power outages. As long as the batteries are regularly recharged and maintained properly, the cameras will go on working. Besides, these devices are usually wireless; hence, they can be hidden anywhere. Covert or wireless CCTV systems can be run on batteries. “All digital video security cameras require some sort of electrical power supply. But by operating these with batteries, the need for power supply and wiring can be eliminated,” informs Manas Padhye, head, R&D and tech support, Zicom Electronic Security Systems Ltd, a pioneer in the field of electronic security in India. “If a CCTV camera is wireless, one can save on the transmission cable that connects it to the processor and even a DVR,” he adds.

Usually, the standard stationary security camera requires 9V to 12V DC power to operate. Pan-Tilt-Zoom (PTZ) cameras require even higher power to operate. So a battery-powered CCTV camera can save on this power.

Also, using a battery-powered camera helps in optimum utilisation of power. A camera requires 12V DC, whereas the UPS gives 220V power. However, it steps down to 12V to supply the right amount of power to the camera, hence leading to wastage.

Most camera manufacturers offer both analogue and IP cameras with batteries. However, what limits wider adoption of these cameras is their high price. “These types of cameras are not very pocket-friendly for either the consumers or manufacturers,” says Sanjeev Sehgal, managing director, Samriddhi Automations Pvt Ltd (Sparsh). “The operational costs of these cameras are too high. Various factors, like the design of the camera and battery usage, need to be taken into account while manufacturing these cameras. Also, companies that already have a power backup system installed will hesitate to opt for such cameras as these are an additional cost for them,” he adds.

How these systems work

A battery-powered CCTV camera uses battery packs that can usually operate the camera for about eight hours, after which they need to be recharged. Depending on the type of the camera and the battery, this time period may vary. For example, a wireless security camera on a battery pack will operate just for two-and-a-half hours. However, keeping the requirements of consumers in mind, manufacturers are beginning to design these batteries to run for 24 hours. Such batteries will also require a longer time to be recharged, and the prices will vary, depending on the time of operation and the features of the battery packs.

Informs Sujeet Diwedi, senior sales executive, Accord Communications, “These cameras require no electrical outlets to supply power and can run for as long as the battery charge remains. One can network multiple cameras on a single system, ranging from 4 or 8 to 16 channels. A 12 Ah battery-powered camera can run for a minimum of six hours; similarly, a 16 Ah battery can run for eight-nine hours, and a 26 Ah battery can survive for 12 hours subject to how it is used and the number of cameras it supports.”

Battery-powered wireless security cameras make use of technology similar to CCTVs. They are specific cameras that have a transmitter and receiver, which record the video images. They can send the images via radio frequency to the receiver, which is connected to a time lapse recorder or some other type of recording device.

High resolution video images are recorded on a small SD card whenever motion is detected. The system usually includes a camera, rechargeable batteries, a battery recharger, and an SD card.

The security cameras are self-contained and are easy to operate. The camera’s internal human body thermal detector can detect human body heat within the range of 15-feet from the camera and supplies power to the camera. It cuts off power five minutes after the body heat cannot be detected. The images that are captured on the SD card can be taken out from the hidden compartment and put into a computer or laptop card reader for viewing.

Types of batteries for CCTV cameras

There are basically three types of rechargeable batteries that are used in CCTV cameras—nickel cadmium or Ni-Cads, nickel metal hydride or NiMHs, and lithium ion or Li-ions. The oldest and the cheapest type is the Ni-Cad. However, if a Ni-Cad is not fully discharged before recharging, the battery will produce the actual voltage for only the time of the last usage before recharge. This can be a hassle, period and if the recharging is not done properly, can even damage the battery.

Although the features of these battery-powered cameras make them an instant hit in the market, their high price is restricting a growth in demand. Zicom Electronic Security Systems has not launched battery-powered cameras in the market but they offer such products on customised basis. Accord Communications, an end-to-end solutions provider for telecom networks, and power transmission and distribution, offers complete solutions with battery-powered CCTV cameras. In India, the majority of the battery-powered CCTV cameras are imported from China, Taiwan, Korea and Japan. And with their features becoming more and more advanced, the market has started recognising the usefulness of these cameras, says Sujeet Diwedi.

However, in comparison to the benefits of these cameras, their demand in India seems negligible. There is no mass manufacturing happening here. “No domestic player manufactures a standalone battery-powered camera. These cameras are only available as a customised solution. Also, end users have an option of using the kind of security cameras they want—the one which opeartes on power supply or which runs on battery backup; hence, they do not opt for such an expensive set up,” says Sanjeev Sehgal.