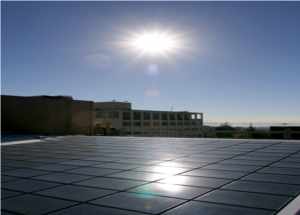 Friday, May 18, 2013: The Andhra Pradesh government is trying to entice residents to use solar power by offering them monetary benefits. The government is all set to purchase solar power from domestic users by paying Rs 3.50 per unit, who generate more power than they can consume through solar units installed at their residences.

The state is already facing a major power crisis and the government is planning to introduce a policy that would allow individual consumers to sell surplus solar power generated in their domestic plants to the state power grid.

The cabinet sub-committee led by finance minister, Anam Ramnarayan Reddy has almost finalised the rate at which excess power generated would be purchased. “It would be around Rs 3.50 per unit. We will submit a report to chief minister Kiran Kumar Reddy in a week’s time,” a member of the sub-committee said.

The recent power shortage has encouraged many people to bring down their dependency from the state power grid. However, the cost of installing a solar system that can run most of the domestic appliances such as lights, fans, televisions and computers looks expensive for an average middle class household. The price quoted by solar power generation system developers lie somewhere between Rs 1.6 lakh and Rs 1.8 lakh for a 1 KW (kilowatt) domestic rooftop solar power system. But, here the state government subsidies can surely help.

“We are hopeful of the prices becoming more affordable as the Centre has already promised 30 per cent subsidy on 1 KW system and the state government is willing to chip in with another 20 per cent subsidy. Thus, in effect, the total subsidy would be 50 per cent,” said government sources.

After state government starts providing 50 per cent subsidy, a major upward leap is expected in terms of solar power usage by domestic consumer.