Home Headlines How Leds Are Being Used In The Health Sector 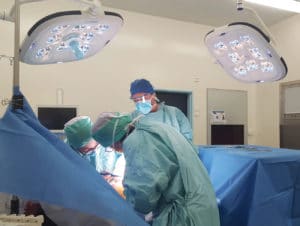 LEDs have proven their versatility in the healthcare sector. From featuring primarily as status indicators on control panels, they are now widely used to light up operating theatres, cure cancer, treat tumours, and are even implanted in contact lenses. Their application across the medical field is increasing rapidly.

LEDs were once almost exclusively used as status indicators on circuit boards or control panels. Today, they can be seen almost everywhere. Since LEDs come in small sizes, and consume low current and less energy, they are widely used including in large-area LED displays at stadiums as well as in small, thin, lightweight applications such as status indicators and glow lights. It would not be an exaggeration to say that LEDs have already transformed the luminance industry’s approach towards everyday lighting devices as well as vehicle lights.
Going beyond the lighting applications of LEDs, their utility has been gaining ground in the health sector, too. This article highlights in brief the developments in LED based technologies with respect to medical applications.

Medical applications
Some of the key applications of LEDs in the medical field are discussed here.

Surgical lighting: In comparison to traditional surgical lighting systems that use halogen or gas-discharge bulbs, present-day medical facilities are taking advantage of the inherent characteristics of high-performance LEDs, including their superior lighting capabilities, longer life and reduced power consumption. LED based surgical lights have already become the technology of choice for overhead illumination in the operating rooms (ORs) of many hospitals and dental clinics.

High-performance LEDs are putting surgical lighting and light-applied medical treatments on the cutting edge with high luminous outputs and energy-efficient designs. It is due to these reasons that LED surgical lights produce a high-intensity white light with a high colour temperature for optimum visibility and illumination, which reduce eye strain and mental fatigue among surgical staff, thus enhancing concentration and energy levels throughout the duration of the medical procedures.

Advanced LED surgical lighting systems typically make use of modular panel designs. Each panel is equipped with arrays of high-powered LEDs to provide a superior uniform light. These systems use innovative colour-control technology that helps adjust the colour temperature of the output light while maintaining high colour rendering. This allows optimum surface contrast and enhanced tissue differentiation at the surgical site.

Units are thin and lightweight so they can be attached to mobile stands or manoeuverable boom arms mounted on a wall or ceiling for easy positioning. Moreover, fixtures can incorporate panels of different sizes and quantities to control light output and coverage area.
Another advantage of LED surgical lights is that, unlike conventional lighting devices, these do not radiate heat on the surgical area, which results in an extra measure of comfort for the surgical staff and reduces the air-cooling requirements of the area, thus saving on energy costs.

Further, the low IR (infrared) and UV radiation from LEDs also makes these lights safe for highly-controlled medical environments as they do not interfere with sensitive chemical compounds, diagnostic sensors or specialised treatments. In situations where more localised light is required at the surgical site, LED based surgical headlights can be used. Such lights use a single high-output LED with a high colour temperature to create a powerful beam of white light with a tight lighting field.

Such lights can also be directed to specific areas to compensate for any shadows in the operational area, thus providing more visibility at depth. Super-localised lighting inside the wound area and inside the body is primarily achieved through endoscopic devices that use a flexible or rigid fibre-optic system to transmit light to the inserted tip for internal illumination.

LED endoscopic lighting: Advanced solid-state (that is, LED) endoscopic lighting integrates LED modules at the head of devices in place of fibre optics. High-powered white LEDs are being used as the source of light for these devices because of their high luminous output, dynamic controls and superior energy efficiency compared to traditional light sources. This puts LED sources of light directly at the point of illumination to ensure optimum light quality and emission.

For improved illumination, integrated designs and attachable LED lighting systems are being applied to such medical instruments as examination probes, tissue retractors and surgical forceps. One recent innovation in this domain is the stretchable sheet of tiny micro-LED arrays measuring 100µm, connected across an interlaced circuit mesh, transferred to a flexible polymer sheet and encapsulated in transparent rubber. The sheet is biocompatible and can be attached to a number of surfaces and materials. Flexible micro-LED arrays could even lead to wearable light sources and high-tech surgical gloves.

Treatment with light: In the medical field, phototherapy provides controlled exposure to lights of particular wavelengths (specific colour ranges). Varying light intensities and differing exposure durations treat a variety of medical conditions and sleep disorders, hence promoting improved general health and well-being. LEDs are also affected by the applied wavelength’s ability to penetrate the skin in non-vision-related treatments. In fact, LEDs are becoming the primary light source for such applications because of their high luminous output, energy efficiency and durability.

Arrays of high-powered LEDs or multi-chip modules can be easily integrated into a variety of treatment devices that are used to provide intense uniform light fields with controlled intensity. LED-assisted treatment devices can be portable, handheld applicators that provide a spot beam for small treatment areas, medium-sized lighting panels for partial body coverage or large-scale systems containing thousands of LEDs that can be used for complete body immersion. Such light arrays can also be populated with multi-coloured LEDs, which allow a single device to use a specific wavelength for a desired treatment.

Let us look at a few examples:

Photodynamic therapy: This uses LED light to activate photo-sensitive drugs to treat such skin conditions as severe acne and cancerous skin lesions. The basic treatment consists of applying the dormant drug to the affected area of the skin and then exposing it to a specific wavelength of light, which causes the drug to undergo a chemical reaction and treat the targeted tissue.

Light sources typically consist of arrays of high-output LEDs, which can be used in small lighting instruments for spot treatment, or in moderate-sized lighting panels for larger treatment areas. LEDs are ideal for photodynamic therapy applications because of their ability to emit a consistent, uniform band of narrow wavelength to which applied drugs are closely matched.

Future LED medical applications
By combining LED technology and medical research, several innovations have already been revealed, while others are in development, highlighting the potential of the technology in healthcare applications. LEDs offer innumerable possibilities for future medical improvements, some of which are discussed below.

Elastic micro-LED skin sensor system: A new ultrathin, elastic micro-LED display that fits snugly on the skin has been developed by researchers. This integrated biomedical sensor system, referred to as skin electronics, combines a flexible, deformable display with a lightweight sensor composed of a breathable nano-mesh electrode and wireless communication module. Flexible skin electronics can measure medical data via the sensor, and display information on the screen while transmitting it to the cloud and/or other memory devices.

The system was developed to enhance information accessibility for the elderly or the infirm, who have difficulty operating and obtaining data from the existing devices and interfaces.

A micro-LED wearable device to stimulate fur growth: With the development of vertical micro-LEDs, researchers have revealed a new application to re-grow fur on mice. They have developed a wearable photo-stimulator using a flexible array comprising 900 red vertical micro-LEDs. To test the device, they shaved the heads of mice. After 20 days, the mice that received stimulation from the micro-LED device showed longer fur across a wider area in comparison with those that received some other treatment.

In terms of its (treatment) advantages, the device used about 1000 times less power per unit area as compared to a conventional phototherapeutic laser, without generating the heat levels that cause thermal damage to the skin.

In addition, Imec, in collaboration with Ghent University (Belgium) and SEED, a contact lens producer, has developed LED-light-integrated contact lenses. Transducers have been integrated into the lenses for diagnosing and treating ocular diseases. Scientists also suggested that the lenses could provide a wide range of applications such as drug delivery for eye treatments.

Implantable LED device for curing cancer: LEDs could also be used to heal cancer, according to researchers from Waseda University. The Japanese research team has developed an implantable device consisting of LED chips and a bio-adhesive nano-sheet, which has successfully shrunk tumours in mice through photodynamic therapy.

The device can be attached onto the inner surface of animal tissue where it releases low-intensity irradiation to treat targeted lesions with metronomic photodynamic therapy (mPDT)—a treatment that uses special drugs and particular lights to kill cancer cells with low doses, over the long term. By directly attaching the device with mPDT on the target tumour, the threat to healthy areas is reduced.

Flexible OLED sensor to monitor blood oxygen: A flexible OLED sensor has been developed for detecting blood oxygen levels of skin, tissue and other organs. The OLED sensor has been assembled from a printed sheet of organic photo detectors on the top, and organic red and IR LEDs on the bottom. With organic electronics printed on bendable plastic that moulds to the contours of the body, the sensor can detect blood oxygen levels at nine points in a grid and can be placed anywhere on the skin. By tracking blood-oxygen levels on a larger area, the OLED sensor can monitor how wounds are healing. Such disorders as diabetes and respiratory diseases could also benefit from the application.

IR pain treatment: A company in the US has received clearance to market its LED based IR therapy device developed to provide temporary relief or reduce minor pain or discomfort associated with muscles in the neck and back, caused by muscle tension, joints, arthritis, sprains and strains. The device makes use of low-intensity IR light from an LED source to stimulate natural biological processes in the area where the light is applied. Referred to as photo-bio-modulation or photo-bio-stimulation, the process promotes the body’s own natural healing and tissue immune responses.

To conclude, LEDs have already proven their versatility in the healthcare sector. Coloured light, for example, has a calming effect on patients. This is why hospitals and medical practices are increasingly making use of powerful LEDs for diagnostic and therapeutic purposes.

Dr S.S. Verma is professor at the Department of Physics, Sant Longowal Institute of Engineering and Technology, Sangrur, Punjab.

This article was first published in Electronics For You’s February 2020 issue.