N.Y. Patil, MD, Kyoritsu Electric India Pvt Ltd, has experienced both the hardships and the joys in life. Being part of a large family with a limited source of income meant he had to fund his college education. He did that successfully by setting up a small business that manufactured and sold liquid soap; later, he managed food canteens along with his brother. The lessons he learnt in the process helped him to set up a successful organisation like Kyoritsu Electric India. His journey proves that each one of us has immeasurable power to bring about positive change in our lives.

I was born on May 11, 1952, in a village called Nirmal in the Vasai region near Mumbai. Ours is a family of nine members. Both my parents were school teachers and, hence, discipline was the default way of life for all of us in the family. Our typical day would start at 5.30 in the morning and bedtime would be, at the latest, by 9.30 p.m.

My father was born into a farming family in Saloli village. He completed his matriculation and then his D.Ed. My mother was born in Vasai village, and was also from a family of farmers. She completed Grade 7 and later did her D.Ed.

Being primary school teachers, our parents’ salaries were not sufficient to raise seven children (par-ticularly when all were going through their schooling). My high school was five kilometres away from home. Classes would begin at 7.30 a.m. every day.
Lack of funds meant a routine of walking barefoot to school in the mornings and returning home by the state transport bus.

The school and college years: Lessons learnt the hard way

Sustaining a family of nine was not easy for our parents. So my father started taking tuitions at home after school hours to support his children’s education and ensure that there was enough food on each one’s plate.

There was a time when I owned only a single uniform set, which I would wash twice a week. However, this never hampered my enthusiasm for studies. In fact, these tough times taught me a lot on how to accomplish my goals with limited resources, and keep my personal needs to the minimum.

Hard work always pays off. I got decent marks in my board exams and secured admission into one of the elite colleges in Mumbai at that time, Ruparel College. Hardships were still a part of life and financing my own higher education was the next responsibility to tackle.

I started a small business of manufacturing liquid soaps—for handwashing and to clean utensils—in partnership with one of my college mates. Fortunately, through some of my contacts, I got orders to supply our products to Mahindra & Mahindra
and Otis Elevators.

This minor part-time activity would fetch me a profit of about Rs 150 to Rs 200 a month. The money took care of my fees, hostel accommodation and food. This was truly a turning point in my life because the experience gave me the courage to try something on my own and survive tough situations. It taught me how to become self-sufficient.

Learning asset management and wealth creation at the same time 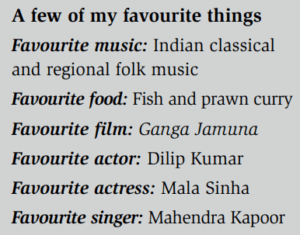 Mathematics and statistics were always the subjects that most appealed to me, so I decided to graduate in these. At that time, one of my brothers was working with the State Bank of India in Mumbai (Bombay, back in those days).

He had also taken up the contract of managing SBI’s canteen. So I joined him in the evenings to help out. As I gained experience, my brother and I also got the contract to manage my hostel’s canteen. This is when I learnt real-life lessons in asset management and wealth creation at the same time!

My first job was as a sales executive with the Chowgule Group. That was when the opportunities to market equipment used by chemical and electrical manufacturing companies were aplenty. I had a flair for marketing and hence started pursuing a six-month
diploma on the subject.

I believe that marketing and sales are two sides of the same coin. Anyone who is good at one, is bound to be a natural with the other. Looking at my performance, Mr P.D. Chowgule himself assigned me some of the important agencies that were associated with us at that time. At times he would accompany me to make pitches to existing as well as new clients. I worked with this company for seven years. Chowgale sir has been, and will always be, the biggest inspiration for me.

I am a person with a positive attitude and the ability to serve my customers well. My approach is always sincere and co-operative, which helps me to build confidence with my customers.

In 1984, I got a job at Amco Electronics as an assistant manager. I was first given the responsibility of working with Olivetti, Italy. Back in 1984, Olivetti was like the IBM of today. It manufactured computers at that time. The account I was assigned was Olivetti Tecnost.

This part of the company was into manufacturing high-end and high precision in-circuit testers (ICTs), function testers, and many other types of testing equipment. At the same time, I underwent 11 months of software training and, as a result, was able to program for in-circuit testing.

Since I always approach my customers with persuasiveness, sincerity and confidence, I generally succeed. I have realised that my convincing approach, and my tendency to listen to customers in order to understand their needs, is what has become my strength.

It was in 1994 that I entered the PCB domain. PCB testing was always a top priority for me. In 2004-05, I started developing testing jigs. By the end of 2005, I was delivering these testing jigs to automotive companies in and around Pune.

At that time, many people were importing testing jigs from Korea, Japan, Malaysia and Singapore. Tescon merging with Kyoritsu, Japan, was a major development back then, and I was a dealer for their products in 2003.

While many people still import in-circuit testing jigs, function-testing jigs and end-of-line testing jigs from other countries, we manufacture these entirely in India, with highly sophisticated and modern infrastructure. With a strong presence in the Asian market since 1994, Kyoritsu Electric India has supplied over 100 ICT machines of Tescon, Japan.

Passing on the legacy

It brings me further joy and pride as my younger son Prashant has decided to carry forward my dream of taking Kyoritsu Electric India to new heights. Prashant is a post-graduate in nautical technology. He has worked in the merchant navy for over 15 years, and chose to leave the profession seven years ago when he was a captain.

I believe that Kyoritsu is poised for further success with a torch-bearer like Prashant since he comes with considerable high calibre technical capabilities as well as new age business acumen, both backed by his global business exposure as a captain
in the merchant navy.

- Advertisement -
Previous article“Our target is to provide the Indian family with convenient, time saving and cost effective solutions for their daily lives”
Next articleSTL And VMware Join Hands On 5G Access Solutions for Telcos and Large Enterprises