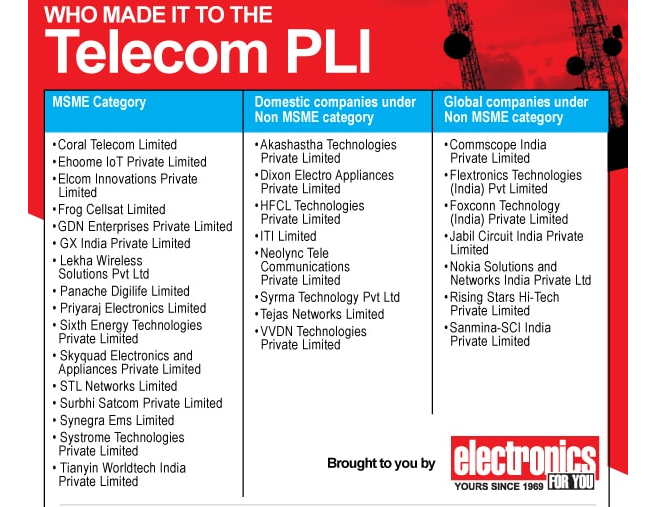 More than 35 firms had shown interest in investing approx. Rs 4500 crore under the production linked incentive (PLI) scheme for telecom gear manufacturing. The government of India, under the scheme, had originally envisaged to attract investments of about Rs 3000 crore

Telecom equipment makers have produced equipment worth over Rs 6000 Cr since the launch of Production Linked Incentive Scheme (PLI) for telecom products. A report by the Economic Times noted that this feat was achieved with an investment of Rs 247 Cr from these manufacturers. These investments include Rs 9.7 Cr from MSMEs, Rs 86 Cr from large Indian manufacturers, and a mammoth Rs 151 Cr investment from MNCs.

More than 35 firms had shown interest in investing approx Rs 4500 crore under the production linked incentive (PLI) scheme for telecom gear manufacturing. The government of India, under the scheme, had originally envisaged to attract investments of about Rs 3000 crore. The scheme stipulates a minimum investment threshold of Rs 10 Crores for MSME and Rs 100 Crores for non-MSME applicants.

As per the guidelines, investments made by successful applicants in India from April 1, 2021, onwards and up to FY 2024-2025 shall be eligible for the scheme, subject to qualifying incremental annual thresholds. The support under the scheme shall be provided for a period of five years, i.e. from FY 2021-22 to FY 2025-26.

DoT has said that the PLI Scheme will be implemented within the overall financial limits of Rs 12,195 Crores for implementation of the scheme over a period of 5 years. The scheme was open to both MSME and Non-MSME companies including domestic and global Companies.

Devusinh Chauhan, Minister of State of Ministry of Communications, had earlier said that PLI Scheme in telecom sector has been launched to realize the Prime Minister’s vision of Atmanirbhar Bharat. It will help in reducing India’s dependence on other countries for import of telecom and networking products. He called upon the industry leaders to focus on making high quality products and expressed the commitment to provide incentives and support to promote world class manufacturing in the country.