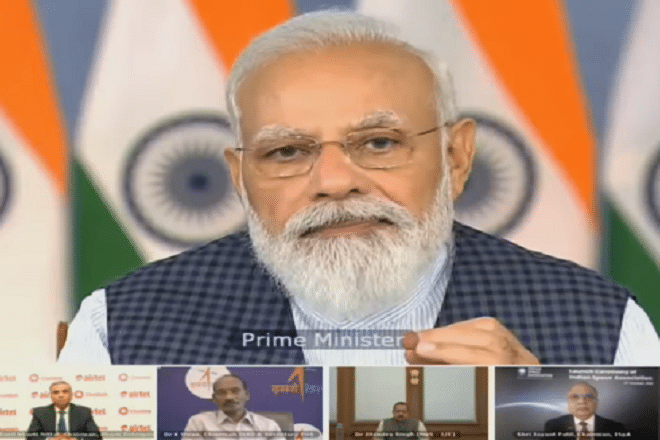 The Prime Minister of India, Narendra Modi, graced the virtual launch of Indian Space Association (ISpA) today. ISpA aims to contribute to the Government of India’s vision of making India Atmanirbhar and a global leader in the space arena, which is fast emerging as the next growth frontier for mankind. The association will engage with stakeholders across the ecosystem for the formulation of an enabling policy framework that fulfils the Government’s vision. ISpA will also work towards building global linkages for the Indian space industry to bring in critical technology and investments into the country to create more high skill jobs.

“India has the potential to become a technology leader and frugal service provider to the global space industry. Led by ISRO, the nation has built a formidable homegrown foundation for the next phase of growth and even launched the lowest cost mission to Moon and Mars. Globally, private enterprises are increasingly contributing to unlocking the possibilities of space. ISpA aims to be a forum of the space industry in the Indian private sector and partner the Government of India and other key stakeholders across space industry segments in making the nation self-reliant in the area as well as to become a global service provider. We thank the Hon’ble Prime Minister for his blessings to this initiative,” noted Jayant Patil, Whole time Director – Defence & Smart Technologies, L&T-NxT, and the first Chairman of ISpA.

Around 10 leaders from the private industry, both from startups as well as established organizations, interacted with the Prime Minister and made the following requests.

Bharti Enterprises’ OneWeb is in advanced talks of signing a satellite launch deal with ISRO. Mittal pointing out that different nations are investing billions of dollars in the space vertical noted that the action taken by the present government will help build better capacities.

Mittal requested the Prime Minister of India to help the industry in speeding up the approval processes associated with the INSPACE industry. However, he also mentioned that the establishment of In is a major step towards the same in itself. He also urged the Prime Minister to keep reviewing the status of the industry every now and then. Mittal noted that he, and the other people in the industry, will be more than happy to share reports on a timely basis.

“We will try our best to keep India the number one nation in the race to space,” noted Mittal. It is worth noting here that OneWeb is launching satellites in space which will ultimately help in establishing broadband internet services in areas like deserts, oceans and even mountains like the Himalayas.

Nelco, one of the largest satellite communication service providers in India, also shared a few requests with the Prime Minister. PJ Nath, Nelco Tata, is of view that the industry and grow, and become the global champion.

“There has been news of the new space com policy launching in India during the last one year. We are sure that a lot of thought and work has been done around the policy but if you can help in launching the policy it will help the industry not only in expanding the horizon but the same will also help in future helping,” Nath requested the Prime Minister.

Owned and operates by the Tata Group, Nelco also requested the Prime Minister to let satellite communication providers to use any frequency that is available. The company shared that some of the policies around the issue and usage of the frequencies is as old as 20 years, and thus need to be reviewed to enable a better platform for satcom service providers. Nelco also requested the Prime Minister to enable companies to buy technologies from outside India, and sell services to parties outside India as well.

Walchandnagar Industries  which has been supplying ISRo with critical components and systems for launches since the 1973, also had a few requests to make to the Prime Minister.

“Now that we have formed ISpA, my request would be that we may be able to work jointly with the Ministry of Finance, the Department For Space and PMO, to possibly create an opportunity for small and medium firms to get access to cost effective capital and potential subsidies for expansion, something similar to what has been given to the manufacturing companies under the PLI schemes,” noted Chirag Doshi of Walchand Industries.

He added, “We need to have a much deeper collaboration between the industry and the leading academic institutions not just from a skilling perspective but also from a research and development perspective.”

The company has participated in the manufacturing of all the space launch vehicles since 1963.

Entrepreneurs requests to the Prime Minister

Pixxel, a startup founded by Awais Ahmed, aims to launch hyperspectral small satellites that will be able to provide 50 times more data than what is available today. The startup has already developed and manufactured its first satellite, and the same was meant to be launched in space from Russia. The company now has shifted the launch from Russia to India after the recent announcement of INSPACE.

Awais Ahmed requested the Prime Minister to help speed up the regulatory approvals from months to weeks. He also promised the Prime Minister that his startup will try its best to fulfill the vision of aatmanirbhar bharat. The startup has a plan to launch 30 satellites during the next two years.

“Pixxel and other startups are made in India for the world. We will try our best to make India the champion country,” shared Awais.

Neha Satak from Astrome Technologies requested the Prime Minister to help enable an ecosystem for startups where the same can test their products and solutions with nominal or no fee at all. This, as per Neha, will help India create more intellectual property around space technologies. She also requested the Prime Minister to encourage government agencies to become anchor customers of startups working around the space technology.

Srinath Ravichandran of startup Agnikul Cosmos urged the Prime Minister to help startups like Agnikul draw clarity on the FDI policy of the country around different areas of the space industry. He also requested the Prime Minister to help conduct a awareness program where all Indians can learn about the possibilities space technology has to offer. Agnikul is the creator of Agnibaan space rocket which is capable of taking upto 100 kg to orbits around 700 km high.

The Prime Minister said that the government encourages industry, young innovators and startups at every level. He elaborated that to develop a strong startup ecosystem, a platform approach is very important. He defined the platform system as “an approach where the government creates open-access public controlled platforms and makes that available to the industry and enterprises. Entrepreneurs prepare new solutions on this basic platform”. The Prime Minister illustrated this with the example of the platform of UPI which became the basis of a strong fintech network. He said similar platforms are being encouraged in space, geospatial fields and for use of drones in various areas.

“Today is the day the Indian space sector receives new wings. For 75 years since independence, Indian space has been dominated by a single umbrella of Indian government and government institutions. Scientists of India have made huge achievements in these decades, but the need of the hour is that there should be no restrictions on Indian talent, whether it is in the public sector or in the private sector. In a way, the country has given a new gift to the talent of India’s entrepreneurs by opening up India’s space sector in its 75th year of independence. Let this collective power of India’s population take the space sector forward in an organized manner. The Indian Space Association (ISpA) will play a huge role in this.”