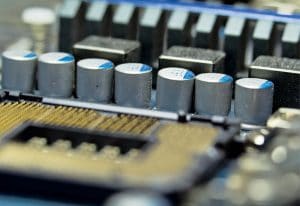 In recent years, the role of power electronics has become crucial in industrial automation and high-efficiency energy systems. Power capacitors help to improve the reliability and operating life of these systems. Read on to discover the latest developments in this field.

The primary function of power electronics devices is to manage, control and transform electric energy accurately in terms of voltage, frequency, current and waveforms. These devices, therefore, depend on passive components such as power capacitors that possess a relatively high specific energy as compared to the standard variants. The good thing is that these power electronics capacitors are capable of withstanding up to one million charge and discharge cycles without significant wear out, thereby helping the power electronics devices to meet the challenging standards that are being set for them today.

In the sections that follow, we will take a look at the technological advances that have happened in this field till now, and also look at the latest launches that are based on these technologies.

Technologies involved
Depending on the dielectric material used, capacitors are broadly divided into fixed and variable types. With miniaturisation being the order of the day, designers of power electronics devices are opting for fixed power capacitors because these are capable of storing a large amount of charge in a small form factor. In fixed power capacitors, the three basic dielectric materials that are used for power electronics devices are aluminium electrolytic, plastic film and ceramic.

According to industry veterans, the most popular power capacitor among these three is the plastic film capacitor. Anil Bali, vice president, Deki Electronics, says that high voltage film capacitors are swiftly replacing high voltage ceramic capacitors because, first, they offer high insulation resistance (nearly ten times more than their ceramic counterparts) and second, they have a very low loss factor, which is almost 30 times less than that of a ceramic capacitor.

“Ceramic capacitors are somewhat non-linear in their frequency and voltage responses, compared to film capacitors. Another issue with ceramic capacitors is that they tend to behave as microphones do, picking up ambient sound and modulating the voltage across them, accordingly. Film capacitors are quite linear and usually better suited for analogue signal processing,” Bali points out while listing the benefits of high voltage film capacitors.
Poornima Hinduja, CEO, Desai Electronics—a company engaged in manufacturing of plastic film capacitors, says that several technological improvements have happened in this space over the past few decades. “Nowadays, the self-healing designs of film power capacitors are employing metallised polypropylene films in place of all-polypropylene films, and dry construction is swiftly replacing oil impregnation designs,” she says. She adds that as devices are now becoming lighter, the film power capacitor casings are making use of flame retardant, UL approved plastic casings wherever possible, in place of the metallic casings.

Market scenario
According to a new GIR (Global Info Research) study, the worldwide market for fixed power capacitors is expected to grow at a CAGR of roughly 2.8 per cent over the next five years, and will reach US$ 2.2 billion in 2023, up from US$ 1.87 billion in 2017.
Experts believe that the demand for such capacitors will continue to rise in the coming years as power electronics is finding many more applications. And the power levels of these capacitors will also increase sharply through technological innovations.

Products available in the market