The G7 countries plan to sign a charter on tech regulation during the annual  meeting in Biarritz, France in August. 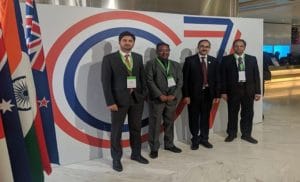 In addition to the Group of 7 nations (Canada, France, Germany, Italy, Japan, the U.K. and the U.S.), officials from Australia, India and New Zealand participated in the discussions.

“In the opening remarks, India focused on harnessing Artificial Intelligence (AI) for bringing inclusive growth and stressed on the need for global cooperation to overcome challenges thrown by AI,” Meity tweeted.

The G7 countries plan to sign a charter on tech regulation during the annual 45th G7 Summit to be held in Biarritz in southwestern France on August 25-27.

In December 2018, the Group of 7 nations announced plans to create a global panel to study the effects of AI. During the meeting on Wednesday, the participating digital ministers also discussed the implementation of this panel.

This would be the seventh time the annual Leaders’ Summit will be held in France. The country had already hosted six Summits since the creation of the group: Rambouillet in 1975, Versailles in 1982, Paris (Arche de la Défense) in 1989, Lyon in 1996, Évian in 2003, and Deauville in 2011.

Indian delegation headed by @SecretaryMEITY is participating in the G7 digital ministers meet in Paris. In the opening remarks, India focused on harnessing AI for bringing inclusive growth and stressed on the need for global cooperation to overcome challenges thrown by AI. pic.twitter.com/0ke3R6yyKS

(With inputs from TechCrunch)

Jewar Airport May Lead to Creation of Electronics Hub Around Yamuna...