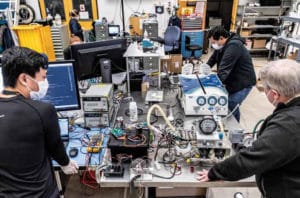 The microscopic coronavirus has upset businesses and lives across the globe. China, where the virus is said to have originated, is today being looked down upon as a manufacturing hub and its reliability is under a deep cloud. India must get its act together quickly, and project itself as the best alternative to countries pulling manufacturing activities out of China. Complacency could help other countries in the region, like Vietnam and Thailand, move ahead swiftly.

The world’s economy is teetering on the brink of collapse ever since COVID-19 started creating mayhem in January 2020. Apart from China and the major European countries, it has resulted in huge setbacks in the fiscal growth of other Asian countries as well, especially India. The stock markets in Germany, France, UK and India have also been massively affected.

Of particular interest to us is the global electronics sector that has driven unprecedented economic growth and employment opportunities all over the world in the past couple of years. But, as in the case of every other sector, the world’s biggest mobile trade show, MWC, which is organised at Barcelona in Spain, was cancelled. Typically, it attracts more than 100,000 visitors each year. The MWC was launched in 2006, but this year, global electronics giants such as Ericsson, Intel, LG, Sony and Nokia announced that they would not be able to participate in the show. The same thing happened with the annual electronics show at Nuremberg that welcomes 150,000 visitors each year.

During this crisis, with flights grounded, ports closed and travel between countries virtually banned, the global supply chain has been affected. The coronavirus has highlighted the essential role China plays in worldwide manufacturing—from clothing and chemicals to mobility, and especially technology. The world’s leading electronics companies set up their manufacturing units in China due to the easy availability of raw materials, lower taxation, and the availability of skilled labour at a lower cost. In fact, most Indian electronics firms source their raw materials and components from China, which account for around 80 per cent of the locally finished product.

But, with COVID-19 locking down  the manufacturing powerhouse of China, it has created FUD (fear, uncertainty and doubt) throughout India, and the world. This is not the first time that the world economy has been hit by a deadly virus originating from China. A 2017 paper by economists Victoria Fan, Dean Jamison and Lawrence Summers estimated the annual losses from a pandemic to be about US$ 500 billion, or 0.6 per cent of the globe’s GDP, per year, accounting for both lost incomes and the intrinsic cost of elevated mortality, Reuters reported. According to experts, the global economic losses incurred during the SARS outbreak in 2003 were US$ 40 billion, while the Ebola outbreak in 2014 resulted in an estimated US$ 2.2 billion in losses in 2015 across Guinea, Liberia and Sierra Leone, though Asian countries, including India, were not affected.

Navkendar Singh, research director – devices and ecosystem, India and South Asia, IDC, says, “Certainly, this is a great opportunity for India to position itself as the next hub for electronics manufacturing and exports. The China-plus-1 model was being evaluated by several companies over the last few years. COVID-19 has just accelerated that process and now companies are seriously looking at viable alternatives to China. India can present itself as a serious contender in the overall global footprint of the companies to manufacture components, as well as finished goods for both domestic consumption and export to other markets.” He adds that Vietnam is a serious competitor to India. It is already seen as a major manufacturing hub across categories with long term planning and enablement plans initiated by the government. However, the size of the economy and labour force is a limitation with Vietnam. India has an abundance of skilled/unskilled workers and the capabilities to compete with Vietnam.

According to reports, various foreign electronics companies have initiated discussions with the senior members of the Indian government. Three hundred of these companies, from sectors ranging from mobile phones to medical devices, are actively pursuing plans of setting up manufacturing in India. Manoj Kumar Pansari, chairman and MD of Astrum, says, “I believe the recent production linked incentive schemes for large scale electronics manufacturing, including the modified electronics manufacturing clusters (EMC 2.0) scheme will boost the ‘Make in India’ and ‘Assemble in India’ campaigns of the government. The government is firming up a plan to offer incentives for companies looking to shift manufacturing units out of China. The benefits will be on the lines of those given to manufacturers of electronic and medical devices. These may include production linked incentives and capital expenditure benefits.”

When questioned about other countries that could turn into manufacturing hubs, Pansari says some large OEMs will migrate to countries such as Vietnam, Malaysia, Philippines and Indonesia, apart from India. Many countries are quickly formulating policies to woo manufacturing companies exiting China. According to the All India Electronics Association, whose members spoke exclusively to Electronics Bazaar, of the 56 companies shifting production out of China, only three relocated to India while 26 went to Vietnam, 11 to Taiwan, and eight to Thailand. The companies prefer autocratic communist countries as there is no bureaucratic lethargy and red tape involved—though, for the record, Taiwan is a democracy. The average Vietnamese member of the workforce is more skilled than an average Indian, thanks to the skills based education system. The country has a less volatile currency and has been competing closely with India in the World Bank’s ‘Ease of Doing Business’ rankings. Given all these advantages, companies prefer to move to Vietnam rather than to India.

Meanwhile, Japan has announced it will create a fund of US$ 2 billion to offer financial  assistance to Japanese companies moving manufacturing out of China, while other countries are also speculated to follow suit. As of now, the names and actual number of companies moving manufacturing out of China haven’t been announced yet, but this news is expected soon. Amit Madan, country manager, India, TransTechnology, says, “From the electronics manufacturing perspective, it takes time to set up a manufacturing base in alternate locations, especially in places like India where the key raw material itself is not manufactured. We feel that over time, many western companies currently manufacturing in China will plan to de-risk their businesses and opportunities, so service providers (read EMS) will emerge not only in India but in other relatively low cost nations such as Vietnam and Thailand too. At the same time, there will also be a tendency to move manufacturing back to the USA and Europe as most developed countries will want to become self-reliant post COVID-19.”

The role of the Indian government
To counter the negative perceptions associated with the Indian manufacturing scenario, the government has taken numerous transformative measures to attract FDI such as reducing corporate tax to 25.27 per cent and further slashing it to 17 per cent for new manufacturers, which is the lowest in South East Asia. With the implementation of the ‘one nation, one tax’ GST and the reduced duties, India aims to attract foreign investments in the electronics manufacturing sector. According to the government, the size of the Indian market is now so huge that it will continue to attract electronics manufacturers on a large scale, because unlike in other countries, companies setting up plants here can sell their products in the local market. In other countries, the only option is to export, owing to the small size of the home market.

Right now, the government in India is focused on kickstarting the economic cycle, which was abruptly halted due to the virus. Since tough times don’t last but tough people do, this is perhaps the best time for the Indian government to position itself as an alternative to China with an abundance of skilled and semiskilled labour. India has all the key factors of production—land, labour, capital and entrepreneurship. The government, too, seems willing to make policy amendments consistent with the demands voiced by key industry bodies.

According to sources at Trans Technology, the Central as well as the state governments have schemes to incentivise startups in the technology and manufacturing space. There are also incentives for exports in over 5000 notified product categories under the Merchandise Exports From India Scheme (MEIS). Several state governments have incentives for setting up manufacturing under the SME (Small and Medium Enterprise) and Make in India initiatives.

Highlighting the role of the government in this sector, Mitesh Modi, president of the All India Electronics Association (AIEA), says, “On March 21, the Centre allocated ₹ 480.42 billion in three key schemes to compete with China and Vietnam in electronics manufacturing.
As per this announcement, the Scheme for Promotion of Manufacturing of Electronics Components and Semiconductors (SPECS) will provide a financial incentive of 25 per cent on capital expenditure for select electronic goods that comprise the downstream value chain of
electronic products, i.e., electronic components, semiconductor/display fabrication units, ATMP units, etc. The scheme will also be applicable for the expansion of capacity, modernisation and diversification of existing units, along with investments in new units.”

Modi adds, “The All India Electronics Association welcomes this move of the government. We would like to coerce the government to immediately announce an economic relief package for SMEs and MSMEs engaged in electronics to tackle the challenges post COVID-19. This will not only save the electronics industry but also save and strengthen the Indian economy. This relief package must include traders and importers who were not able to register themselves as SMEs and MSMEs, but are equally important constituents of the supply chain in the distribution of components to the Indian electronics industry.”

Current trends
In April this year, the government announced a production linked incentive (PLI) scheme for the electronics sector with an outlay of over US$ 5.27 billion. According to a report in the Mint, India exports electronic products worth US$ 9 billion each year, while its domestic market is estimated to be worth US$ 120 billion. ELCINA president Amrit Manwani, while speaking with the Mint, said that global firms that have shown interest in India are US based makers of medical electronic products Teledyne and Amphenol, and medical equipment makers such as Johnson and Johnson. Recently, Vinod Sharma, MD of Deki Electronics, stated in a press briefing that his company is in talks with a South Korean company to manufacture electronic components in India.

Sandeep Aurora, VP, business development and government affairs, IESA, says, “There are certain benefits of manufacturing products close to your customers. We are seeing the shift from China happening largely due to that reason so far, as it’s better for all companies to innovate and make the final product closer to one of their largest markets, India. Going forward, we can see even exports being prioritised from India, looking at the current geopolitical situation.” In India, a majority of local companies are seriously looking for alternatives to China at this moment and are bound to decrease imports from there.