Smart, new-generation technologies, such as the Industrial Internet of Things (IIoT), predictive analytics and smart automation is evolving the way we function. This change is expected to influence an extensive array of functions such as R&D, manufacturing and business support.

To perk up innovation for new-fangled services and products, companies spend billions on research and development (R&D), which also helps in enhancing the quality of existing products. Huge investments in this segment will improve the next generation of technology and play an imperative role in aiding companies resolve the impediments of adapting to legacy platforms.

Innovation also plays an important role in enhancing the capability of companies because it stimulates innovative methods of production and improves product quality. It benefits modern and upcoming businesses with unlimited growth and prospects in the years ahead.

India is the land of unlimited opportunities in business, which have been escalating tremendously for the past few years. The nation is now furnished with a massive market opportunity, proactive government support, cost efficiency, technical competencies, and a highly scalable and low-cost workforce for companies setting up their R&D centres, which is also boosting investment and employment opportunities. Government incentives and such initiatives as Make in India, Startup India, NPE 2019 and FAME, along with augmenting policies, is helping increase the momentum of setting up R&D in India.

Smart, new-generation technologies, such as the Industrial Internet of Things (IIoT), predictive analytics and smart automation, are evolving the way we function. This change is expected to influence an extensive array of functions including R&D, manufacturing and business support.

With time, import and export of electronics have significantly increased in the past few years. To become an exporter of technology rather than a buyer, India needs good investment and infrastructure strategies to offer sustainable conditions for R&D centres. Segments that have shown interest in setting their R&D centres in India, factors responsible for growth, role of government and reasons people should invest in R&D in India are discussed below.

Emerging businesses from such sectors as information technology (IT), automobile, pharmaceutical, telecommunications and so on have observed huge prospects, growth and other opportunities in the Indian market, and are now expanding their manufacturing units and R&D centres. Apart from that, many companies have started their captive technology centres in the country to step up R&D in such areas as the IoT, artificial intelligence (AI) and data analytics. For instance, Vyn’s India development team is now aiming to ally with renowned centres like IITs to carry out their digital transformation services and research initiatives.

Chinese smartphone makers OnePlus and Oppo have announced plans to open their first R&D facility in India. Foxconn, a Taiwanese multinational electronics contract manufacturing giant, has also decided to set up its R&D centre for advanced industrial AI at Hyderabad.

In the automobile sector, Volkswagen has opened a new R&D facility in Pune. And Nissan Motors has signed a memorandum of understanding (MoU) with Kerala state government to set up its first global centre for digital operations in Thiruvananthapuram.

To counter worldwide hurdles via innovation and technology, a joint programme, India-Sweden Collaborative Industrial Research & Development, has been financed by Indian Department of Science & Technology (DST) and Sweden’s Innovation Agency, Vinnova. The two countries will together solve problems related to Smart Cities and clean technologies, and digitalisation/the IoT.

SoftBank-backed robotic process automation company, Automation Anywhere, has announced its plans to invest hundred million dollars in India over the next three to five years to expand its capacities in India. The company has also announced its plan to open four new offices in India to support unprecedented customer and partner growth. Automation Anywhere has said that it would set up more R&D centres in India, and focus on training and upskilling more engineers in automation, apart from creating a partner ecosystem to boost adoption of robotic process automation.

India’s talented scientists and engineers have helped dozens of MNC tycoons in establishing their R&D centres in the nation. For instance, Xiaomi, Apple and LG have commenced their R&D activities in India with more value addition in employment generation. To help these companies further, the government has instituted such measures as instant approval for 5G-based R&D activities and field trials.

Benefits of the massive startup ecosystem

Creation of innovative products not only adds new revenue streams but also increases brand visibility. This also opens up avenues for collaboration and public-private partnerships. Make in India, Startup India and other initiatives by the government of India are aimed at promoting an inclusive, vibrant and sustainable ecosystem for R&D and innovation. The government has also initiated a variety of research programmes in different verticals of technology associated with electronics to support the overall growth of the sector.

It is not only cost for which companies are moving R&D in India, they are also outsourcing their corporate R&D by investing more in startup companies. This will help create breakthroughs in innovations that will help parent companies. IBM, SAP, Microsoft and Google have come forward to invest in India and her startups, or form partnerships with premature service providers in the form of venture funds and evangelism programmes, with a focus on solving problems for customers faster.

Overall, MNCs have understood that forming partnerships with startups in India could reduce both time and risks in the market, and craft a large umbrella of endless opportunities to create and innovate value for people.

Demand for competitive technology will accelerate more investments from big companies.
Further, technology transitions such as rollout of 5G/LTE networks and the IoT will drive accelerated adoption of electronic products. This further augments investments in production, distribution and R&D in the forthcoming years. Now, the time is ripe to focus on R&D, to come up with sustainable solutions custom-made for the Indian market.

Investments currently being made in R&D have been mainly driven by the Central government, with the private sector and state governments found to be lagging. This is in contrast to advanced countries where the private sector is the dominant and driving force of R&D spending.

Government research is being driven by Central Public Sector Enterprises (CPSEs) with majority of research being done by the power and petroleum sector. Ratan Watal, member secretary to Prime Minister’s Economic Advisory Council (PMEAC), has said that growth in R&D expenditure should be commensurate with growth of GDP.

The government is providing the following incentives for R&D based investments:

To encourage investments in R&D, the government of India offers various tax incentives to businesses for carrying out R&D activities. These include incentives on revenue and capital expenditures incurred for carrying out scientific research. Some of these incentives, according to India Briefing, are given below: 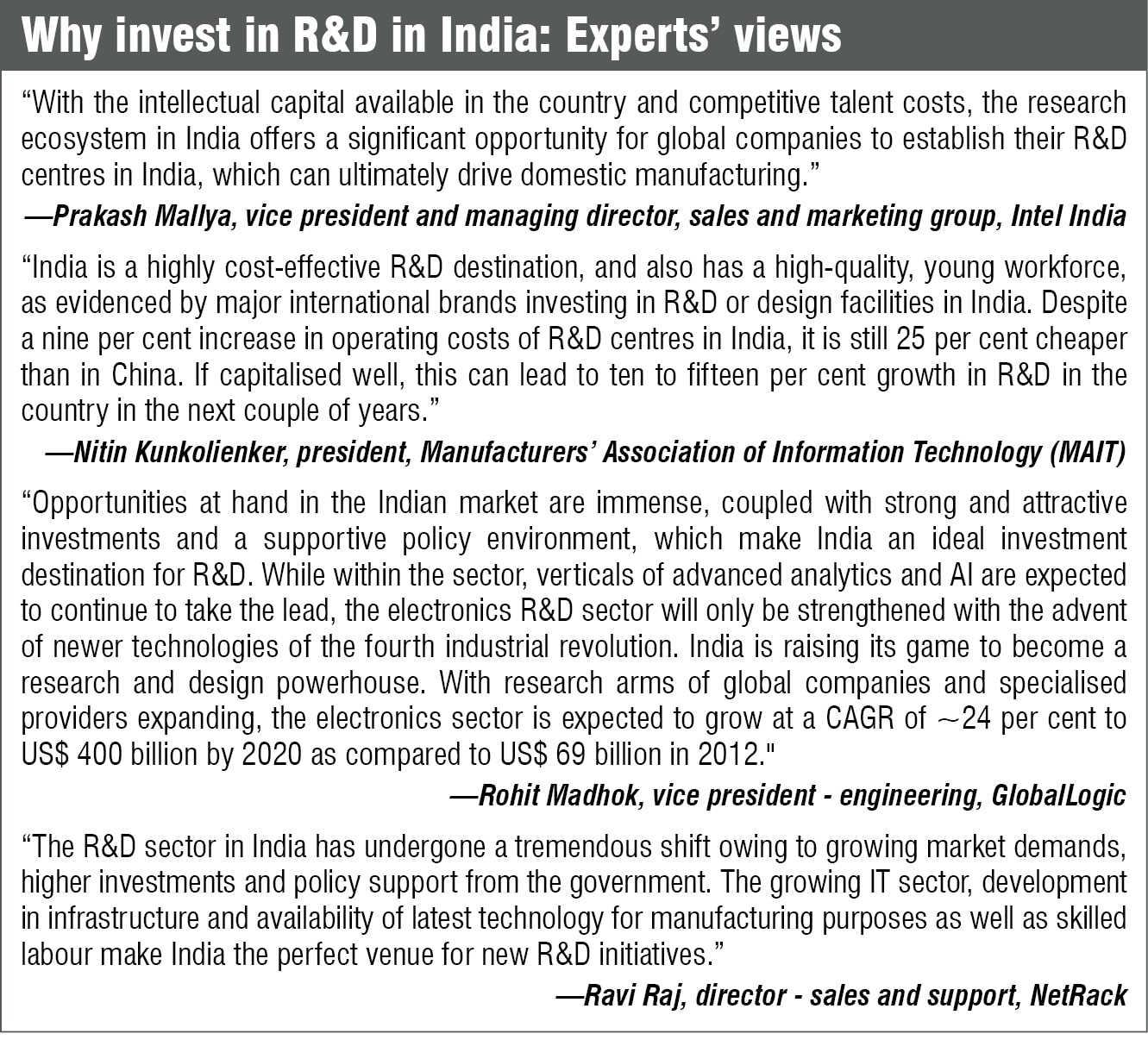 In the Union budget of 2019-20, the government announced a massive investment of US$ 841 million for Ministry of Science and Technology, US$ 369.15 million for Department of Biotechnology and US$ 700.38 million for Council for Scientific and Industrial Research.

PMEAC has released a report titled ‘R&D Expenditure Ecosystem,’ which states that growth in R&D expenditure should be commensurate with the economy’s growth and should be targeted to reach at least two per cent of GDP by 2022. It has remained constant at around 0.6 to 0.7 per cent of GDP, and this is well below major countries such as the US (2.8 per cent), China (2.1 per cent), Israel (4.3 per cent) and Korea (4.2 per cent).

It has been suggested that a minimum percentage of turnover of the company must be invested in R&D by medium and large enterprises registered in India. This will stimulate the private sector’s investment in R&D, from the current 0.35 per cent of GDP. The report also pitched for creating thirty dedicated R&D export hubs in national interest.

Flexible, Printed and Organic Electronics: The Bus India Should Not Miss!