As per this data, solar energy now contributes for approximately 47 percent share in the total renewable energy segment

India added about 11.1 GW of solar capacity from January 2021 till November 2021, as per a report by research firm JMK Research.

This is about 249 percent higher compared to the installations done in 2020.

In terms of cumulative installations, according to the data released by the Ministry of New and Renewable Energy (MNRE), till November 2021, India’s RE installation capacity reached ~104 GW. 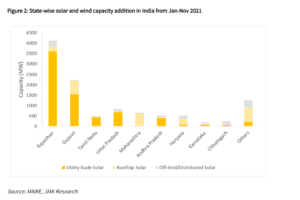 During the January – November 2021 period, about 7 GW of utility scale solar was added.

In the rooftop solar segment, about 2605 MW of new capacity was added during the January to November 2021 period.

Gujarat ranks first among the states with a capacity addition of 660 MW, accounting for nearly 25 percent of the total rooftop installations during the analysis period. Next to Gujarat, Maharashtra (597 MW), Haryana (266 MW) and Rajasthan (225 MW) are the leading states with the maximum rooftop solar capacity addition.