Drones Manufacture In India: Does PLI Make It Attractive Enough? 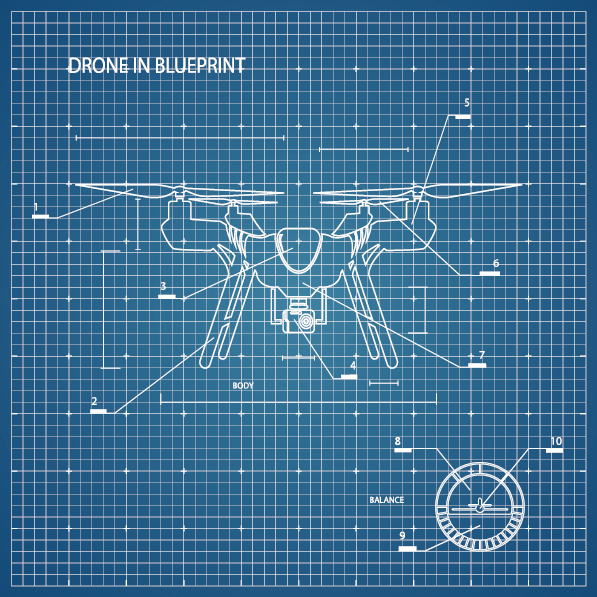 The government of India has introduced a production linked incentive (PLI) for manufacturing drones and their components in the country. Should startups, SMEs, MSMEs, and bigger organisations invest in the sector that is still at a nascent stage? What is the future of drones, and what are the business challenges and opportunities offered by the sector? Let us have a look.

“After the introduction of the new drone policy on August 25, many foreign and domestic investors have invested in drone startups. Many companies are setting up manufacturing units. Army, navy, and air force have given orders worth much more than ₹500 crore (five billion rupees) to Indian drone companies. This is just the beginning, and we don’t have to stop here,” says India’s Prime Minister Modi in his address to the nation via his monthly radio programme Mann Ki Baat.

In one of the episodes, he adds, “Drones are a topic which is dominating the imagination of our country, especially the youth, and India is the first country in the world that is preparing digital land records in its villages with the help of drones.”

As such, this probably might be the first time in history where the government has taken a proactive approach towards a sector that is considered to be still in its nascent stage. Of course, the Civil Aviation Ministry has estimated India’s drone sector to achieve a total turnover of ₹120 to 150 billion (US$1.63 to 2.04 billion) by 2026, from its current turnover of about `800 million (US$10.88 million). However, the opportunities and challenges are not just for India, the whole world is experiencing them! 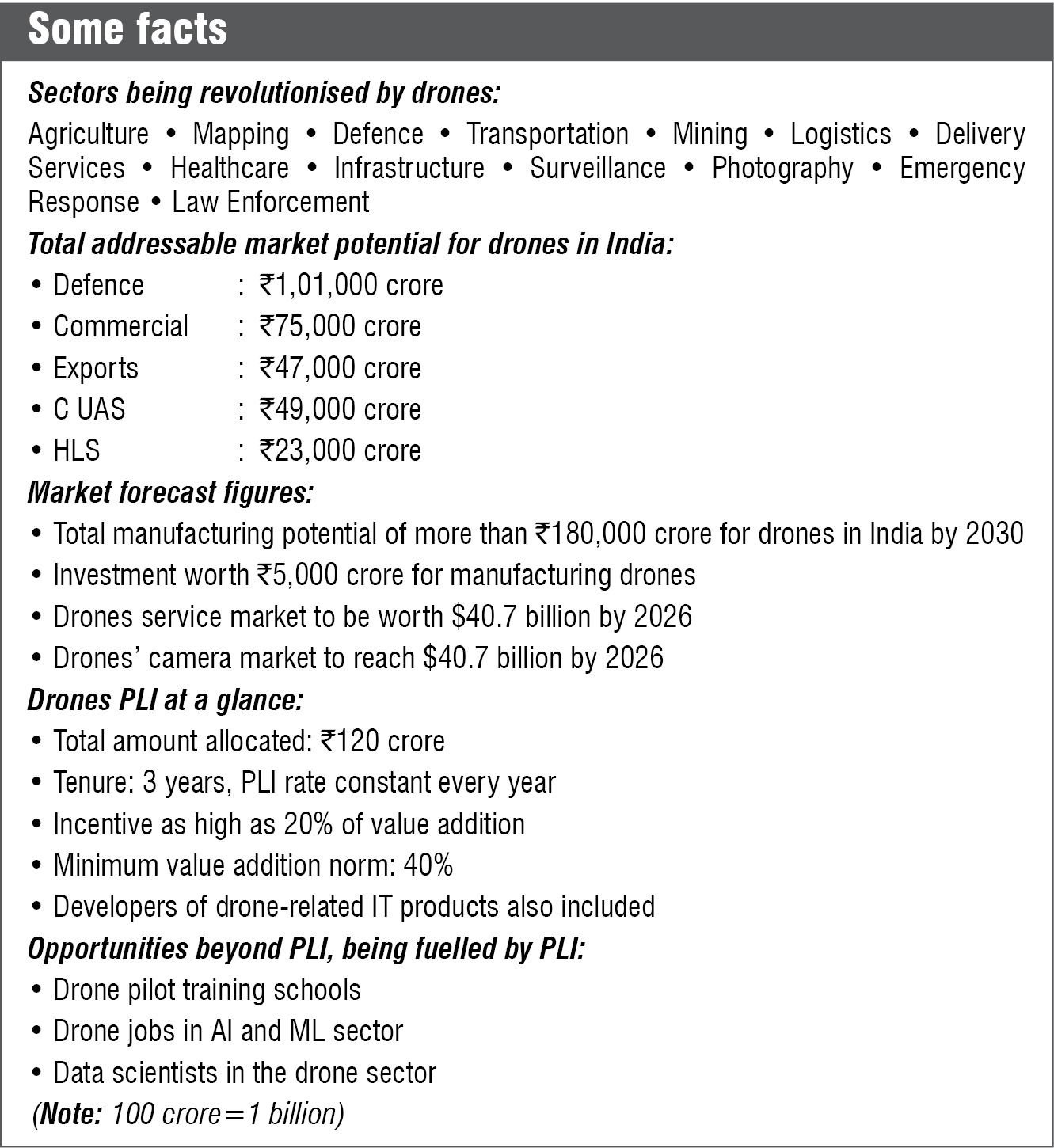 The global market for drones is estimated to reach US$28.47 billion in FY 21-22, and the Bureau of Indian Standards (BIS) research suggests that India will account for roughly 4.25% of this market, even though countries like China, Israel, and the US are currently dominating the market.

Notable in case of India is the government’s PLI scheme for promoting manufacture of drones in the country. Offering incentives worth ₹1.2 billion (US$16.06 million), the policy covers almost every critical component required in a drone and envisages to build an ecosystem that fosters drone manufacturing. The opportunities present are not just for big established organisations, but also for startups. 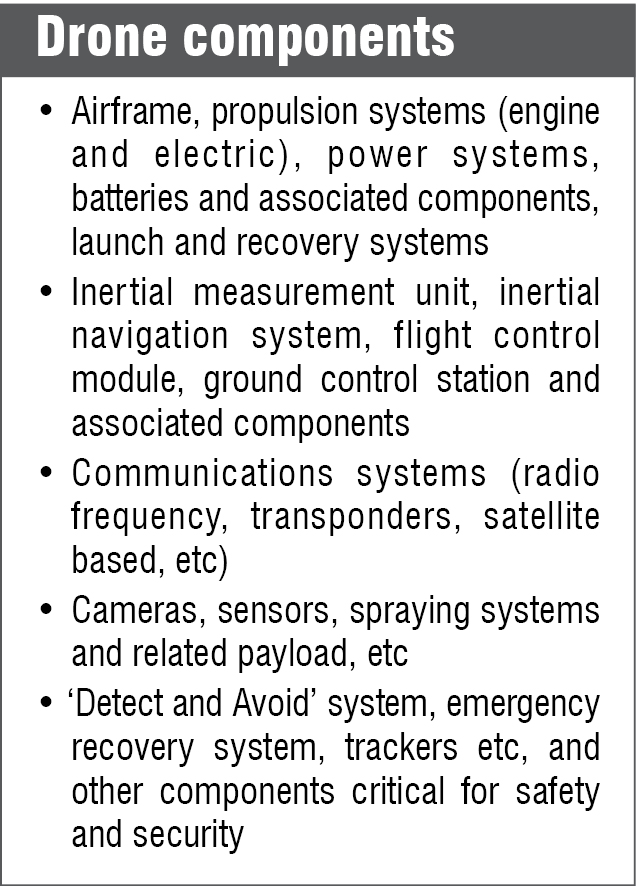 “We have estimated the total manufacturing potential to be more than ₹180,000 crores (1,800 billion rupees) for drones in India by 2030. This is not just an opportunity for the larger companies but also for the hundreds of startups which are operating in this space,” says Rajan Luthra, Head-Special Projects, Reliance Industries Ltd, and Chair, FICCI Committee on Drones and Chairman’s Office.

Sampathkumaran S.T., Vice President-Defence & Aerospace, Adani Group, also has a similar view. He notes, “Size does not matter in the drone vertical. The industry as a whole is at a very nascent stage. Everyone is going through learning, that is, the startup phase, and the field is open for everybody to come and play.”

Vikram Singh Meena, Founder & CEO-TechEagle adds, “The world will see more than two million Indian made drones flying in airspace by 2030 because of initiatives like liberalised drone policy and PLI scheme.”

Let’s talk about the PLI first

The graph on last page makes it evident that drones are not just here to stay but to rule every segment they are used in. Moreover, the deployment of drones for mapping villages in India is a clear indicator of the trust and confidence the government of India has in the sector. As a matter of fact, the government itself has admitted that drones can benefit sectors including but not limited to agriculture, mining, infrastructure, surveillance, emergency response, transportation, geo-spatial mapping, defence, and law enforcement.

It is clear that this scheme is a follow-through of the liberalised Drone Rules, 2021 released by the Central government on 25th August 2021. The PLI scheme and new drone rules, as per the government, are intended to catalyse supernormal growth in the upcoming drone sector. 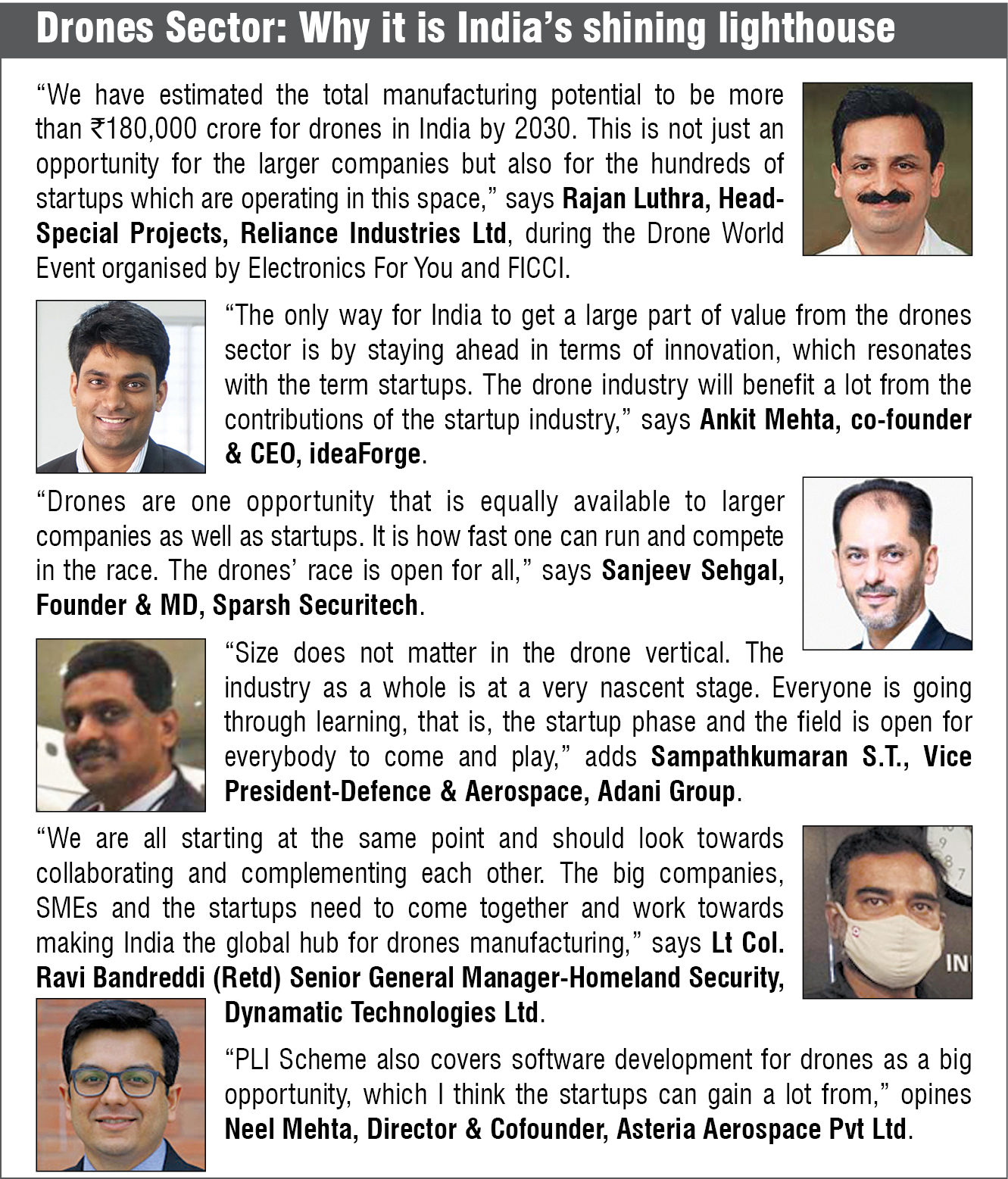 Jyotiraditya M. Scindia, Union Minister of Civil Aviation, while informing about the incentives worth 1.2 billion rupees (₹120 crore), notes the amount would be 1.5 times the combined size of the manufacturing drone sector. He also mentions the objective of establishing India as a global drone hub by 2030 and says that the Ministry of Civil Aviation is committed to facilitate industry, service delivery, and consumers in achieving the aforesaid target.

“Over a period of three years, estimated investment worth ₹5,000 crore (₹50 billion) for manufacturing sector drones will be done, which in turn will bring a turnover of ₹ 900 crore (₹9 billion), along with 10,000 job opportunities being created,” he explains.

“We are all starting at the same point and should look towards collaborating and complementing each other. The big companies, small and medium sized enterprises (SMEs), and the startups need to come together and work towards making India the global hub of drones manufacturing,” says Lt Col. Ravi Bandreddi (Retd), Senior General Manager, Homeland Security, Dynamatic Technologies Ltd.

The PLI for drones stands out on a lot of fronts, when compared to PLIs for various other sectors. Like other PLI schemes, the government, via this, is aiming to give incentives to drone and its component manufacturers based on the incremental production achieved by the latter. It stands out from other PLIs in the form that there is no threshold year set by the government to calculate incremental production. Instead, there is a threshold mentioned by the government, and anyone who crosses that threshold can apply for availing benefits.

The method of computing incentives around the PLI is also unique when compared to other sectors. It is based around the amount of local value addition in drones and drone components. In nutshell, the government is aiming to provide 20% of the total local value addition (capped amount) back to the manufacturer. This clause stands true for drones and drone components.

“It is my strong belief that this PLI scheme will drive a lot of companies to look towards manufacturing drones in the years to come,” says Sampathkumaran.

What makes the PLI for drones extraordinarily special is the way it has been crafted. Though the amount involved in the PLI is about ₹1.2 billion for three years, it restricts a handful of companies to qualify for the incentives. Two or three big companies, as per Sampathkumaran, coming and taking away all the benefits is not at all possible, and there’s enough room for SMEs, MSMEs, and startups to participate in the scheme.

Speaking of equal opportunity for all the players, the PLI for drones has also taken into account IT developers of drone-related IT products. As a matter of fact, the scheme also covers software development for drones, which is probably the first PLI that takes both IT developers as well as software for drones into consideration. As they both are more or less connected to the way drones are deployed, the highlight here is the drone services market size. As per a report by Markets & Markets, it is expected to reach $40.7 billion by 2026 from $13.9 billion in 2021, and the Asia Pacific market is forecast to register the highest CAGR in terms of growth during the forecast period.

On the same page

Yes, the biggest opportunity is in manufacturing drones and their related components, but an equal (maybe bigger) opportunity for startups, SMEs, and MSMEs lies in being successfully able to collaborate with bigger organisations. It is clear that the likes of Adani and Reliance are serious about the drone vertical. The proof of the pudding also lies in announcements made over the last few months.

DCM Shriram Industries, during August 2021, announced that it had bought 30% stake in Turkish drone manufacturer Zyrone Dynamics Havacilik Danismanlik. The duo plans to work towards marketing drones in India and the rest of the world. It was also in the same month that RattanIndia Enterprises had announced investment in Matternet. The latter is known as the world’s most extensive urban drone logistics platform.

However, to make sure that this PLI for drones is successful in not only enabling a local ecosystem of drone manufacturing in India but also in making India the go-to destination for drone manufacturing, service providers, drone component manufacturers, and startups, we will have to be on the same page. The easiest way to do so for the larger companies is to rely on startups for sourcing software and components. And for the SMEs, MSMEs, and startups, the key to success lies in crafting products that do not just appeal to India but to drone companies outside the borders of the country as well.

Dynamatics is setting an example by collaborating with Indian startups in terms of developing and sourcing critical components like sensors, communication systems, and more. Along with Adani group it has already started welcoming startups who wish to work with them. 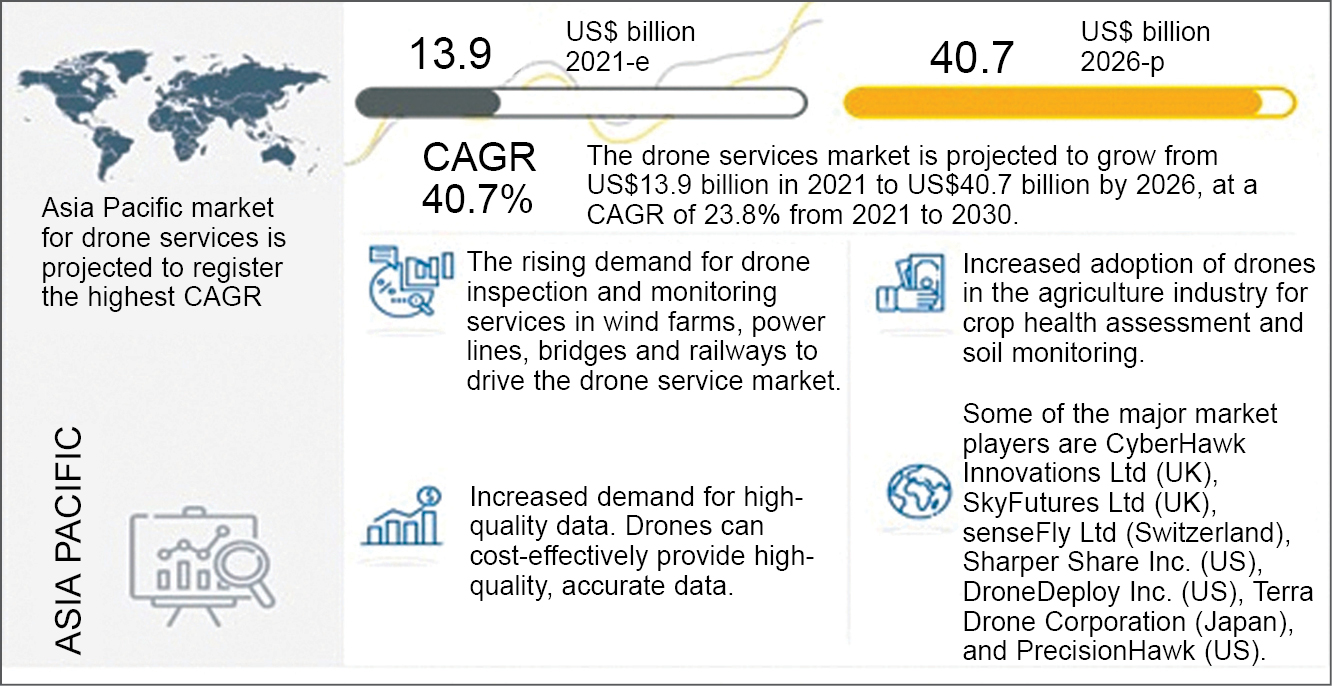 “The opportunities are present equally in all the verticals of drones, be it components, system integration, data analytics, or services. The intent of the government is very clear, the drone sector is of strategic importance and the government wants to make India the global hub of manufacturing drones,” feels Neel.

Sparsh Securitech, credited for making CCTVs in India, is thinking of getting into manufacturing camera technology for drones. It is of the view that the segment is a quite promising one, especially for camera and imagery solution providers. A drone that is not enabled with vision (cameras) is quite difficult to even imagine. The global drone camera market, which was valued at $3.33 billion in 2019, is projected by Allied Market Research to reach $25.39 billion by 2027, registering a CAGR of 29.9%. Asia Pacific, once again, is projected to exhibit the highest CAGR of 31.3% during 2020-27.

“Cameras for drones are the key components that enable photos and video feeds via drones. We believe what was done for CCTVs in 2008, we can do the same for drone camera manufacturing in the coming years,” says Sanjeev.

The point to be noted, in terms of components like cameras, communication systems, radars and more, is the opportunity that would arise from the anti-drone sector. This, in addition to the drone sector, also spells chances to cash-in for companies on both the drone as well as anti-drone systems.

This article has been prepared by Mukul Yudhveer Singh, Business Editor, Electronics For You, based on a panel discussion held during the Drone World Event in October 2021 on Tech World Congress platform.

“In Another Six Months The Battery Problem Will Be Behind Us...

Shivnath Thukral Appointed as Director of Public Policy for all Meta...

UBI Ties Up With Tata to Aid Solar Rooftop Adoption in...