US takes new trade action against India over solar power 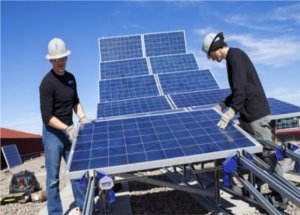 Thursday, February 13, 2014: The Barack Obama administration has filed a case at the World Trade Organisation over India’s solar programme. It is the second WTO challenge that the Washington has made. In a public statement, the US launched a fresh challenge for India’s domestic content requirements for its national solar power programme, on Monday.

Stating that the second phase of national solar programme announced in October last year, is a discrimination against the US manufacturers, US launched a challenge to India’s domestic requirements for the national solar power programme. A corresponding complaint with WTO has already been filed, informed the US trade representative Michael Froman, as he addressed the press.

India’s solar programme was launched in 2010, which is said to discriminate against US solar equipment manufacturers. The solar energy producers are expected to use Indian-manufactured solar cells and modules. The government is offering subsidies to those developers, who are making use of domestic equipment instead of imports, stated the US trade office. The US filed a challenge with WTO over elements of India’s national solar programme stating violation of a core global trade rule. The programme aims to double India’s renewable energy capacity by 2017.

The USTR issued its first challenge to India’s solar programme in February, last year, stating a formal request of consultations. Countering to US, India released a statement on Tuesday, saying it will respond to any US trade action. “We may also have some issues with them with regard to solar. We may also have an application or may move the WTO,” said the trade minister Anand Sharma.

The trade conflicts between the two nations continues with the recent arrest and indecent verification a of woman Indian diplomat in New York, stating visa fraud charges. India, immediately retaliated seeking measures against US diplomats. The US-India relations have been sour since, even more so after India tested a nuclear device in 1998.