The cities to get electric buses for the first time are Moradabad, Jhansi, Bareilly, Shahjahanpur, Ghaziabad, Gorakhpur and Aligarh 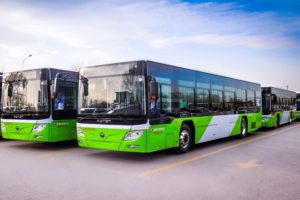 Looking to curb the rising pollution levels in the country, the Uttar Pradesh government is aiming to launch 700 electric buses across 14 major cities in the state, seven of which have already had them operating since earlier.

The cities to get electric buses for the first time are Moradabad, Jhansi, Bareilly, Shahjahanpur, Ghaziabad, Gorakhpur and Aligarh.

As per a report by IANS, a government spokesman has informed that work is underway at a tremendous speed and more buses will be added to the fleet in the coming days and the routes will be upgraded to make buses run faster.

Chief Minister Yogi Adityanath said in a statement that this initiative will greatly improve the traffic conditions in these 14 cities. The UP government has also issued strict instructions to prepare charging stations at all selected locations for the operation of electric buses by April 30.

The UP government has also approved the Urban Transport Directorate to initiate work on the project.

Ajit Singh, Joint Secretary, Urban Transport Directorate, said, “The work of providing 700 electric buses in 14 cities of UP will be completed by the end of October and passengers will get the facility of electric buses from the month of November.”