To date, EESL/CESL has installed 301 EV chargers across India

India is riding high on the electrification vision with as many as 1,590 electric vehicles deployed in more than 160 Central and state government departments in 49 cities, as per data presented by the minister of state for heavy industries Krishan Pal Gurjar in the Rajya Sabha.

These e-cars are being given on a lease/outright purchase basis to replace the existing petrol and diesel vehicles taken on lease earlier, said an official statement.

EESL/CESL is also developing Electric Vehicle Charging Infrastructure and has signed MoUs with multiple stakeholders across municipalities, DISCOMs for location assessment study and setting up of charging infrastructures in their jurisdiction location.

To date, EESL/CESL has installed 301 EV chargers across India. 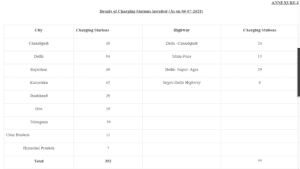 The government has also approved plenty of policies to promote the adoption of EVs in the country, including the National Electric Mobility Mission Plan (NEMMP) 2020 and the FAME (Faster Adoption and Manufacturing of Hybrid & Electric Vehicles in India) India Scheme.