According to the report, while 2021 was the most significant year for the Indian solar industry, with over 10 GW of installations, 2022 is slated to be an even stronger year

India installed over 3 GW of solar capacity in the first quarter (Q1) of the calendar year (CY) 2022, a quarter-over-quarter (QoQ) increase of 21% compared to 2.6 GW installed in the previous quarter, as per a report by Mercom India

On a year-over-year (YoY) basis, installations rose by 50% from the 2 GW installed in the same period last year.

According to the report, while 2021 was the most significant year for the Indian solar industry, with over 10 GW of installations, 2022 is slated to be an even stronger year. 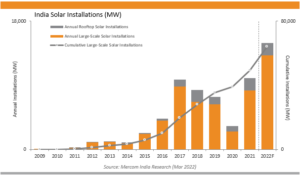 Large-scale solar accounted for 85% of the installations, and rooftop accounted for the remaining 15% during the reporting period. India’s cumulative installed solar capacity now stands at 52 GW.

India has a utility-scale projects development pipeline of over 54 GW.

Rajasthan became the first state to cross 10 GW of cumulative large-scale solar installations at the end of March 2022. The state accounts for 24% of the total installations in the country.

Rajasthan and Gujarat were the top states for solar during the quarter, accounting for 52% and 18% of installations, respectively, followed by Karnataka with 6%.