As per figures drawn by World Semiconductor Trade Statistics (WSTS), sales in June were 2.1 per cent more than the May 2021 total of $43.6 billion 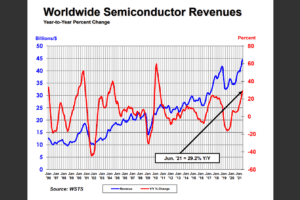 As per figures drawn by World Semiconductor Trade Statistics (WSTS), sales in June were 2.1 per cent more than the May 2021 total of $43.6 billion.

“Second-quarter semiconductor sales were up significantly compared to Q2 of last year, increasing across all major product categories and in every major regional market,” said John Neuffer, SIA president and CEO.

“Demand for semiconductors is projected to continue to rise substantially in the long term, as the world continues using chips to become smarter, greener, more productive, and better connected,” Neuffer added.

The semiconductor shortage has crippled the production capability of various industries. What started with the automobile industry has now begun to impact PCs and smartphone manufacturers. Exacerbated by the pandemic, various companies do not expect the crisis to end any time soon, with many predicted it to last till mid-2022.

Month-to-month sales increased in the Americas by 5.4 per cent, Japan by 2.5 per cent, Europe by 2 per cent, China by 1.1 per cent, and Asia Pacific/All Other by 1 per cent.

Monthly sales are compiled by WSTS and represent a three-month moving average. SIA represents 98 per cent of the U.S. semiconductor industry by revenue and nearly two-thirds of non-U.S. chip firms.